The biodiversity of Beaded Lizards.

Helodermatid Lizards are the only extant lizards that are truly venomous (Monitor Lizards such as the Komodo Dragon, Varanus komodoensis, deliver a bite laced with harmful bacteria, but are not actually venomous). There are two extant groups of Helodermatid Lizards; members of the genus Heloderma, currently restricted to the southwestern United States, western Mexico and Central America, where they inhabit deserts and semi-deserts as well as dry woodlands and grasslands, and the Bearded Dragons of the genus Pogona, which occupy similar areas in Australia.

The Mexican Beaded Lizard (Heloderma horridum) is found in seasonal Pine-Oak dry forests from southern Sonora State south to Guatemala. It is larger than the Gila Monster, sometimes exceeding 90 cm in length, and more variable, with four subspecies defined from across its range, defined on the basis of scale patterns, colouration and distribution. The large size and potentially dangerous nature of this Lizard has brought it into conflict with humans across much of its range, both due to habitat loss to agriculture and more direct conflict with rising human populations.

In a paper published in the journal Amphibian & Reptile Conservation in July 2013, Randall Reiserer of the Copperhead Institute in South Carolina, Gordon Schuett of the Copperhead Institute and the Department of Biology and Center for Behavioral Neuroscience at Georgia State University, and Daniel Beck of the Department of Biological Sciences, Central Washington University, discuss the results of a genetic study of the populations of Beaded Lizards from which they conclude that the four subspecies are genetically distinct and ought to be elevated to species level.

See also Two new species of Woodlizard from northeast Peru
Based upon this study there are now considered to be four species of Beaded Lizards. Reiserer et al. note that this will require the re-examination and classification of a large number of museum specimens.

The Río Fuerte Beaded Lizard (Heloderma exasperatum) is found in the drainage basins of the Río Mayo and Río Fuerte in the foothills of the Sierra Madre Occidental, where it inhabits an area of subtropical dry forest covering parts of Sonora, Chihuahua and Sinaloa States. Heloderma exasperatum is brown with speckled yellow markings, juveniles being grayer, with larger markings, more spots than speckles. 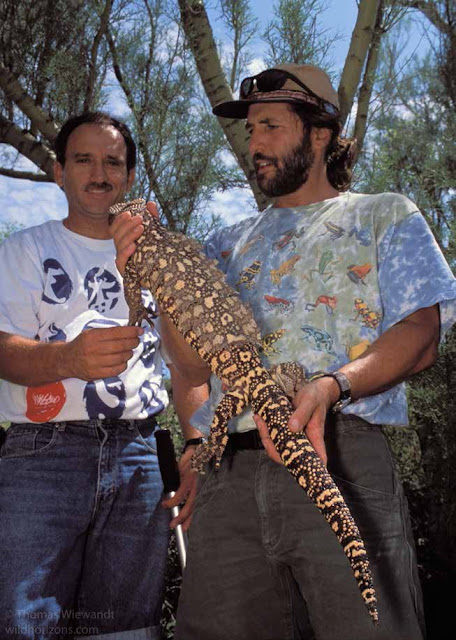 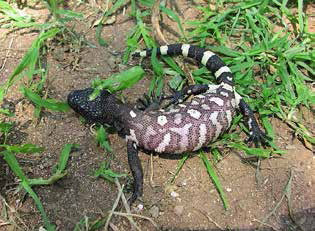 
Mexican Beaded Lizard, Heloderma horridum, has the widest distribution of the group, being found in dry forests from Sinaloa State south to Oaxaca, via Jalisco, Nayarit, Colima, Michoacán, and Guerrero, and inland to México and Morelos States. These Lizards are grey-brown in colour with yellow markings, the contrast being more marked in juveniles. 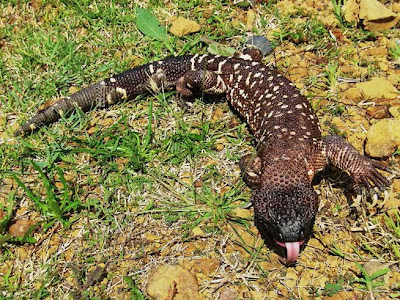 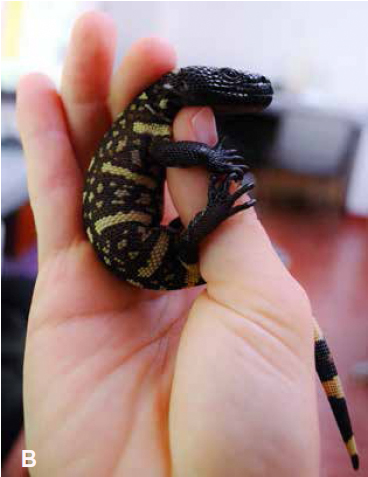 
Chiapan Beaded Lizard, Heloderma alvarezi, is found in dry forests in the Río Grijalva Depression of central Chiapas State in Mexico and the Río Lagartero Depression in western Guatemala. These Lizards are grey or brown with yellow markings as juveniles, but largely lose these markings as adults, becoming essentially monochrome in colour, and the only Beaded Lizards to lack tail banding. 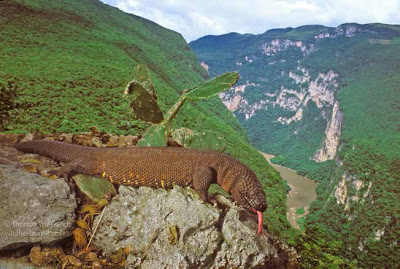 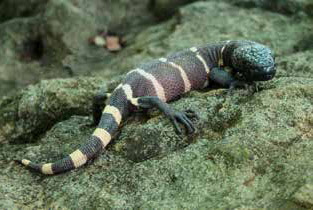 
Guatemalan Beaded Lizard, Heloderma charlesbogerti, is found in Río Motagua Valley on the Atlantic coast of Guatemala, with reports of additional populations on the Pacific coast. These Lizards are dark grey, with mottled yellow markings, the juveniles tending to be paler than the adults. 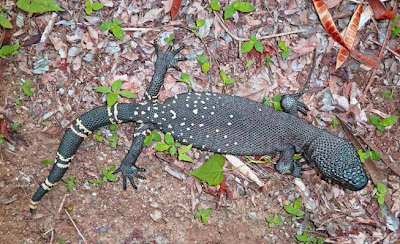 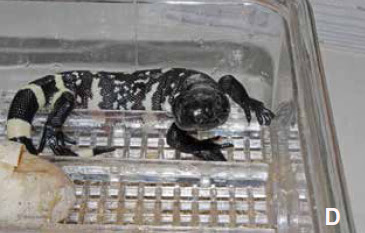 
This reclassification of Beaded Lizards has implications for their conservation. Beaded Lizards were formerly classified as 'Vulnerable' by the International Union for the Conservation of Nature, but have recently been raised to 'Least Concern' after a review of the criteria used, though the Guatemalan Beaded Lizard remained classified as 'Critically Endangered', and all Beaded Lizards in Mexico are regarded as 'Threatened' under Mexican law, giving them similar legal protection to species classified as internationally Vulnerable. This review, which suggests that not only are the Lizards separated by habitat fragmentation but by reproductive boundaries, is likely to lead to a re-examination of this status.