A new species of Albanerpetontid Amphibian from the Early Cretaceous of the Isle of Wight.

The Albanerpetontid Amphibians were a distinct order of Lisamphibians (the group that includes all modern Amphibians and anything else descended from their most recent common ancestor) known in the fossil record from the Middle Jurassic to the late Pliocene. They were morphologically conservative, resembling Salamanders in shape (though they were distinctive). A single known specimen with preserved skin was scaly and had eyelids, implying a dryer habitat preference than Salamanders, though it is not known if this applied to the whole group.

In a paper published in the April 2013 edition of the journal Acta Palaeontologica Polonica, Steven Sweetman of the School of Earth and Environmental Sciences at the University of Portsmouth and James Gardner of the Royal Tyrrell Museum of Palaeontology describe a new species of Albanerpetontid Amphibian from the Early Cretaceous Wessex Formation of the Isle of Wight.

The new species is named Wesserpeton evansae, where 'Wesserpeton' means 'creeping animal from Wessex' and 'evansae' honours Susan Evans of University College London, a distinguished microvertebrate palaeontologist who has make important contributions to our understanding of the Albanerpetontids.

Wesserpeton evansae is described from a series of disarticulated, mostly partial, skeletons comprising frontal (forehead) bones, premaxillae (front part of the upper jaw), maxillae (remainder of the upper jaw), fragments of dentary, a number of fragmentary articular and angular bones (bones connecting the lower jaw to the skull, fused in Albanerpetontid Amphibians and moved to the inner ear in Mammals), a single prearticular, a variety of vertebrae, one complete and several partial humeri and several partial ilia. 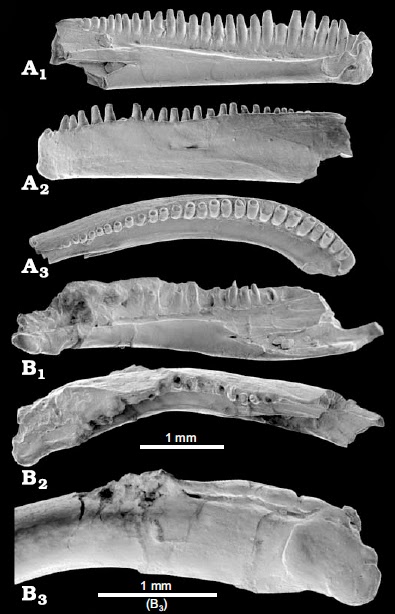 Scanning electron micrographs of two nearly complete dentaries of the Albanerpetontid Amphibian Wesserpeton evansae from the Barremian Wessex Formation at Yaverland on the Isle of Wight. (A) substantially complete left dentary missing most of area for attachment of post−dentary bones in lingual (A₁), labial (A₂), and dorsal (A₃) views. (B) Right dentary preserving similar amount of bone, but with pathological anterior portion in lingual (B₁) and dorsal (B₂) views; enlargement of the anterior end in ventral view (B₃), showing bony callous and distortion in region of possible healed fracture and re−modelled symphyseal surface. Sweetman & Gardner (2013).