Kepler 63b; a giant planet in a polar orbit.

KIC 11554435 (or Kepler Input Catalogue 11554435) is a young, sunlike star 652 light years from the Earth. It is thought to be between 200 and 300 million years old with a mass 98% of the Sun's and an effective surface temperature of ~5576 K, as opposed to 5778 K for the Sun. As a young star it rotates considerably faster than the Sun, roughly once every 5.4 days, while the Sun takes slightly under 24.5 days to complete a rotation, and has a high level of starspot activity (the same as sunspot activity but on a different star).

In a paper published on the online arXiv database at Cornell University Library on 26 August 2013, and accepted for publication in The Astrophysical Journal, a team of scientists led by Roberto Sanchis-Ojeda of the Department of Physics and Kavli Institute for Astrophysics and Space Research at the Massachusetts Institute of Technology, describe the discovery of a superjovian planet in orbit about KIC 11554435 by the Kepler Space Telescope. The system is renamed Kepler 63, with the star becoming Kepler 63A and the planet Kepler 63b (naming conventions dictate that stars are given upper case letters and planets lower case letters).

Kepler 63b orbits Kepler 63A every 9.43 days at an estimated distance from the star of 0.08 AU (8% of the distance at which the Earth orbits the Sun), making it a 'Hot Jupiter' type planet, transiting the star (passing in front of it from out point of view) as it does so. It has a highly oblique orbit, at 104° to the plane of the star's rotation. Kepler 63b has a radius 6.1 times that of Jupiter, and while it was not possible to determine its mass, this was given an upper limit of 120 times that of Jupiter.

Sanchis-Ojeda et al. were also able to detect a particularly large and apparently permanent starspot (or cluster of starspots) close the the pole of rotation of Kepler 63A that is turned towards us. This moves around the pole with the star's rotation, so that it is sometimes in line with the orbit of the planet and sometimes not. 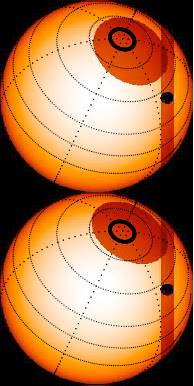 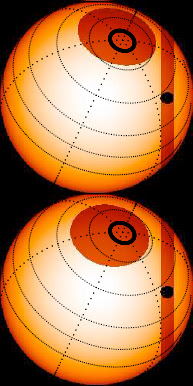 Locations of the spot, transit chord, and planet at midtransit, according to the best-fitting model. Sanchis-Ojeda et al. (2013).

See also A superjovian exoplanet directly imaged orbiting the A-class pre main-sequence star HD 95086, The debris disk of 49 Ceti, The planets of NN Serpentis, Water and Hydroxides in the Circumstellar Disk around HD 163296 and The formation of a Keplerian Disk in the L1551 NE Protostellar System.