The United States Geological Survey recorded a Magnitude 4.4. Earthquake at a depth of 36.9 km, roughly 6 km to the east of Oshnavieh in West Azerbaijan Province in the far northwest of Iran, slightly after 1.30 pm local time (slightly after 10.0 am GMT) on Friday 27 September 2013. A quake of this size at this depth is unlikely to have caused any damage or casualties, but is likely to have been felt over a wide area. 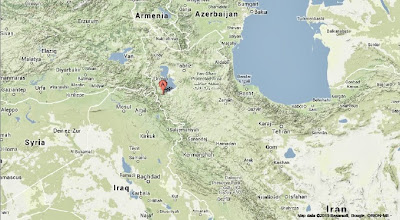 The approximate location of the 27 September 2013 Oshnavieh Earthquake. Google Maps.


Iran is situated on the southern margin of the Eurasian Plate. Immediately to the south lies the Arabian Plate, which is being pushed northward by the impact of Africa from the south. This has created a zone of faulting and fold mountains along the southwest coast of the country, known as the Zagros Thrust Belt, while to the northeast of this the geology is dominated by three large tectonic blocks, the Central Iran, Lut and Helmand, which move separately in response to pressure from the south, stretching and compressing the rock layers close to the surface and creating frequent Earthquakes, some of which can be very large.