The United States Geological Survey recorded a Magnitude 2.5 Earthquake at a depth of 900 m in southern Van Buren County, Arkansas, slightly after 0.35 am local time (slightly after 5.35 am GMT) on Sunday 15 September 2013. This is a fairly small quake, and is unlikely to have caused any damage or injuries, but it was felt as far away as Conway, 35 km to the south. 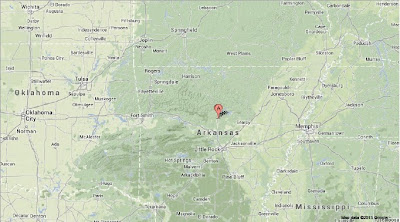 The approximate location of the 15 September 2013 Arkansas Earthquake. Google Maps.


Central Arkansas has been suffering an ongoing series of Earthquakes that began in August 2010, and which collectively are referred to as the Guy-Greenbrier Earthquake Swarm. This has been linked to the use of Hydraulic Fracturing (Fracking) in the area, not directly by the process itself (which involves water, sand and chemicals are forced into buried sediments at considerable pressure in order to shock them into releasing trapped hydrocarbons, is often linked to Earthquakes), but by the practice of pumping waste water from the process into deep wells.

The process was banned in the area in 2011, following recommendations from the United States Geological Survey, and two oil companies operating in the region, Chesapeake Energy and BHP Billiton reached an out of court settlement with local residents who claimed their homes had been affected by quakes caused by the process in August 2013.