A short-snouted Ceratopsid Dinosaur from the Late Cretaceous of southern Utah.

Ceratopsid Dinosaurs were a speciose group of large, herbivorous Dinosaurs from the Late Cretaceous of Asia and North America. They were large, quadruped Dinosaurs with distinctive neck-frills and horns, and many vertebrate paleaontologists have speculated that the large number of species may have been the result of sexual selection, as in many modern Mammals. The group do not show any great ecological diversity, but each species has a distinctive arrangement of horns and frill-ornaments; if this is a result of sexual selection it is likely that the males and females of many species have been described separately.


In a paper published in the Proceedings of the Royal Society Series B Biological Sciences on 17 July 2013, a team of scientists led by Scott Sampson of the Denver Museum of Nature and Science, the Department of Geology and Geophysics at the University of Utah and the Natural History Museum of Utah, describe a new species of Ceratopsid Dinosaur from the Late Cretaceous Kaiparowits Formation in southern Utah’s Grand Staircase-Escalante National Monument.

The new species is named Nasutoceratops titusi, where 'Nasutoceratops' means 'large-nosed Ceratopsid' and 'titusi' honours Alan Titus a palaeontologist at Grand Staircase-Escalante National Monument for his assistance in work at the site. The species is described from a specimen comprising a nearly complete 1.8 m skull plus three fragmentary dorsal vertebrae and parts of both forelimbs, plus a second specimen comprising a disarticulated skull and jaw elements, and an isolated squamosal bone from a third specimen. 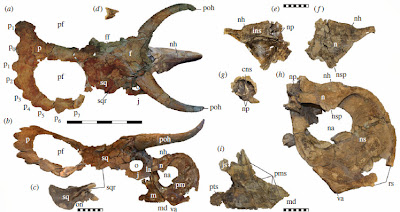 Nasutoceratops titusi is an unusual Ceratopsid; it has a shorter snout than any other known member of the group, but it's narial region (nose) is extremely inflated and dominates the face. The supraorbital horns (horns above the eyes) are elongated and twisted, and have grooves running along their entire length. The frill is large but not outstandingly so and not otherwise unusual. 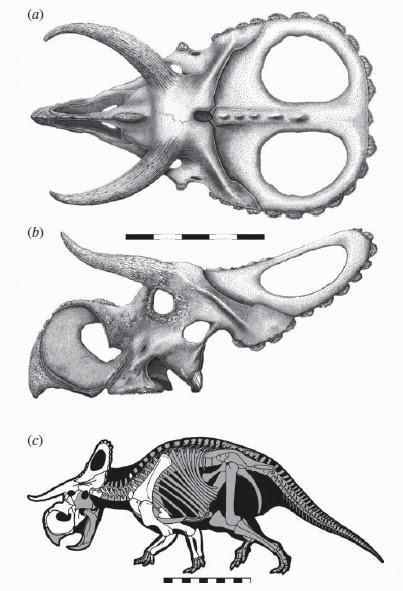 See also A new species of Ceratopsid Dinosaur from the Late Cretaceous of southern Alberta, Torosaurus and Triceratops; one dinosaur or two? New dinosaurs from old draws and Nesting behavior and parental care in an Ornithischian Dinosaur?