Magnitude 4.8 Earthquake in the Zagros Mountains of western Iran.

The United States Geological Survey recorded a Magnitude 4.8 Earthquake at a depth of 10 km in the Zagros Mountains of western Iran, slightly before 8.35 pm local time (slightly before 4.05 pm GMT) on Monday 16 September 2013. This is a moderately large quake, likely to have been felt locally, but there are no reports of any damage or injuries. 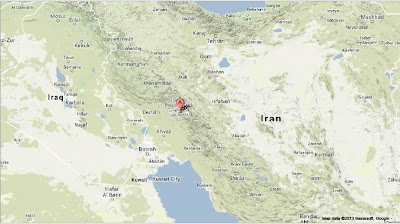 
The Zagros Mountains are the result of faulting and folding along the Zagros Thrust Belt, where the Arabian Plate to the southwest is being pushed into the Eurasian Plate to the northeast by the northward movement of the African Plate and rifting beneath the Red Sea. This thrusting and folding leads to uplift which is forming the mountains (mountain orogeny). It is not a smooth process, with rocks tending to remain stationary comparative to one-another until pressure builds up enough to overcome their inertia, causing Earthquakes in the process.

To the northeast of this the geology is dominated by three large tectonic blocks, the Central Iran, Lut and Helmand, which move separately in response to pressure from the south, stretching and compressing the rock layers close to the surface and creating frequent Earthquakes, some of which can be very large.