A Cnemidolestodean Insect from the Late Carboniferous of Ningxia Province, China.

The modern Insect Order Orthoptera (Grasshoppers, Crickets and Katydids etc.) appeared in the fossil record in the Late Carboniferous. It is placed by Palaeoentomologists in the Superorder Archaeorthoptera, which comprises both the Orthopterans and related groups known from the late Palaeozoic and Mesozoic, but which cannot be assigned to any modern Orthopteran Family, and which are not thought to have any modern descendants. The relationships between these extinct groups and modern Orthopterans is not entirely clear.

In a forthcoming paper in the journal Acta Palaeontologica Polonica available online from 7 January 2013, Jun-Jie Gu of the College of Biological Science and Engineering at the North University of Nationalities and the State Key Laboratory of Palaeobiology and Stratigraphy at the Nanjing Institute of
Geology and Palaeontology, Olivier Béthoux of the Muséum National d'Histoire Naturelle in Paris and Dong Ren of the Key Laboratory of Insect Evolution and Environmental Changes at Capital Normal University in Beijing, describe a new Insect species from the Late Carboniferous Xiaheyan Locality  in Ningxia Province, northern China, which is placed in the Order Cnemidolestodea, an order of Archaeorthopterans known only from the Palaeozoic.

The new species is named Xixia huban, where 'Xixia' is an ancient name for the area where the fossils were found and 'huban' is a chinese word for the stripes of a Tiger, a reference to the patterning on the forewings of the Insect. The species is described from a single specimen with both pairs of wings preserved in some detail but very little preservation of the body, plus eleven further specimens comprising individual wings or fragments thereof. 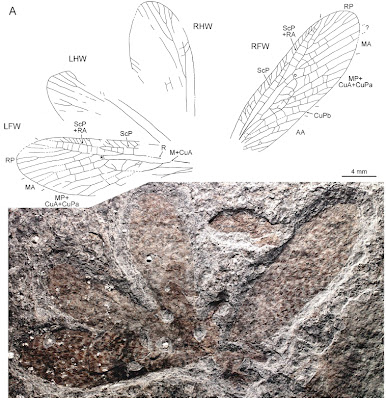