The United States Geological Survey recorded a Magnitude 5.0 Earthquake at a depth of 9.8 km, on the Eritrean coast 19 km to the north of the port of Massawa, slightly before 12.05 pm local time (slightly before 9.05 am GMT) on Wednesday 18 September 2013. There are no reports of any damage or injuries arising from this quake, but it was felt in both Massawa and Äsmara, 66 km to the southwest of the epicenter. 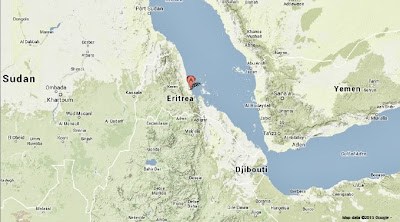 The approximate location of the 18 September 2013 Eritrean Earthquake. Google Maps.


Eritrea is located on the western shore of the Red Sea, which while referred to as a sea, is technically an immature ocean, underlain by the Red Sea Rift, a spreading boundary between two tectonic plates, the African Plate and the Arabian, where new oceanic crust is being formed. Arabia was formerly part of the African Plate, but split away about 30 million years ago. The Great Rift Valley of Africa is a continuation of this rift, that is slowly splitting Africa in two from the north to the south. This rifting exerts pressure on the rocks around the margin of the sea, slowly pushing them apart, not smoothly but in fits and starts as the pressure overcomes the tendency of the rocks to stick together.

See also Earthquakes beneath the Gulf of Aden, Earthquake beneath the Red Sea, The magma chamber beneath the Erta Ale Volcano, Eruption in the Zubair Archiapelago, in the southern Red Sea and Eruptions on Mount Nabro, Eritrea.