Magnitude 2.6 Earthquake near the Grand Canyon in Arizona.

The United States Geological Survey recorded a Magnitude 2.6 Earthquake at a depth of 4.9 km roughly 18 km to the north of the Grand Canyon in northeast Arizona, slightly after 6.35 pm local time on Sunday 22 September 2013 (slightly after 1.35 am on Monday 23 September GMT). A quake this size is unlikely to cause any damage or injuries, but is likely to be felt, and witnesses reported feeling this event in the town of Tusayan, roughly 28 km to the south of the epicenter of the event. 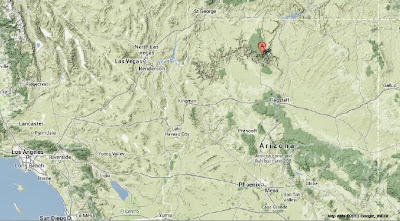 Northern Arizona forms part of the Colorado Plateau, a geological province uplifted during the Laramide Orogeny between 70 and 35 million years ago as part of the ancient Farallon Plate was subducted beneath North America. The Colorado Plateau is a fairly stable geological unit, despite having been uplifted and in places having had igneous material emplaced within it, however it is bisected by a number of north-south running thrust faults associated with the uplift and continued inter-plate movement and subduction along the American west coast. Movement on these faults seldom leads to major Earthquake events, but smaller tremors are not uncommon.