The United States Geological Survey recorded a Magnitude 4.2 Earthquake at a depth of 10.1 km beneath southern Chihuahua State, Mexico, roughly 115 km to the southeast of Chihuahua City, slightly after 1.40 am local time (slightly after 7.40 am GMT) on Friday 13 September 2013. There are no reports of any damage or casualties arising from this quake, although it is likely to have been felt locally. 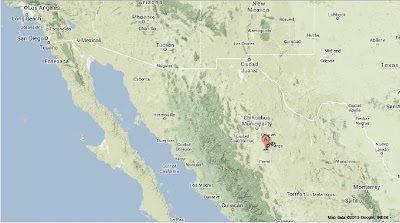 The approximate location of the 13 September 2013 Chihuahua Earthquake. Google Maps.