Environment America reports on fracking in the USA.

Fracking, or Hydraulic Fracturing, is a process by which water, sand and chemicals are forced into buried sediments in order to shock them into releasing trapped hydrocarbons, which can then be extracted for commercial use. This has proved highly controversial with environmentalists, who accuse the process of causing Earthquakes, polluting groundwater, and using large amounts of fresh water.

Environment America is a federation of state-based, citizen-funded environmental advocacy organizations, which both engages in grassroots activities such as letter writing campaigns and organizing public meetings and more academic projects such as commissioning research into environmental issues.

On Thursday 3 October 2013 the group published a report entitled Fracking by Numbers, which examines the environmental impact of the industry across the US, and makes a number of recommendations as to how both state and federal governments should regulate the industry. The report was authored by Elizabeth Ridlington of the Frontier Group (a US environmental thinktank) and John Rumpler of the Environment America Research & Policy Center.

Fracking is known to be taking place in 17 US states, with permits for over 800 000 wells having been granted since 2005 (how many of these have or will be developed is less clear). The industry is keen to expand into a number of other states. 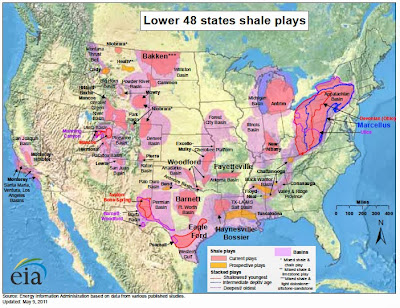 Plays (areas where hydrocarbons are thought or known to accumulate) currently being exploited by the hydraulic fracturing industry, and those currently being targeted for future exploitation. Riddlington & Rumpler (2013).

Hydraulic fracturing has been widely associated with the contamination of both ground and drinking water. This can occur in a number of ways, including the direct leaking or spillage of chemicals used in the fracking process, well blowouts (in which drilling operations encounter unexpected pockets of pressurized gas, typically resulting in an explosion at the wellhead), migration of methane or other material from the reserve to aquifers and long term migration of wastewater at or beneath the surface (water used in the fracking is not typically returnable to normal use, having been contaminated both by chemicals added to it during the fracking process and from within the well). 743 such incidents have been reported in New Mexico, 340 in Colorado and 161 in Pennsylvania.


The process of pumping used water into strata deep below the surface, typically beds from which liquids have previously been extracted is considered particularly hazardous, due to the potential failure of subsurface structures which can result in contaminated water migrating to aquifers unseen, and the risk of changing the pressure within, and therefore mechanical properties of, these beds, which has been linked to an upsurge in seismic activity in a number of places. A number of incidents of the failure of water storage plants at the surface are also sighted, as well as several of frackers deliberately (and illegally) discharging contaminated water into the environment. 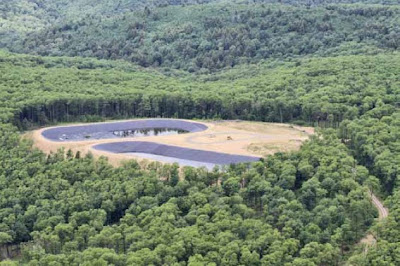 An open waste pit storing contaminated water from a hydraulic fracturing operation near Summit, Pennsylvania. The use of such pits is prohibited in most industries in the US, but fracking is currently exempt from such legislation. Riddlington & Rumpler (2013).


Fracking has also been linked to the creation of water shortages in a number of areas. The industry uses a large volumes of water and, as noted above,  this is seldom suitable for other purposes once it has been used. This creates a conflict of interest with other water users, which has left fames and communities without water in Texas and New Mexico. There have also been reports of frackers illegally draining water from natural sources which (in theory) were subject to legal protection.

The industry has also been widely associated with atmospheric pollution, both via the venting of gasses being extracted and fumes from chemicals used in the process. A number of volatile aromatic compounds have been recorded at or around sites where hydraulic fracturing occurs. Workers at sites have also been found to be found to be suffering from silicosis (miners lung), a disease in which silica particles (sand), which the body cannot expel, build up in the lungs, inhibiting breathing.

A number of health clinics in Pennsylvania have also reported patients showing signs of exposure to toxic substances, who refused to leave names and paid in cash. Public health officials suspect these may be employees in the hydraulic fracturing industry afraid to leave details in case it affects their jobs.

The industry is also associated with air pollution on a wider scale, including the production of large volumes of nitrogen oxides, which are a significant factor in smog formation, and significant emissions of greenhouse gasses. Natural gas (methane) has widely been promoted as a 'bridge fuel', something to use until better renewable sources become available which is less polluting than oil or coal. However methane is a powerful greenhouse, and studies have suggested that significant amounts of the gas extracted by hydraulic fracturing is lost to the atmosphere, one study in Utah indicating over 11% of the total gas was lost in this way, making the process considerably more polluting than coal, even before losses later in the supply chain, and the effects of carbon dioxide produced by burning the gas are taken into account. 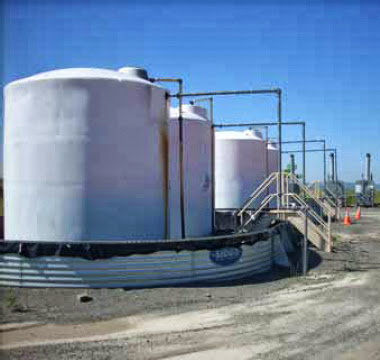 Methane storage tanks, which can be a source of leeks adding to the industries environmental footprint. Riddlington & Rumpler (2013).

Fracking also has a notable effect on the landscape, with the process requiring a large area be flattened and cleared of vegetation to permit access of drilling equipment, as well as an extensive network of supporting roads etc., often in areas that have either been agricultural or completely unused by humans. This has obvious aesthetic implications, but also creates severe problems for wildlife, leading habitat fragmentation and reducing the area available to bird and mammal species that need large territories for successful reproduction. Companies are known to be seeking to expand their activities into a number of US National Parks, as well as other significant and iconic wilderness areas. 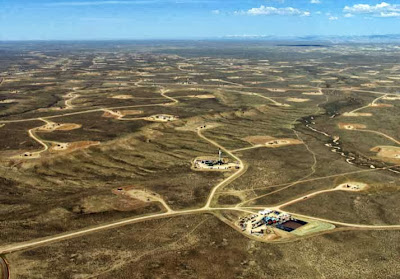 Wells and roads on the Jonah Gas Field in Wyoming. Riddlington & Rumpler (2013).

The industry also places considerable costs on local communities, which may not receive any benefits in return. The industry uses large vehicles, that will have a heavy impact on local roads that may not have been built to handle such traffic, and in many areas the arrival of the industry has been linked to a dramatic upsurge in traffic accidents. The arrival of large numbers of temporary workers in an area can place considerable strain on areas such as housing, often requiring increased investment to support the needs of local populations. There is also a danger of the industry leaving post-extraction environmental costs to local communities; this is in theory illegal, but in practice the companies involved can be liquidated in a number of ways, leaving shareholders with profits and local agencies with the cleanup bill.

The report makes a number of recommendations for both state and federal governments.

At state level the report recommends that state governments ban the process, or where it is already in use impose an immediate moratorium. Where states are not willing to do this they should allow cities, towns and counties to do so. States should also specifically ban the disposal of waste from the industry within their borders, to avoid becoming dumping grounds for waste created elsewhere.

At federal level it recommends the closing of a number of loopholes in environmental legislation that exempt the industry from regulations that other industries are bound by, particularly those relating to the disposal of hazardous waste, the protection of water supplies, the protection of national parks and other wilderness areas and the storage of wastewater in open pits. It also recommends that tighter financial assurance regulations be put in place, to prevent companies leaving cleanup costs to local communities.

See also Secret fracking off the coast of California, The British Geological Survey reports on Shale Gasses in the Bowland-Hodder Unit, Geological Society of London to host a public meeting on Shale Gas extraction, Report recommends Fracking should be allowed to continue in the UK and Fracking linked to earthquakes in Lancashire, northeast England.