The movement of deep magma beneath the Afar Depression.

The Afar Depression lies at at northernmost end of Africa's Great Rift Valley, where it meets the sea at the junction between the Red Sea and the Gulf of Aden. All three of these features are areas of rifting, with Africa slowly being split into two new continental plates (the Somali and Nubian) along the Great Rift Valley, and new ocean crust being formed on rifts beneath the Red Sea and Gulf of Aden. The Afar Depression is an area of noted volcanism, and it has long been assumed that it sits on top of magma plume originating from deep within the Earth's mantle. 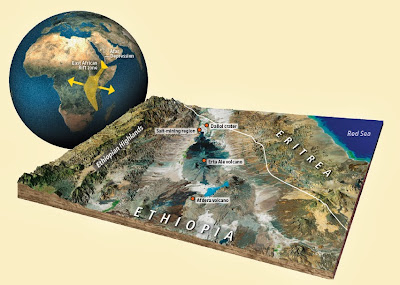 The Afar Depression at the northern end of the Great Rift Valley. Scientific American.

In a paper published in the journal Geology on 18 April 2013, a team of scientists led by James Hammond of the Department of Earth Science and Engineering at Imperial College London and the School of Earth Sciences at the University of Bristol discuss the result of a study of the deep geology beneath the Afar Depression using seismic stations across Ethiopia, Eritrea, Djibouti, Yemen, and Kenya, which was used to build a model of the movements going on beneath the area. 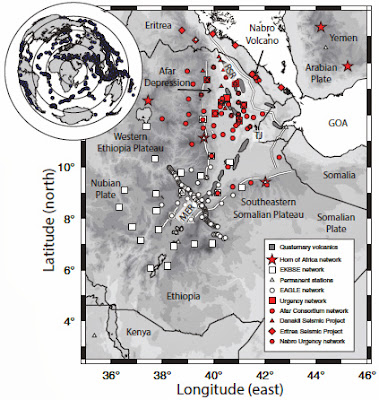 Hammond et al. could find no evidence for the presence of an active volcanic plume beneath the Afar Depression. Rather the volcanoes of the area appeared to be fed by the passive movement of magma drawn from the south (i.e. beneath the Great African Rift) by expansion beneath the depression, which appeared to be driven by the three surrounding areas of rifting, rather than being a driving force of them. They did, however, also conclude that hotspot magmatism was likely to have occurred in the area in the past, as the current passive drawing of magma into the area could not account for the flood basalts of the Ethiopian Plateau. 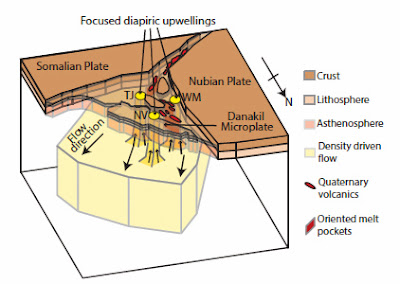