Tooth microwear in a Silesaurid Archosaur.

The Silesaurids are considered to be the sister group to the Dinosaurs; that is to say they are the group of animals considered to be the closest relatives of the Dinosaurs, without actually being classed as Dinosaurs. They are known only from the Middle to Late Triassic, about 245 to 203 million years ago. It is generally thought that understanding the Silesaurids can help to understand the origin of the Dinosaurs, however the two groups differed in several important ways, one of which is that, while the earliest Dinosaurs are thought to have been small carnivorous species, the Silesaurids are generally held to have been herbivorous.

In a forthcoming paper in the journal Acta Palaeontologica Polonica, Tai Kubo of the Fukui Prefectural Dinosaur Museum and Mugino Kubo of The University Museum at The University of Tokyo discuss the results of a study into microwear on the teeth of the Late Triassic Silesaurid Silesaurus opolensis, and the implications of these results.

Kubo & Kubo found microwear on the teeth consistent with that seen in modern Mammals with a browsing diet. This implies a diet of leaves, twigs, fruits and other material from higher woody shrubs, as opposed to a grazing diet, eating grass and herbs close to the ground, though limited omnivorey cannot be ruled out by this method of analysis. Microwear on the teeth of modern herbivorous Mammals is mostly associated with a diet of grasses, which produce silica phytoliths to reduce grazing. Grasses had not evolved in the Triassic, but Horsetails were abundant, and these also produce silica phytoliths. 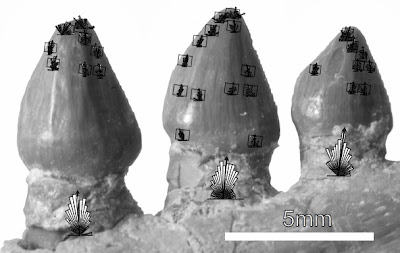 Non-facet microwear of teeth from the left lower jaw. Mesial (left), middle and distal (right) teeth have 8, 13, and 8 SEM sites, respectively, shown as open rectangles in the figure, in which scratch angles were measured. The rose diagram located in the middle of each SEM site represents scratch orientations in the site. The black arrow represents a mean vector orientation of each rose diagram. The rose diagram at the base of each tooth represents the scratch orientation of the whole tooth. We could not lay each SEM site horizontal for observation to eliminate effects of mold curvature. Nevertheless, it is clear that scratches are basically oriented in the apico-basal direction for all teeth. Kubo & Kubo (2012).