A new species of Horseshoe Crab from the Late Jurassic Owadów-Brzezinki Lagerstätte of Central Poland.

Horseshoe Crabs, Xiphosurida, first appeared in the fossil record during the Ordovician, at least 480 million years ago, and are still found today in Southeast Asia and along the east coast of North America. They are not true Crabs, nor even Crustaceans, but a distinct group of Arthropods related to the extinct Trilobites and terrestrial Arachnids (Spiders, Scorpions and Mites etc.). The group are remarkably morphologically conservative, having changed very little since they first appeared, and even less since the early Mesozoic, when forms very similar to those alive today first appeared.

In a paper published in the journal PLoS One on 2 October 2014, AdrianKin of the Society of Friends of Earth Sciences in Warsaw and Błażej Błażejowski of the Institute of Paleobiology at the Polish Academy of Sciences, describe a new species of Horseshoe Crab from the Late Jurassic Kcynia Formation at the Owadów-Brzezinki Quarry in Central Poland.

The new species is placed in the extant genus Limulus and given the specific name darwini, in honour of the Victorian naturalist and evolutionary biologist Charles Darwin (1809-1882). The species is described from nine specimens, although these all preserve only the dorsal surface, and are thought to be moulted exoskeletons of juveniles. Kin and Błażejowski note that such moulted exoskeletons are the most common form of Xiphosurid fossils encountered, and that most are from juveniles rather than adult specimens; the Crabs keep growing for their entire lives, but have a distinct juvenile phase when they grow rapidly and moult several times a year, followed by an adult phase when they grow much more slowly and typically moult only once per year. 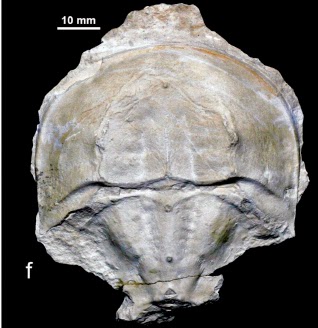 Although only the dorsal surface of Limulus darwini is preserved, this is remarkably similar to the modern Limulus polyphemus from the east coast of North America, to a degree that Kin and Błażejowski feel merits explanation. 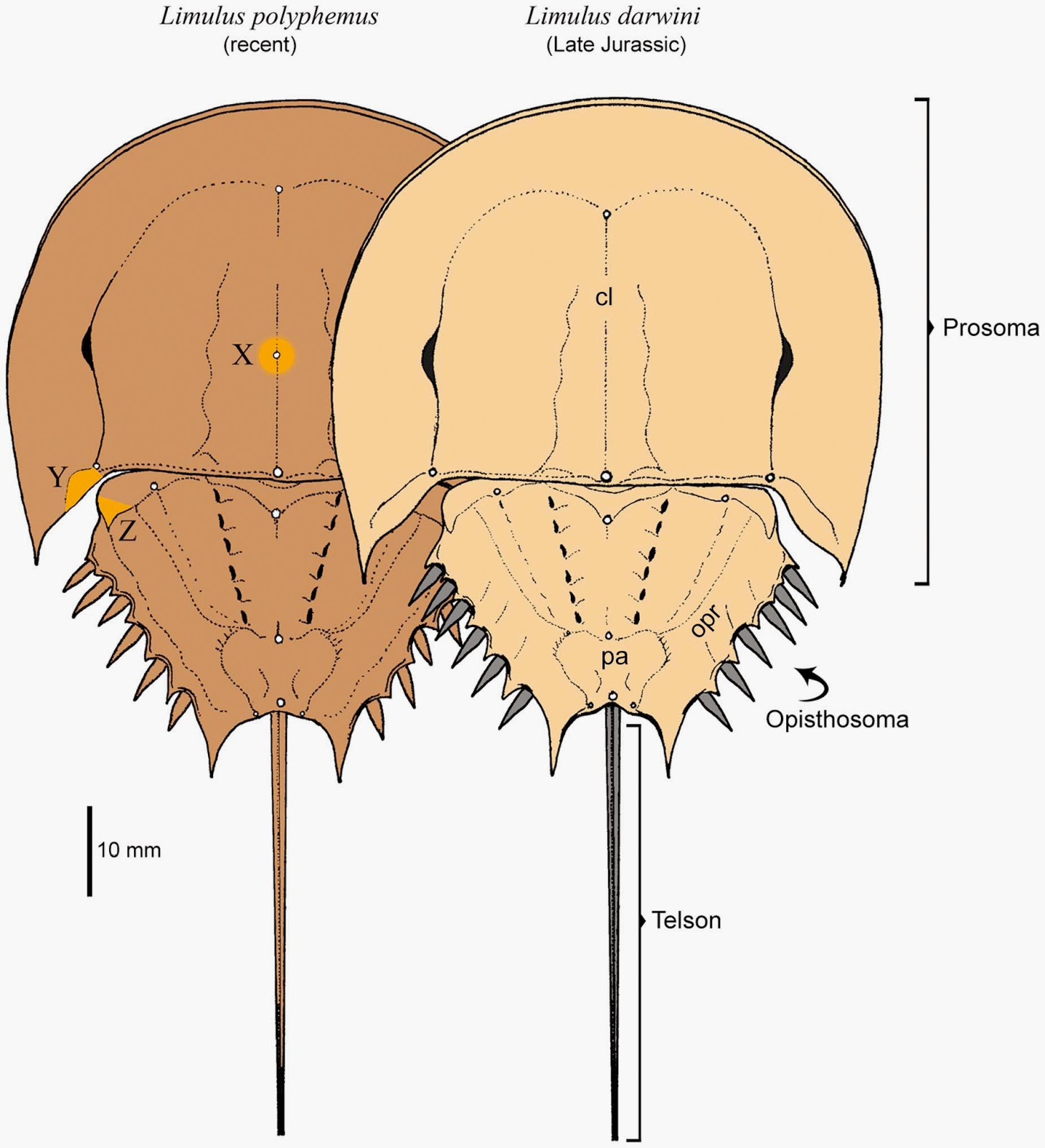 Kin and Błażejowski note that while Horseshoe Crabs show remarkable morphological conservatism, they are in many ways strikingly flexible organisms. All four modern species are highly tolerant of wide fluctuations in temperature and salinity; the North American Limulus polyphemus lives happily in waters as cool as 1˚C off the coast of Maine and as warm as 30˚C off the coasts of Florida and Mexico, while the Asian Carcinoscorpius rotundicaudata migrates around 150 km up the Hooghly River from fully marine to fully freshwater conditions.

Horseshoe Crabs are also remarkably broad in their dietary habits. Most species prey predominantly on Bivalves, but also eat a variety of Worms and Snails, and will feed on a wide range of invertebrates, such as Echinoderms and Crustaceans, when they are available, and will even consume small Fish and plant material.

The precise ecology of extinct organisms is always subject to debate, but the fossils of the Owadów-Brzezinki Quarry are dominated by Bivalves of the genus Corbulomima, which is also believed to have been tolerant of wide fluctuations in salinity (many of its closest living relatives exhibit this trait) and which also produces fossils of fully marine species such as Ammonites, and a variety of terrestrial fossils, such as Grasshoppers and Beetles, suggesting at least periodic inundations with freshwater

Horseshoe Crabs are also known from the Solnhofen Limestone in Germany, deposits roughly contemporaneous with those at Owadów-Brzezinki, where the exceptionally high preservation of the fossils has been linked to high salinity in lagoons, which excluded detritavores that might have preyed on the dead animals.

This suggests that two of the survival traits seen in modern Horseshoe Crabs, a tolerance of changing water salinity and a diet based upon (usually widely available) Bivalves but combined with a willingness to switch to other prey, were already seen in the group in the Jurassic.

Kin and Błażejowski also note that while Horseshoe Crabs show unusually little morphological variation, they show typical levels of genetic variation for more variable species, suggesting that individual Crabs vary in their environmental tolerances; this can be an advantage in times of environmental crises, as it makes it more likely that some members of a group will always survive.

Finally Kin and Błażejowski observe that the blood of Horseshoe Crabs is known to have remarkable anti-bacterial properties, a trait shared with other groups that have changed relatively little for very periods of time, such as Sharks and Crocodiles.

Horseshoe Crabs are members of a diverse group or organisms known popularly as ‘living fossils’, which also includes groups such as Lingulid Brachiopods and Ginko Trees. However Kin and Błażejowski feel that this term is somewhat imprecise, as it also includes relict members of ancient groups such as the Ceolocanth Latimaria and the Nautilid Nautilus, which are not particularly similar to earlier members of the same groups. Instead they propose the adoption of a new term ‘stabilomorphism’, to describe species that have remained essentially similar in form for periods in excess of 65 million years (a definition which would also include fossil groups that remained stable for long periods of time but which have no living representatives) 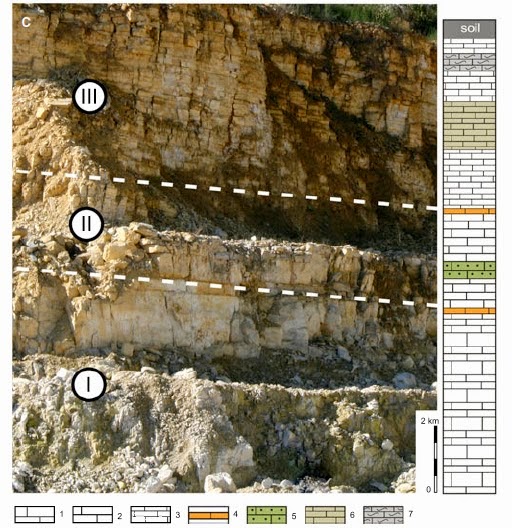 A Late Jurassic lagerstätte from central Poland
The term lagerstätte is used by Palaeontologists to describe a particularly rich fossil source; a site where fossils are either exceptionally numerous or exceptionally well preserved (or, ideally, both). One of the best known of these is the Solnhofen Limestone, or Solnhofen Plattenkalk, which formed in the early Tithonian,  towards the end of the Jurassic, as a result of intense global...

A Mygalomorph Spider from the Late Triassic of Italy.
Mygalomorph Spiders (Tarantulas and related species) are considered to be one of the most ancient groups of Spiders. They have two pairs of book lungs (many other Spiders have lost a pair) and downward pointing, rather than opposable fangs, again considered to be a primitive state in Spiders. Many species of Mygalomorph attain large sizes, all have flattened, disk-shaped bodies (rather than the more globular bodies of most other Spiders), and most are ambush predators.

Preserved Trilobite digestive tracts from the Middle Cambrian of Utah.
Trilobites were a group of Arthropods that flourished throughout the Palaeozoic, but died out at the end of the Permian. They are abundant and well studied fossils, but little is known of their internal anatomies.