The role of aquatic polymers in transmitting disease in coastal ecosystems.

Toxoplasma gondii is a protozoan parasite that affects humans, and many other animals, across the globe. While it causes disease in many organisms, it reproduces only in Felids, particularly in Domestic Cats, with oocysts (egg-like cysts) being shed in Cat faeces spreading the disease to many other organisms (some of which are subsequently eaten by Cats). The response to infection is variable; in humans it can cause illness and even death, but many people appear to become infected without ever suffering symptoms.

The disease has been recorded in a variety of Marine Mammals off the coast of California, including Sea Otters, which appear to be particularly vulnerable, and there have been a number of cases of Humans becoming infected after consuming seafood or simply coming into contact with seawater in California. While it is possible for Toxoplasma gondii oocysts to reach the sea in runoff from land, the rate of infection seen in Californian Marine Mammals is hard to explain; oocysts can persist in the environment for years, but should still be at a far lower concentration in the sea than can explain the infection rates seen.

In a paper published in the Proceedings of the Royal Society SeriesB: Biological Sciences on 8 October 2014, a team of oceanographers, ecologists and epidemiologists from the University of California, Davis and University ofCalifornia, Santa Cruz, led by Karen Shapiro of the One Health Institute and Department of Pathology, Microbiology and Immunology at the School ofVeterinary Medicine at the University of California, Davis, describe the results of a series of investigations into the role of marine polymers in the transmission of Toxoplasma gondii in Californian coastal ecosystems.

Marine polymers are a diverse group of sticky organic chemicals produced by organisms for a variety of reasons, including defence (many organisms have a protective mucous coating), feeding (filter feeding and detritus consuming organisms often use mucus to aggregate small food particles into manageable clumps) and movement (such as the mucus trails left by Snails). They form drifting marine aggregates (marine snow), which tend to sweep up small particles in the water, aiding the settling of such particles onto the seafloor or other surfaces.

Firstly Shapiro et al. tested to concentration of Toxoplasma gondii oocysts in seawater with varying concentrations ofmarine polymers, finding that high concentrations of such polymers could raise the concentration of oocysts by up to 80%. This indicates that oocysts entering the marine ecosystem are highly likely to become associated with marine polymer aggregations, concentrating the infective particles, if causing them to settle out more rapidly (which is not a bad thing for the oocyst, settling close to shore where it may be consumed by a potential host is better than drifting into the open ocean where it will eventually die). 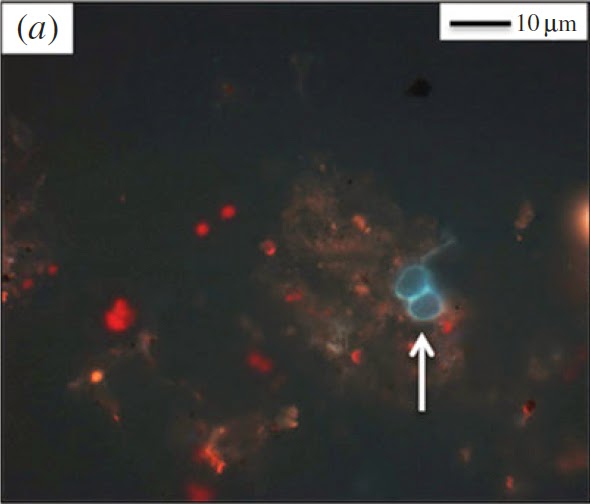 Next Shapiro et al. looked at the ability of the Turban Snails Chlorostoma brunnea, Chlorostoma montereyi and Promartynia pulligo to absorb and transmit Toxoplasma gondii oocysts; it has previously been observed that Sea Otters that favour Turban Snails are more at risk of Toxoplasma gondii infection than those living in the same areas that favour other prey. The Turban Snails live on Kelp plants, where they consume mucus from the surface of the Kelp; the mucus is excreted by the Kelp as a defence, allowing the transmission of dissolved marine nutrients but excluding potentially harmful microorganisms. Shapiro et al. found that Turban Snails start to excrete Toxoplasma gondii oocysts in their faeces about 10 days after being exposed to a source of food contaminated with the oocysts, and that these oocysts are significantly concentrated in the faeces relative to the food. 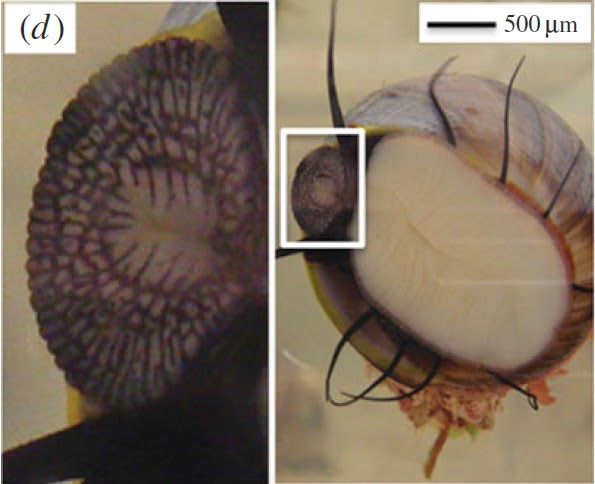 Based upon these experiments Shapiro et al. propose the following mechanism for the transmission of Toxoplasma gondii in Californian coastal waters: The oocysts of the organism enter the water through runoff from the land at low concentrations, but are concentrated in floating aggregations of marine polymers. These aggregations may be consumed in the water column by filter feeding Fish such as Sardines, or settle out of the water column and be consumed by filter feeding shellfish such as Clams, both of which facilitate transmission to Humans via seafood.

In the specific case of Otters the chance of infection is significantly raised by the consumption of Turban Snails, which feed upon mucus on the surface of Kelp Plants (where the oocysts are likely to have become concentrated) and further concentrate the oocysts within their bodies. 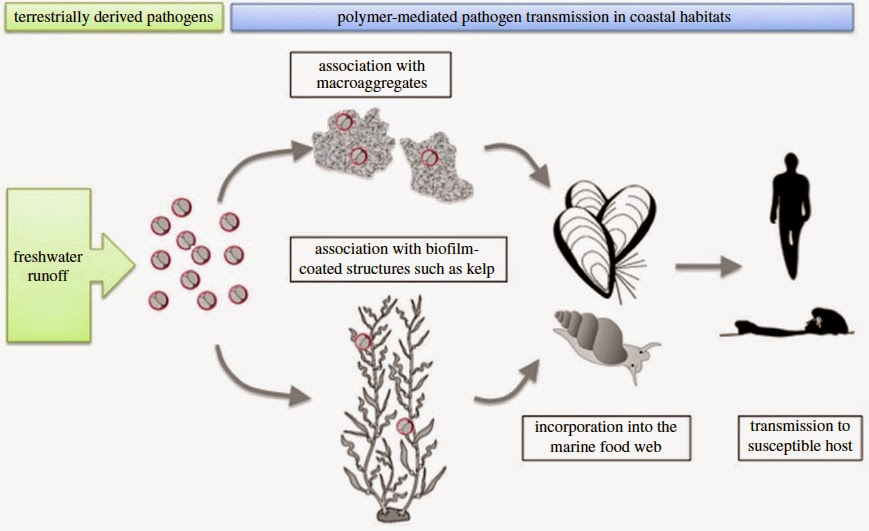 Two mechanisms are proposed whereby polymers can mediate transmission of terrestrial pathogens in coastal ecosystems (depicted here for a modelzoonotic protozoan parasite, Toxoplasma gondii). Pelagic polymers such as TEPs may enhance the association of pathogens with sinking macroaggregates, while benthic exopolymer substances (EPS) can trap pathogens within sticky biofilms. Both mechanisms are likely to increase the probability ofpathogen entry into the marine food web through aggregate-consuming invertebrates such as Bivalves or surface scraping Molluscs such as Snails. Ingestion ofcontaminated prey items can then lead to pathogen exposure in susceptible hosts, including threatened California Sea Otters and Humans. Shapiro et al. (2014).

At least 467 dead in West African Ebola outbreak.
At least 467 people have died in an outbreak of  Ebola Hemorrhagic Fever in West Africa that began in February this year. The disease initially appeared in the remote border area between Guinea, Sierra Leone and...

A Phytomyxean parasite forming galls on Bull Kelp on the coast of Chile.
Bull Kelp, Durvillaea antarctica, is a large Brown Algae forming dense colonies of fronds up to 8 m long on otherwise exposed rocky shores on the coasts of South America, New Zealand and the islands of the...

John Snow's Cholera Map.
John Snow was a nineteenth century London doctor, who is widely credited with the discovery of the transmission mechanism of Cholera, a severe and often fatal infection of the small intestine caused by the bacterium Vibrio cholerae. In Snow's time our understanding of microbiology was in its infancy...