A giant agglutinated Foraminiferan from the Western Mediterranean.

Foraminiferans are Amoeba-like single-celled organisms found either free-floating or attached to surfaces in marine ecosystems. Many build ornate tests (shells) from calcium carbonate, and planktonic forms are widely used in biostratigraphy (the use of small fossils to date sedimentary rocks), but others lack the ability to produce their own biominerals, and instead construct protective coverings by cementing together other items.

In a paper published in the journal Zootaxa on 10 June 2013, a team of scientists led by Manuel Maldonado of the Centro de Estudios Avanzados deBlanes describe a new species of agglutinated Foraminiferan from the Seco de Palos seamount in the Western Mediterranean.

The new species is placed in the genus Spiculosiphon, and given the specific name oceana, in honour of the non-profit organization for ocean conservation OCEANA, which was responsible for the collection of the samples from which the species is described. Spiculosiphonoceana lives attached to a substrate by a long stalk, both the stalk and the main body being covered by agglutinated Sponge spicules, though these are arranged laterally in a slight spiral around the stalk but radiate out from the body. 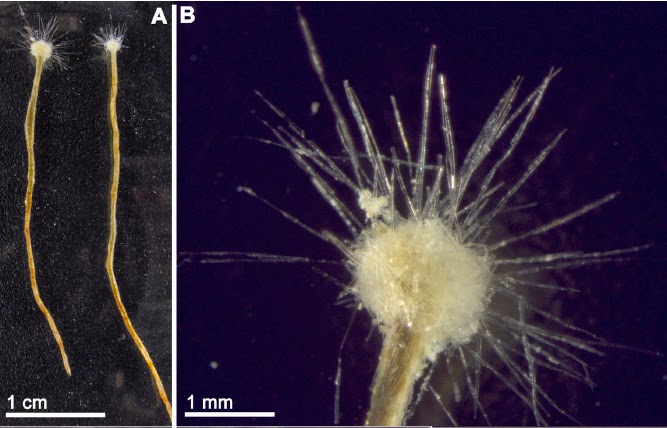 (A) General view of the Spiculosiphon oceana. (B) Detail of capitate region of the holotype, showing the globelike, central structure and the radiating tracts of spicules. Maldonado et al. (2013).

Maldonado et al. note that both species of Spiculosiphon show remarkable convergent evolution with some small species of Carnivorous Sponge, using scavenged Sponge spicules to build a body very similar in form to the Sponge; both organisms then trapping relatively large prey and dissolving it externally. 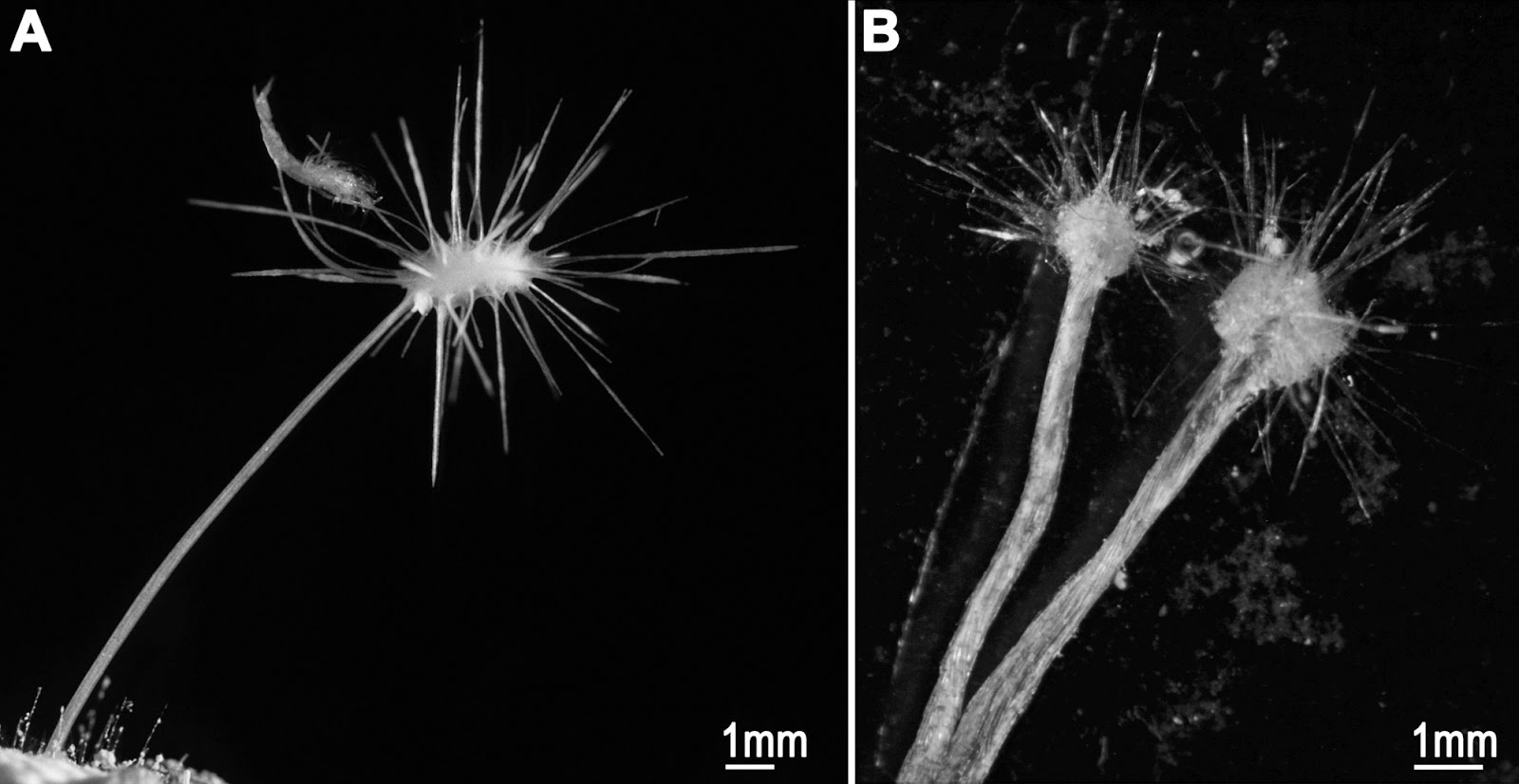 (A) View of the carnivorous sponge Asbestopluma hypogea soon after trapping a small Copepod. The sponge isdisplaying the spiny-headed morphology, which is typical after a period of starvation in order to maximize the chances of new prey capture. (B) View of the capitate region of Spiculosiphon oceana for a comparison with the body shape of the Carnivorous Sponge. Maldonado et al. (2013).

That said, they also acknowledge that while Sponge spicules and Diatom tests are generally considered to be chemically identical, Sponge spicules do persist for much longer in seawater without dissolving (which clearly has advantages when using recycled material as a construction material), leading Maldonado et al. to suggest their may be different trace elements or compounds in the two materials, which both contributes to the more durable nature of the Sponge spicules and is detectable to the Foraminiferans. 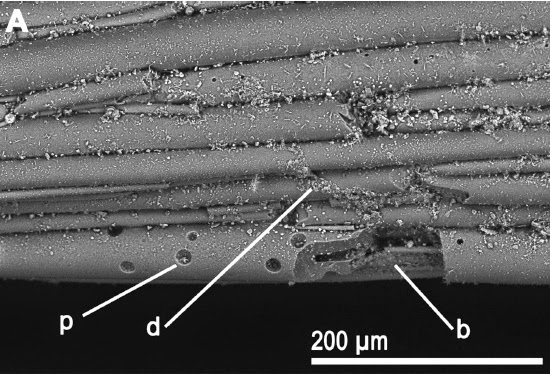 SEM micrograph of stalk. (Tightly packed needle-like spicule fragments, with no obvious cement betweenthem. Some debris (d) has flocculated on the spicules. Note that the silica of some of the oldest spicules started dissolving, asindicated by the occurrence of tiny cavities and pits (p) at their surface. Dissolution cavities are to be distinguished fromaccidental breakages (b) caused to the stalk during collection or laboratory manipulation. Maldonado et al. (2013).

Maldonado et al. also record patches of colour on the stalk of Spiculosiphon oceana which appear to derive neither from the mineralogy of the spicules nor any fouling organism living external to the stalk. Instead they suggest this may be caused by photosynthetic symbionts growing inside the stalk (beneath the translucent spicules). Other species of Agglutinated Foraminiferans have been recorded to host a variety of Dinoflagellates, Diatoms, unicellular Chlorophytes (Green Algae), unicellular Rhodophytes  (Red Algae) and Cyanobacteria; the colour of the markings on the Spiculosiphon oceana stalks tending to suggest Dinoflagellates, Rhodophytes, or Cyanobacteria might be present, though they were unable to confirm this. 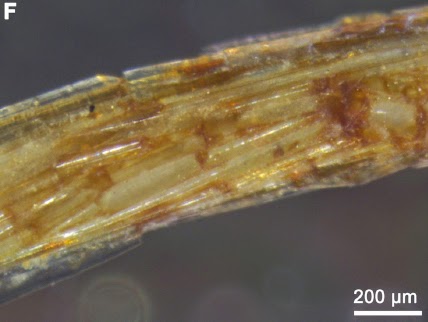 The stalk in showing a region in which the translucent spicule wall gets a brownish to purplish coloration. Maldonado et al. (2013).

Finally Maldonado et al. report the presence of a Calcareous Foramiferan test attached to the stem of one of the specimens (presumably the remains of a past meal) and not that both this test and the adjacent area of the stem show raised levels of the element tellurium. This is a very rare element, and has never been reported in any Foraminiferan before (nor many other organisms). It is unclear whether the source of this tellurium is the Calcareous or the Agglutinated Foraminiferan, nor exactly what biological process it could have been used in. 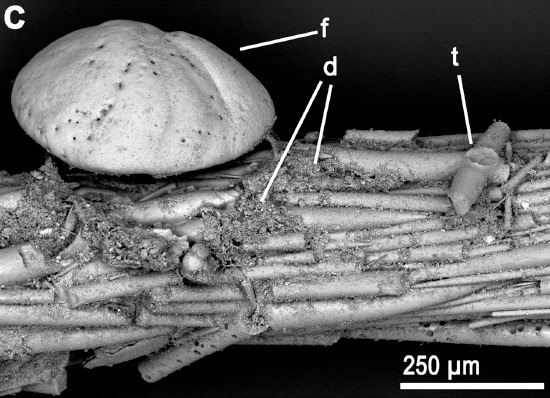 (C) Detail of a calcareous foraminifer (f) externally attached to the wall of one ofthe collected stalks. Note that a triaene (t) has been incorporated into the test and that some debris (d) hasflocculated on the stalk. Maldonado et al. (2013). 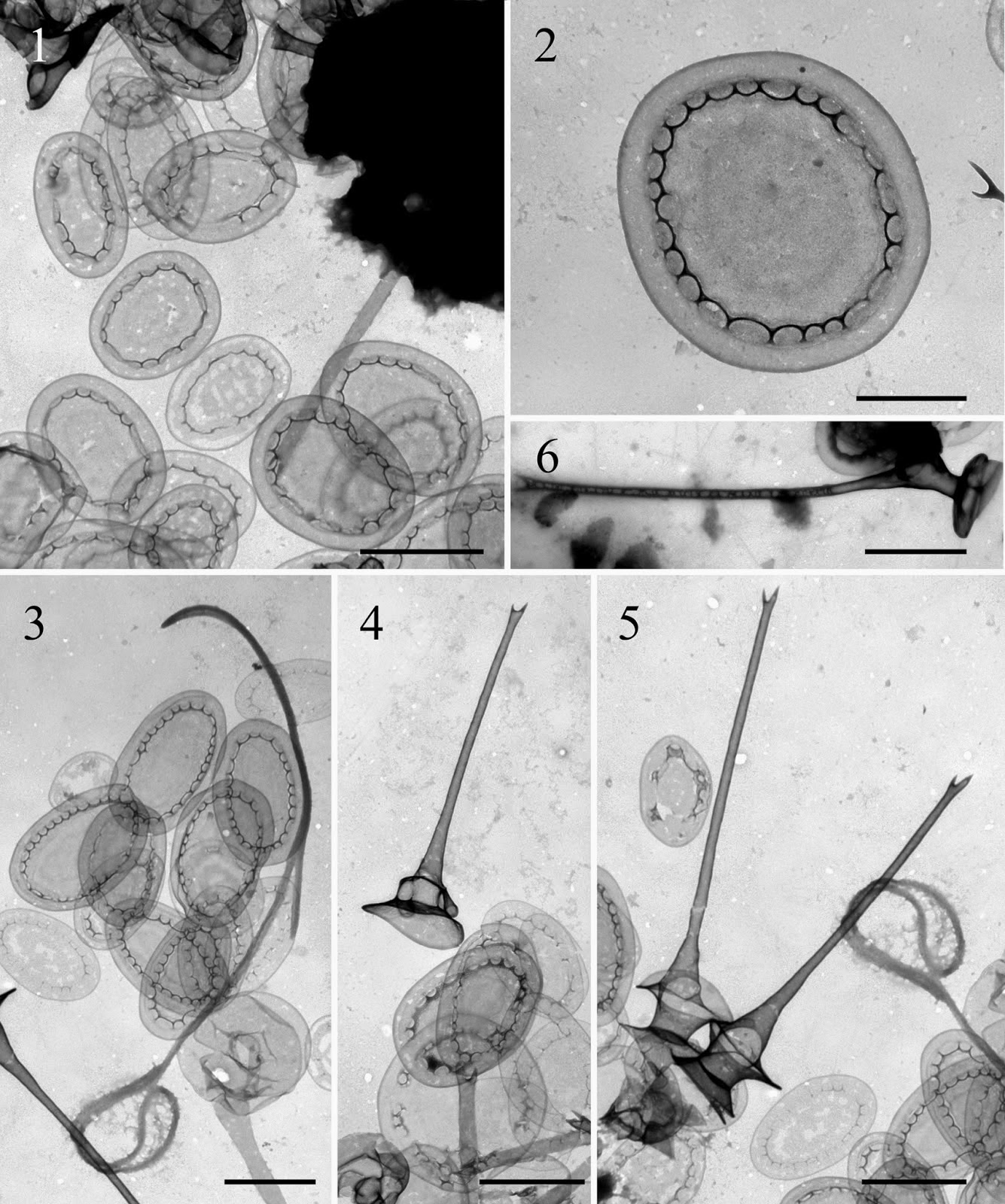 A new species of Golden Algae from central Finland.
Golden Algae (Chrysophyceae) are photosynthetic eukaryotic microbes (i.e. single celled organisms that posses cell nuclei similar to those found in the cells of animals and plants, but unlike bacteria which do not), found throughout the world, predominantly in fresh water. The group is mostly poorly studied, with the exception of a few species which are toxic to Fish. 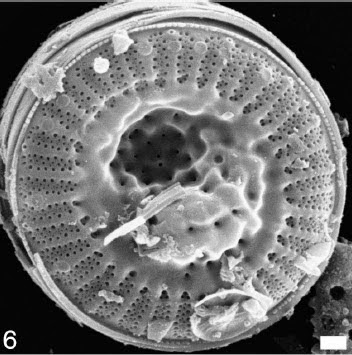 Four new species of fossil Diatom from the western United States.                                              Diatoms are single celled algae related to Kelp and Water Moulds. They are encased in silica shells with two valves. During reproduction the cells divide in two, each of which retains one valve of the shell, growing a new opposing valve, which is slightly smaller and fits flush within the older valve. This means that the Diatoms grow smaller with each new generation, until they...