Human remains from the Middle Pleistocene of Normandy.

Early and Middle Pleistocene Human remains are extremely rare in northern Europe, having to date been found only at a single location (Biache-Saint-Vaast) in France, as well as three locations in the UK (Swanscombe, Boxgrove and Pontnewydd) and seven sights in Germany (Sarstedt, Bilzingsleben, Weimar-Ehringsdorf, Maur, Reilingen, Steinheim and Bad Cannstatt).

In a paper published in the journal PLoS One on 8 October 2014, a team of scientists led by Jean-Philippe Faivre of the Unité Mixte de Recherchede la Préhistoireàl’Actuel: Culture, Environnement et Anthropologie at the Université de Bordeaux describe the discovery of Middle Pleistocene Human remains from an additional site in northern France, Tourville-la-Rivière in Normandy, for the first time. 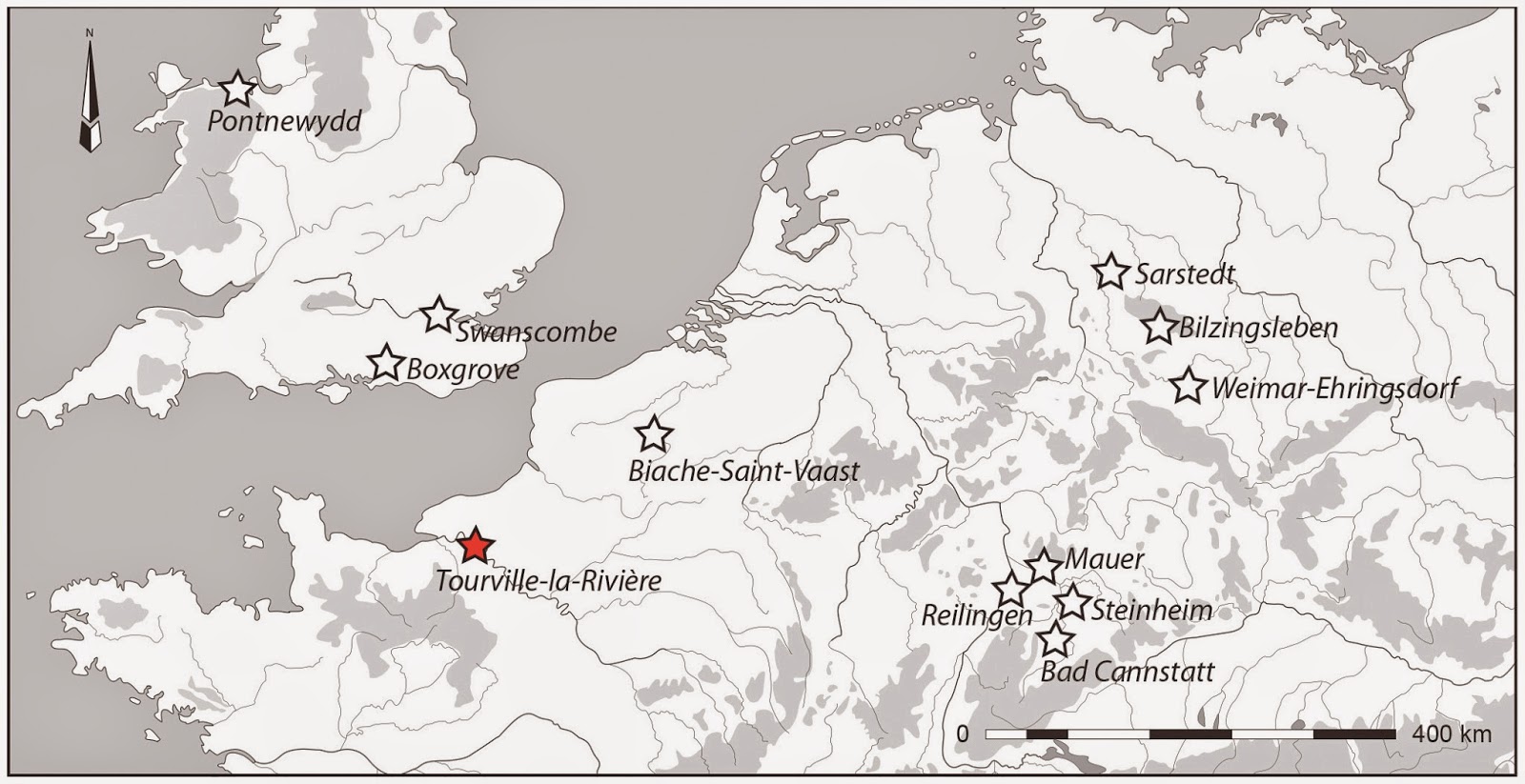 Location of the open-area site of Tourville-la-Rivière and other Northwest European (north to 45˚N and west to 16˚E) contexts, contemporaries of Early and Middle Pleistocene, that have yielded Human remains. Faivre et al. (2014).

The Tourville-la-Rivière site is a gravel quarry in the Seine Valley that has produced traces of Human activity since 1967, but has not previously produced any actual Human remains. Previous finds have included 726 stone tools as well as a wide variety of animal remains, some of which show signs of processing by Humans. The stone tools include numerous Levallois blades but no Levallois cores (rocks from which the blades would have been split off), which has led to the suggestion that the blades were being imported to the site (this is significant as it is thought that the first stone tool users made the tools they needed at the site they used them, then discarded them when they were finished, as is seen to some extent in Chimpanzees; the retaining of tools for later use being a development indicative of more advanced forward planning). Non-Lavallois blades and some non-Lacallois cores have also been discovered at the site, as well as some Rocourt-type tools (which are formed in a slightly different way, producing longer blades). The site has been dated to between 183 000 and 226 000 years old. 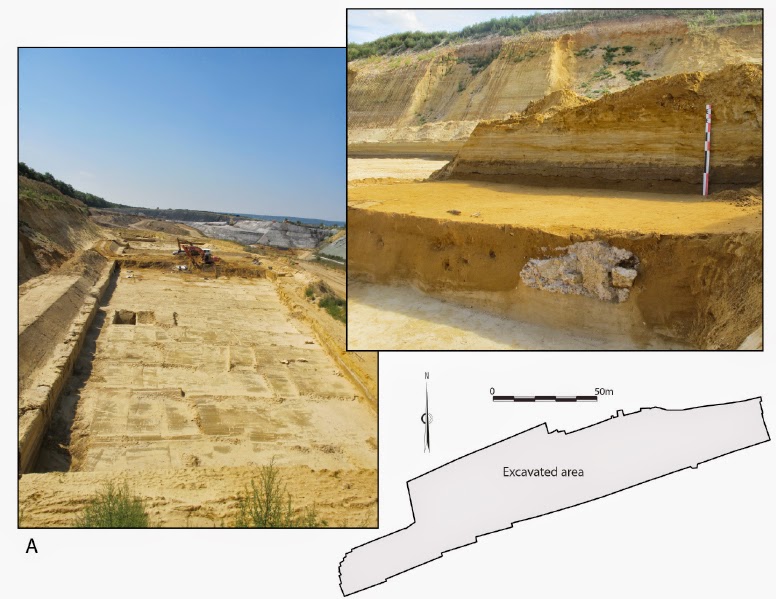 The Tourville-la-Rivièresite: General view of the site during excavation. Faivre et al. (2014).

Human remains were discovered at the Tourville-la-Rivière site by Antoine Cottard of the Institut national de recherches archéologiques préventives at the Centre archéologique de Grand Quevilly and Aminte Thomann. The material comprises the left humerus, radius and ulna (arm bones) all being blackened and eroded. The black colouration is probably indicative of having decomposed in standing water. 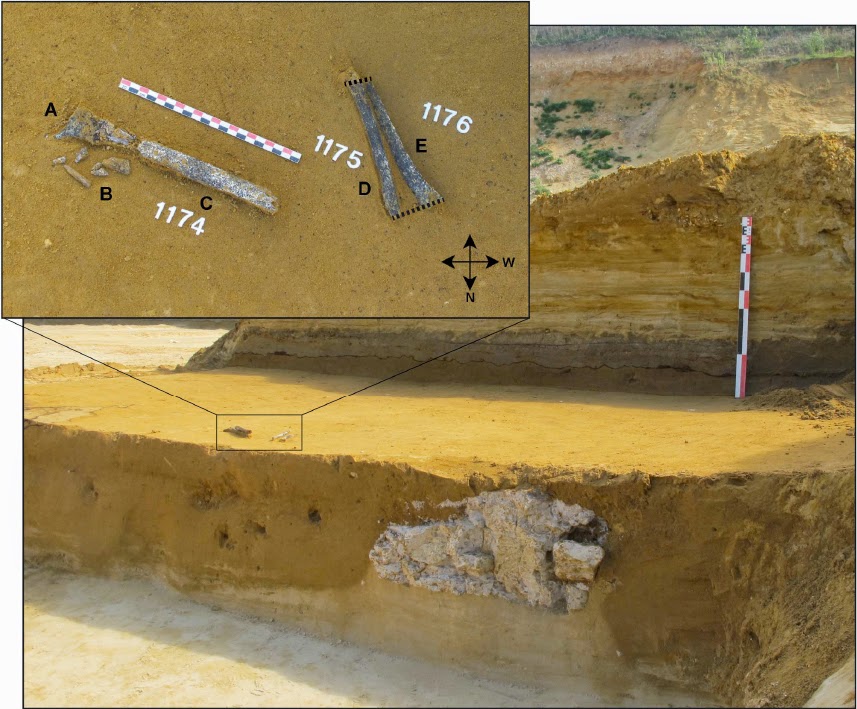 The precise taxonomy of Early and Middle Pleistocene Humans from Europe is debatable, with experts holding differing opinions as to whether Neanderthals should be seen as a different species or just a distinct population of early modern Humans. Whatever their relationship to modern Humans, the group do present a distinctive set of morphological traits which enable their identification as a distinct subset of human remains, presumably with a shared ancestry. Identification of Neanderthals usually depends on examination of the skulls and teeth of specimens, which are not present in the Tourville-la-Rivière material; identification of bones from other parts of the body is harder, as there is considerable overlap between morphologies found in Neanderthals, Modern Humans and other Early Modern Human populations. Nevertheless on this occasion Faivre et al. feel confident in assigning these bones to the Neanderthal group, as their morphology falls within a range seen in 70.5% of Neanderthal specimens, but only 8.8% of other Early Modern Humans and 2.8% of Modern Humans. 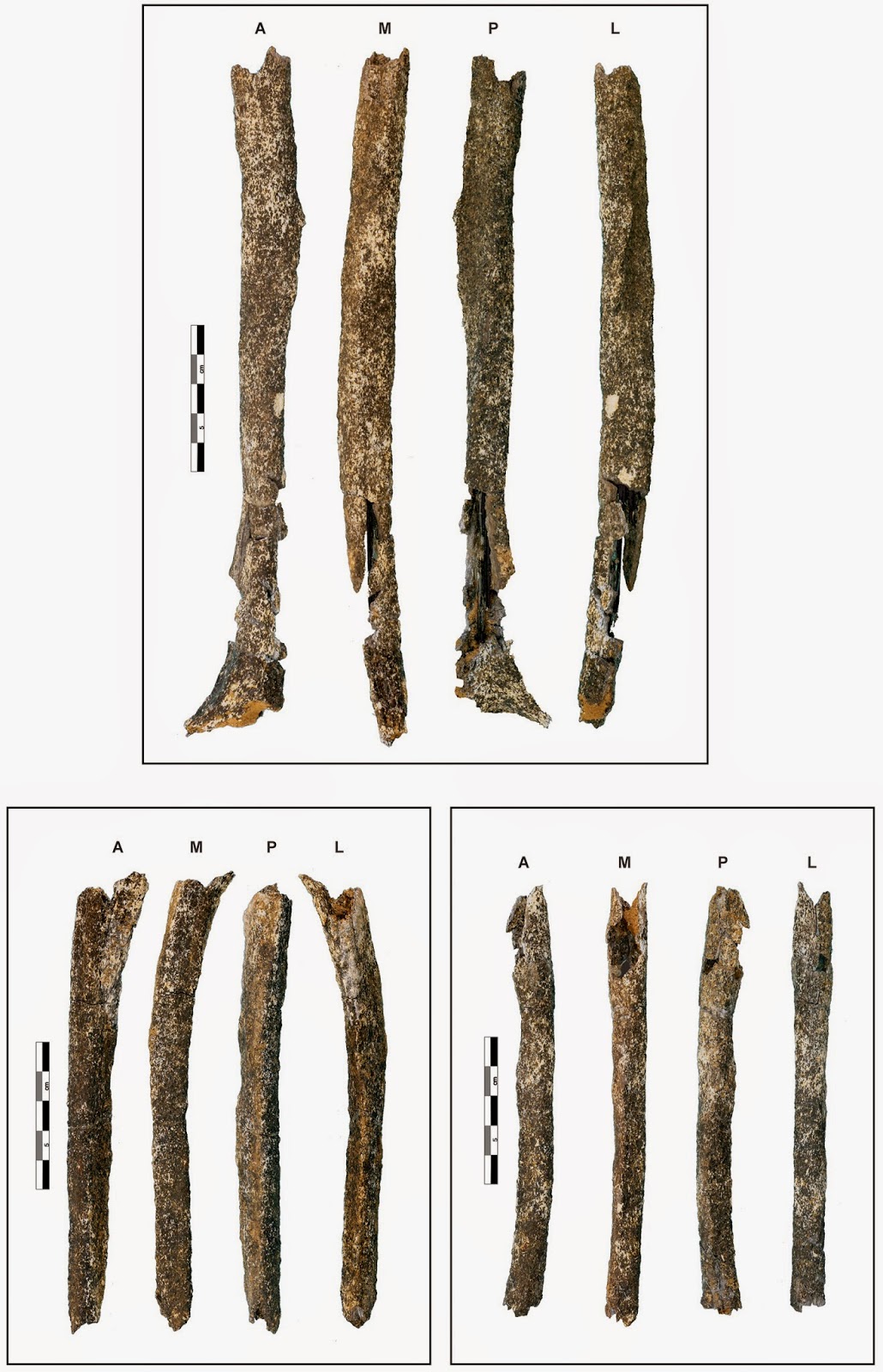 Ritual or symbolic behaviour is generally taken as a sign of cognitive levels comparable to those of modern humans by palaeoanthropologists studying ancient human populations. The earliest signs of this are often taken as the use of red ochre by Neanderthals in Europe and Archaic modern humans in Africa, but some specialists regard this as slightly suspect, since red ochre does have non-ritual applications.

Neanderthals using red ochre at least 200 000 years ago.
Red ochre is a dye made from the mineral hematite (Fe₂O₃). It's use by ancient humans is generally assumed to be ritual, though modern... 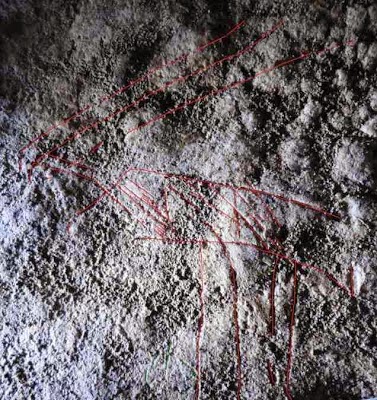