Is the occurrence of multi-kiloton impact events on Earth truly random?

In 1984 palaeontologists David Raup and Jack Sepkowski of the Department of Geophysical Sciences at the University of Chicago analysed the occurrence of mass extinction events on Earth and came to the conclusion that these events appeared to be cyclic in nature. Since no known Earthly phenomena is cyclic on a scale of tens of millions of years, he suggested an extra-terrestrial cause for such events, leading to a brief period when it became fashionable to try to explain such extinction events by means of large impact events. This hypothesis lives on in the Alvarez Impact Event Theory, which postulates that the End Cretaceous Extinction was caused by a large body impacting into the Yucatan Peninsula in Mexico, but has otherwise fallen from favour. Our ability to place dates in ancient events has dramatically improved since the 1960s, and has led scientists to conclude that extinction events were not cyclic in occurrence, and we have come up with robust explanations for most of these events which do not need to invoke extra-terrestrial causes. At the same time our understanding of Solar System dynamics has improved to the point where we can rule out cyclic events on a tens of millions of years scale, and we have found numerous large impact craters on Earth that do not seem associated with even the smallest extinction events.

While major impact events occurring regularly on a tens of millions of years scale has now been ruled out, at the opposite end of the scale we do expect small events to occur regularly on an annual scale, for example we can state with confidence the days on which meteor showers will fall, as the Earth passes through the orbital trail of comets or other bodies which leave trails of dusty or sand-size grains in their paths, resulting in harmless but visible showers of micrometeorites falling on Earth.

In a paper published on the arXiv database at Cornell University Library on 1 September 2014 and accepted for publication in the Monthly Notesof the Royal Astronomical Society, Carlos and Raul de la Fuente Marcos of the UniversidadComplutense de Madrid describe the results of a study in which they analysed the distribution of multi-kiloton impacts on Earth since 2000 in order to determine whether the distribution of these events was truly random.

De la Fuente Marcos and de la Fuente Marcos started by taking data collected by the Comprehensive Nuclear-Test-Ban Treaty Organization, which uses infrasound sensors to look for clandestine nuclear tests, but which have also recorded a 26 events attributed to objects with masses between one and 500 kilotons impacting the Earth’s atmosphere since 2000. This was adjusted for known inaccuracies, such as the 22 September 2007 event which was recorded as occurring over the Indian Ocean, but which was observed over the South Pacific, and other events not detected by the network, such as the 18 kiloton object which impacted the atmosphere over Botswana on 21 November 2009, resulting in a list of 33 events between 2000 and 2013 that were included in the study. Only one of these events, the 7 October 2008 impact of Apollo asteroid 2008 TC3 near Almahatta Sitta in Sudan was detected in advance, and then only by a matter of hours. 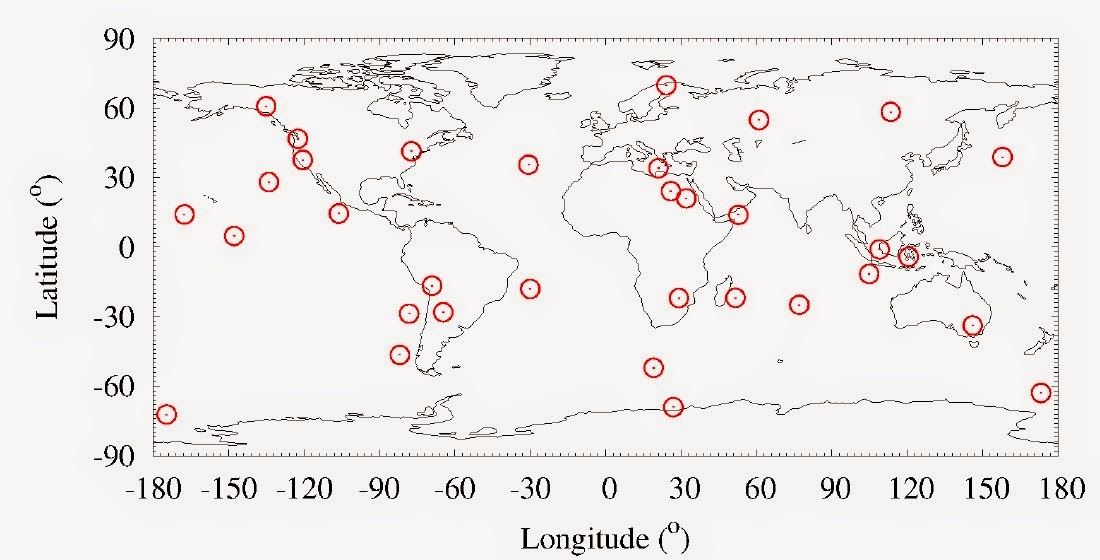 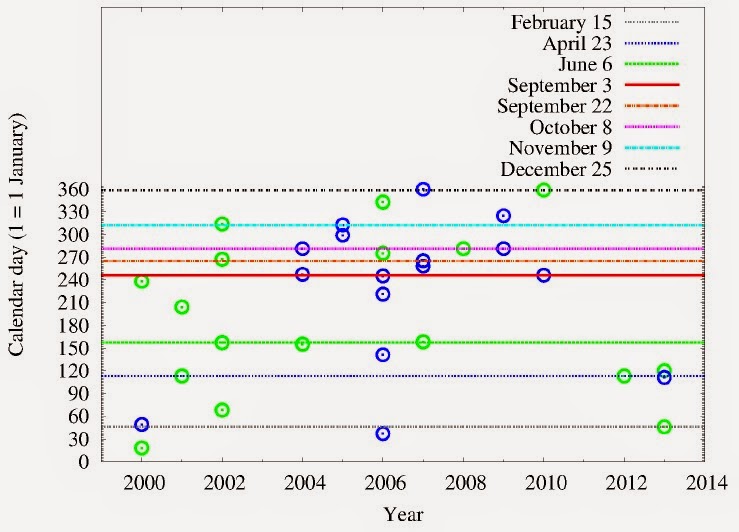 This strongly suggests that the distribution of impact events throughout the year is non-random, and that impacts are preferentially likely to happen on certain days of the year, presumably as the Earth’s orbit intersects other orbital pathways where more than one object follows the same path. This can occur for one of two reasons. Firstly a single object can break up for some reason, and the resultant bodies continue to follow the same path. This most notably occurred in 1994, when comet Shoemaker-Levy 9 broke up into several component bodies after a close encounter with Jupiter, each of these daughter bodies going on to impact the planet. Alternatively different bodies can be shepherded into similar orbital paths by repeated encounters with planets. This occurs because when two bodies pass close to one-another they exchange some momentum energy, so that one body speeds up slightly and the other slows down slightly. When this happens repeatedly between a very large body, such as a planet, and a very small body, such as an asteroid, the smaller body is herded into a resonant orbit with the larger body, and over time many objects can be herded into such orbital paths.

Images of the impacts on Jupiter caused by the breakup of comet Shoemaker-Levy 9 in 1994 at (left) visible and (right) ultraviolet wavelengths. NASA/Hubble Space Telescope.

The 15 February 2013 Chelyabinsk impact event has been studied particularly extensively, due to the large and conspicuous nature of this event, and the impacting body has tentatively been linked to a family of resonant asteroids. The Chelyabinsk object is believed to have been on an orbital pathway intersecting the Earth’s orbit at an angle of 146.5˚. The  South China Sea impact event of 18 February 2000 occurred within three calendar days of the Chelyabinsk event, and this object has also been suggested to have been travelling at 146.5˚ to the Earth’s orbital trajectory, strongly supporting the idea that these bodies hailed from a single population. 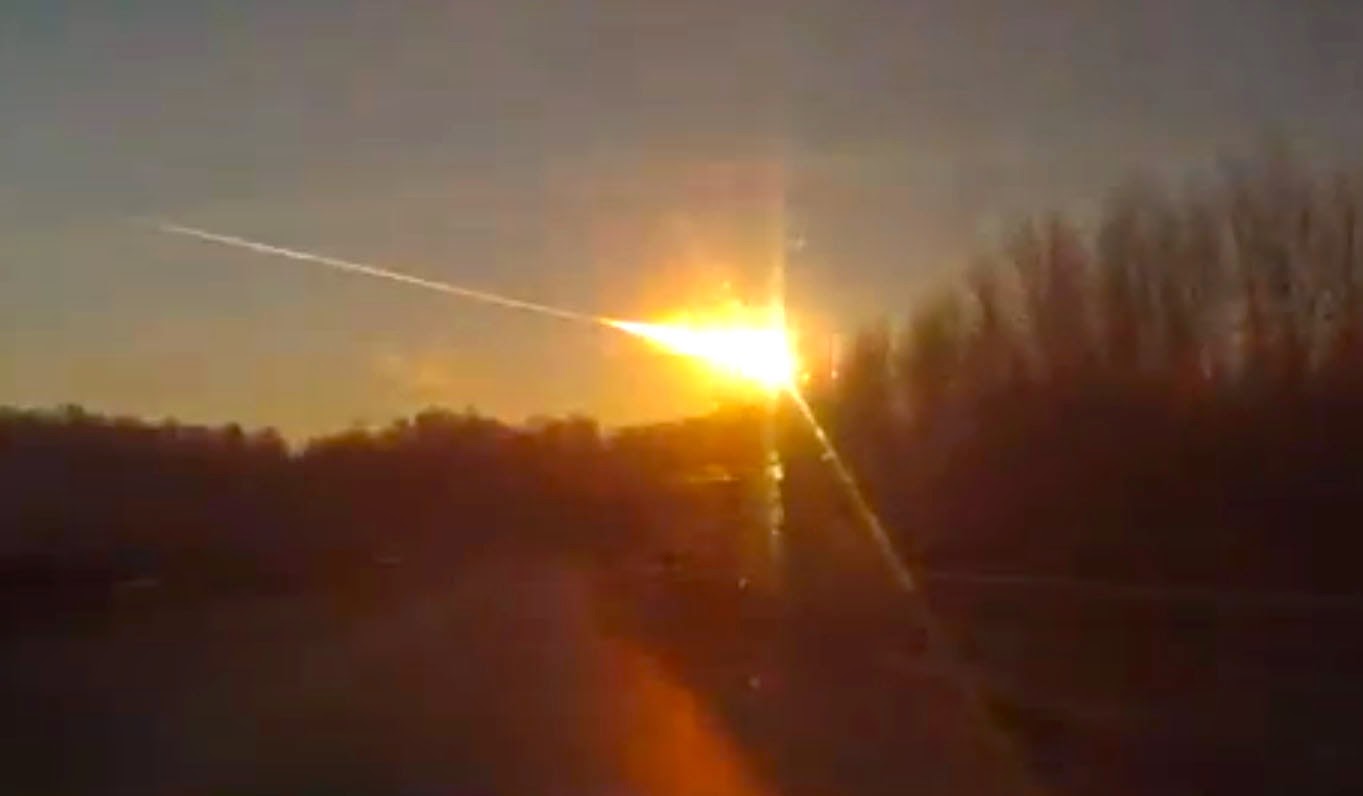 The fireball caused by the Chelyabinsk Bolide. Astro Bob.

The North Pacific object of 23 April 2001 fell between Hawaii and California. The Sutter’s Mill Meteor of 22 April 2012 fell in California and may be related to this. The Sutter’s Mill Meteor if thought to have been on a trajectory at an angle of ~212.5˚ to the orbit of the Earth, falling towards the Sun at the time of the impact, possibly similar to the trajectory of a Jupiter Family Comet (a comet with a period of less than 20 years, and an inclination of less than 30˚ to the plain of the Solar System). The Santiago del Estero object fell in Argentina in 21 April 2013, but appears to have had quite different properties to the other two impacts, and is probably unrelated. 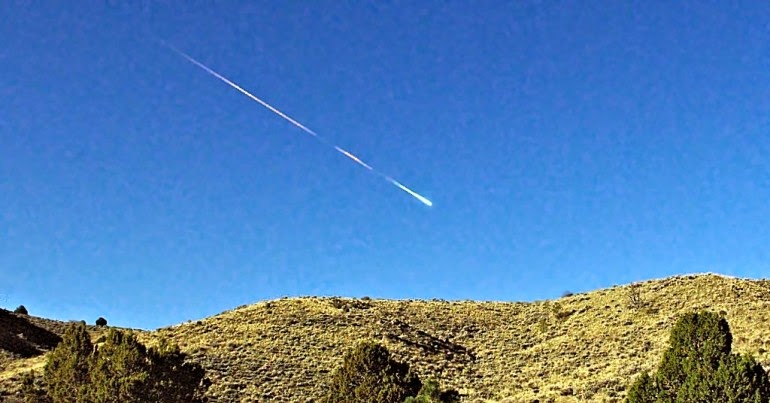 The Crete Bolide of 6 June 2002 and the Reisadalen Event of 7 June 2007, which occurred close to the Norway/Finland border, both involved objects travelling at an angle of 255.5˚ to the Earth’s orbital trajectory, and falling towards the Sun at the time of the impact.  A bright fireball observed over Washington State on 3 June 2004 may also be related to these objects.
The Southern Ocean event of 3 September 2004, which fell near Antarctica, the Indian Ocean Event of 2 September 2006 and the South Pacific Event of 3 September 2010 all appear to be related. All were apparently travelling at an angle of 340˚ to the orbital path of the Earth, and falling towards the Sun at the time of the impact. It has been suggested that the parent body of the Southern Ocean event was a small Aten Family Asteroid (an asteroid which orbits mostly inside the orbit of the Earth, but which is further away some of the time), with an orbital period of 293 days. Aten Family Asteroids are thought to have particularly short lifetimes, as the planets of the Inner Solar system are quite close together, so that orbits are easily perturbed by repeated encounters with these planets, resulting in objects breaking up, colliding with something or being thrown out of the system.

The South Pacific event of 22 September 2007 and the Vitim event over Siberia on 24 September 2002 appear to be related, both objects having been travelling at an angle of 359˚ to the Earth’s orbit prior to their impacts.

The Indian Ocean event of 7 October 2004, the Almahatta Sitta impact in Sudan on 7 October 2008 also appear to be connected, both having involved objects travelling at 14˚ to the Earth’s orbit. The Almahatta Sitta impact involves the only asteroid in the study observed prior to its impact on the Earth, 2008 TC3, which in turn has been linked to the Nysa-Polana Asteroid Family (expand). The South Sulawesi event of 8 October 2009 appears to be unrelated. 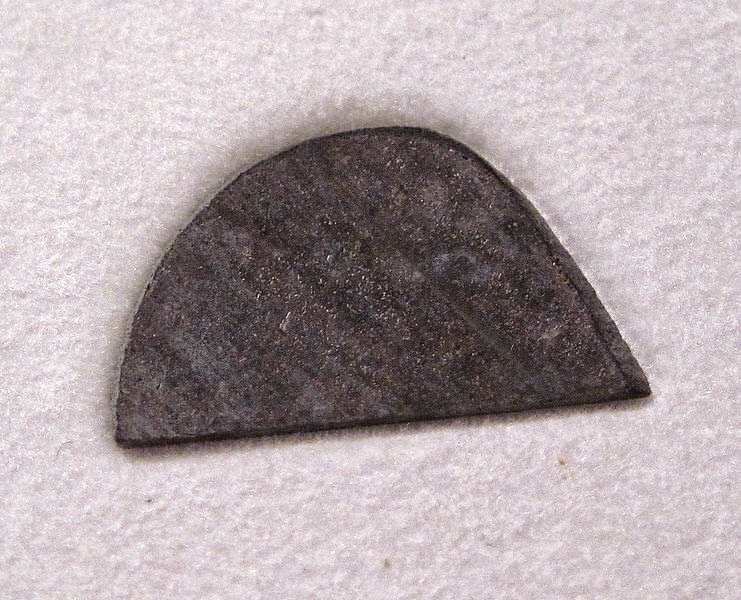 The 10 November 2002 North Pacific impact and 9 November 2005 New South Wales impact also appear to be related. Both caused by objects travelling at almost 47˚ to the Earth’s orbital trajectory.

De la Fuente Marcos and de la Fuente Marcos are confident that there is less than a 5% chance that all of the objects occurring on similar trajectories on similar dates could be coincidences. They note that streams of asteroids containing large bodies that intersect the Earth’s orbit are unlikely to persist for very long periods of time, as such bodies are likely to either impact the Earth or Moon or be disrupted into different orbits by their gravity or those of nearby planets. However such streams of asteroids could still potentially persist for several decades, leading to a series of connected impacts. 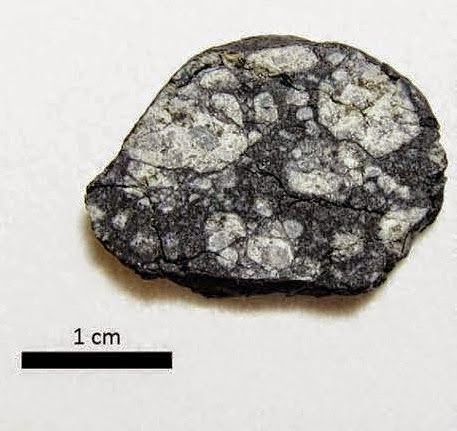 The Chelyabinsk Meteorite and its implications for the origin of the Baptistina Asteroid Family.

The Chelyabinsk Meteorite detonated in the atmosphere over the southern Russia on 15 February 2013 with an equivalent energy to 500 kilotons of TNT. From the size of the explosion it is estimated to have... 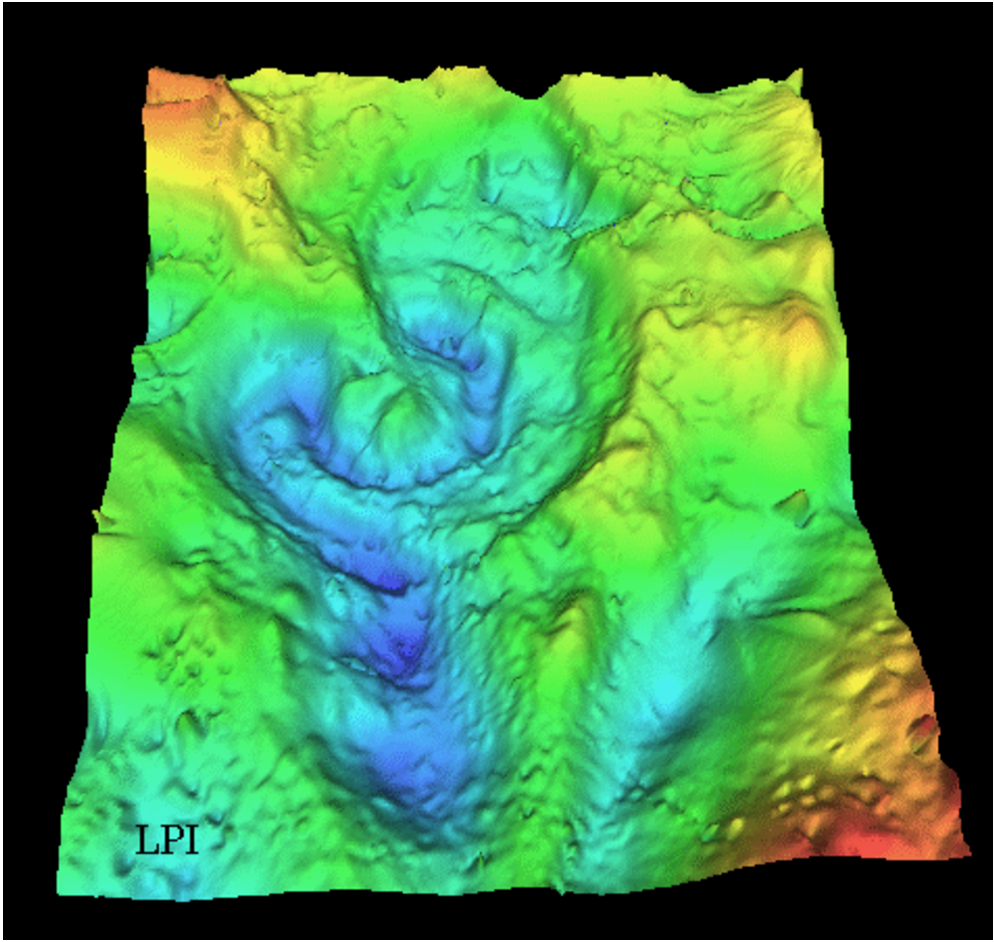 The nature of the Chicxulub impactor.

65 million years ago, at the end of the Cretaceous, the Earth underwent the last of the five great mass extinctions recorded in the fossil record. While this is by no means the largest of these events, it is the most familiar to the general public, as it was responsible for the extinction of, amongst other things, the non-Avian Dinosaurs and the large marine Reptiles of the... 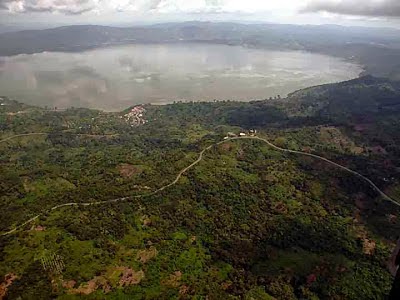 The origin of the Bosumtwi Impactor.

Lake Bosumtwi is an 8 km diameter roughly circular lake about 30 km to the southeast of Kumasi in the Ashanti Province of Ghana. It is thought to have been created by a large meteorite impacting the Earth roughly 1.07 million years ago during the Late...