Stone tools from the Middle to Late Pleistocene of the Nefud Desert.

The Nefud Desert lies in the northwest of Saudi Arabia, and is thought to have been one of the key obstacles that early Humans, and other Hominids, had to pass as they expanded out of Africa into Southwest Asia. The area is close to the southern extent of the range of the Neaderthals, who occupied much of Europe and West Asia during the Middle Pleistocene, and it is thought that Modern Humans dispersed through the region between about 130 000 and 75 000 years ago. The Nefud Desert has yielded a number of sites from which a variety of stone tools have been collected, however while a variety of Hominid remains have been found in other areas of the Middle East, none have been found from the Nefud, making it hard to assert the identity of the Nefud toolmakers with any confidence. 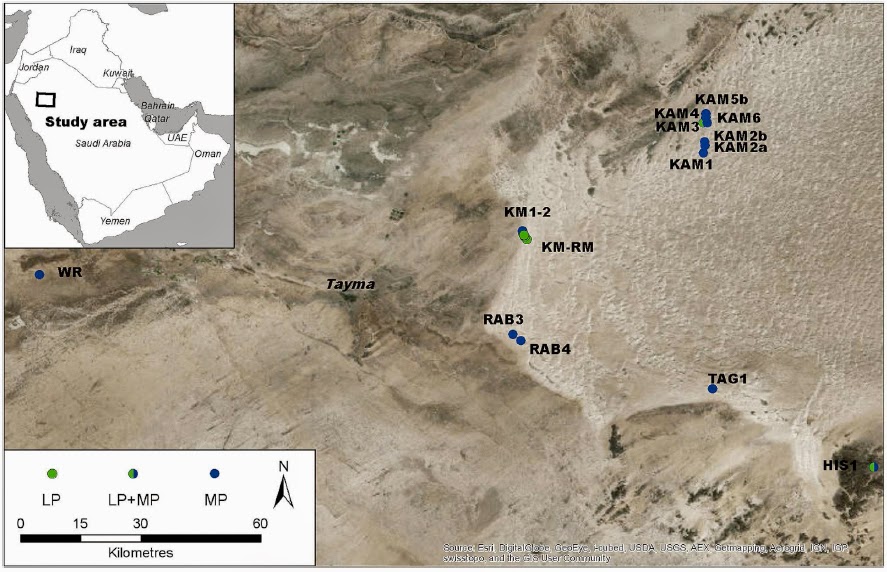 Map of the Middle and Upper Palaeolithic sites found during the Palaeodeserts 2014 survey of the southwestern Nefud. KAM 1e5 refer to Khall Amayshan sites; KM 1e2 andKM-RM refer to the sites at Khabb Musayyib; TAG 1 refers to Ta'is al Ghadah; HIS 1 refers to a site along a line of jibal; RAB 3 and 4 refer to the Al Raba sites; WR refers to the Wildlife Reserve site. Scerri et al. (2014).

The first Khall Amayshan site (KAM 1) was first discovered in 1998 and is thought to date to between 117 000 and 99 000 years ago. The site represents a circular lake which persisted some time, laying down at least 3.24 m of layered marls, silts and sands, from which fossils of a number of freshwater Diatoms have been recovered, providing a reliable guide to both the dates of the deposits and the conditions under which they were laid down. A variety of stone tools have been recovered from these lake deposits. 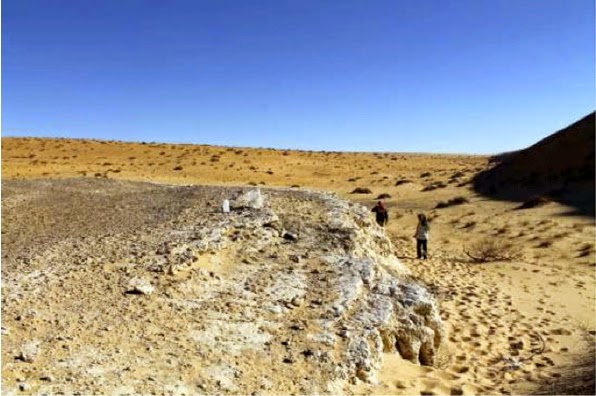 Exposed lakebed and location of the sampled section at KAM 1. Paul Breeze in Scerri et al. (2014).

Scerri et al. recovered 106 stone artifacts from this site, all being of good quality and most made of quartzite, with some chert objects; the quartzite appears to come from the local region, but the chert is from further afield. Eleven cores (stones from which numerous flakes had been removed) were found, along with numerous flakes. Most were of the Levallois type (a distinctive style of tool making first described from tools from Levallois, a suburb of Paris, in the nineteenth century; flakes are chipped away from the edges of a stone core in a way that leaves it resembling a tortoise shell), which is considered to be Middle Palaeolithic. Scerri et al. suggest that the artifacts were left by toolmakers who were sporadically visiting the lake, and working stone by the lake edge. 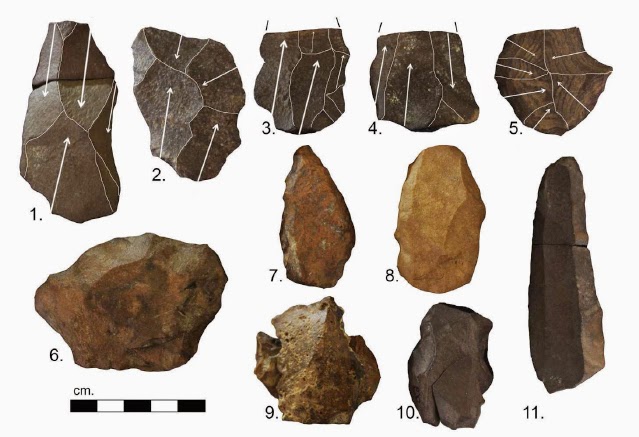 The second Khall Amayshan site (KAM 2) was discovered for the first time during this survey. It yielded only two poorly preserved handaxes from a marl deposit, which were not collected. However the site was recorded for potential further investigation.

The third Khall Amayshan site (KAM 3) was also discovered for the first time during this survey. It produced a small number of Late Palaeolithic artefacts from a Diatom bed. Again these objects were not collected, but the site was identified for later investigation. 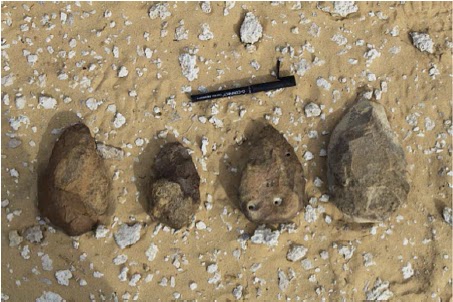 The fourth Khall Amayshan site (KAM 4) appears to represent an ephemeral lake site, where lakes appeared and disappeared over a long period of time. While these have not yet been accurately dates, the site yielded a total of 1561 artefacts, from several distinct phases of activity, ranging from Acheulean (expand) to Middle Palaeolithic in nature. Some handaxes from the site were made of a distinctive rock with a ‘wood grain’ pattern, which has also been found at the KM sites and KAM 1, but which has yet to be identified. 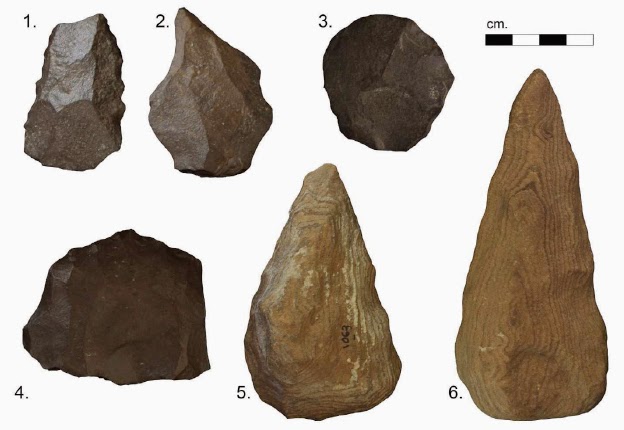 The fifth Khall Amayshan site (KAM 6) consisted of lake bed deposits made up of Diatomite with preserved Crayfish burrows, overtopped by gypsum beds (evaporite deposits probably formed as the lake dried up). The site yielded several cores and flakes of the Levallois type, which were not collected, the site being recorded for further investigation later.

The first Al Raba site (RAB 3) comprises an area of about 1.16 km2 of reworked sediments, mostly gypcretes and silts, which also produced Middle Palaeolithic objects; it is unclear if these objects are also reworked. These objects were not collected, but the site was recorded for further investigation.

The second Al Raba site (RAB 4) comprised an area of lake sediments about 1.5 km to the southeast of RAB 3. This also yielded Middle Palaeolithic artifacts, but again these objects were not collected, but the site was recorded for further investigation.

The two Khabb Musayyib sites (KM 1 and KM 2) are a pair of gypsum and marl lakeshore deposits, apparently derived from the remains of a single lake-bed which has otherwise eroded away. These sites have yielded a variety of Early Palaeolithic remains, including small, finely made handaxes, a chopper core and Levallois cores and flakes. A site of material for tool-making was also found at KM 2, with sandstone and quartz cobbles along with further tools. 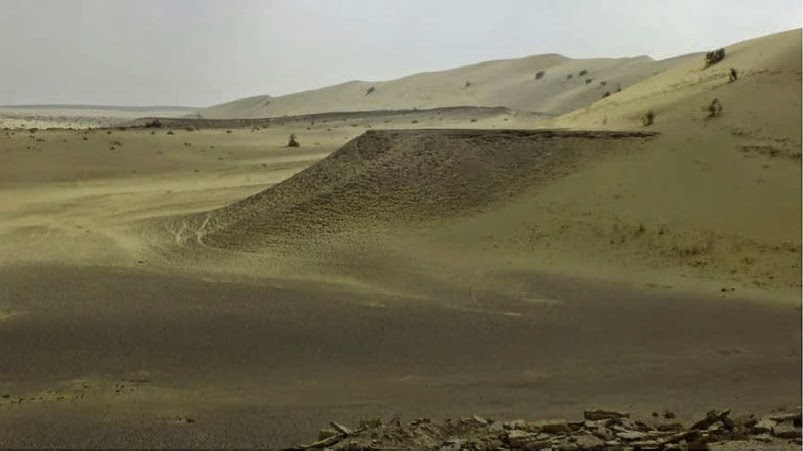 The Khabb Musayyib sites yielded a total of 68 artefacts, mostly made from quartzite, though one handaxe made from high grade chert was also found. The artefacts from the lakeshore at KM2 appear to date from a different period to the artifacts at the material source. 57 objects were obtained from the lakeshore deposits, 40 of these being small, well-made bifaces (cutting tools with two cutting edges), averaging 91 mm in length. 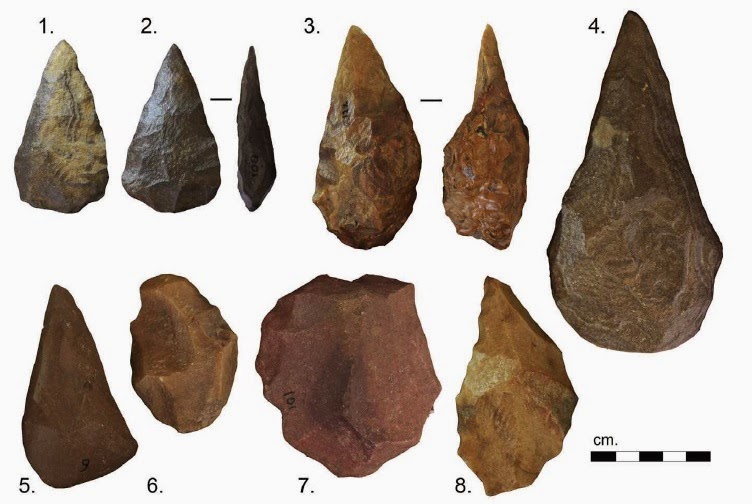 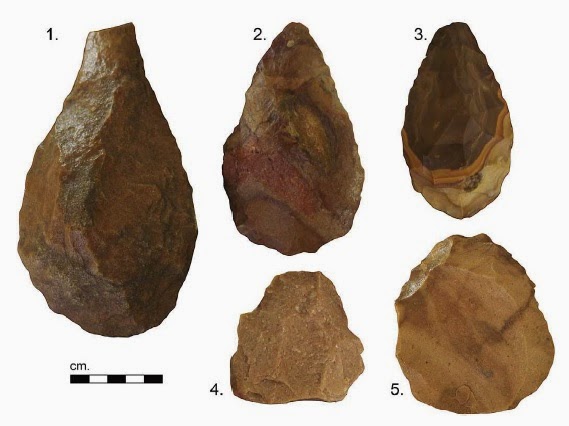 The T'is al Ghadah Basin site (TAG 1) comprises a lake bottom with several well preserved horizons yielding numerous surface fossils. On top of this series of beds a number of collections of stone tools were found. The fossil remains have been dated from the Early Pleistocene to about 410 000 years ago, while analysis of the uppermost sediments suggest ages of 328 000 to 310 000 years ago. It is unclear if the artifacts found at the site date from this period or are more recent, but if they are then they represent some of the oldest Middle Palaeolithic material found in the Nefud.

76 artefacts were recovered from TAG 1, predominantly from scatter sites in two different areas of the basin. One such scatter site produced a distinctive set of simple cores and flakes, of apparent early Middle Palaeolithic origin made from a pale amber quartzite. Cores from elsewhere in the basin were predominantly of a darker quartzite, with a few chert objects, and comprised small cores and core fragments and flakes. This tool set includes bifaces, discoidal cores, bifacial flakes, Levallois flakes and simple blade cores, suggesting a late Early Palaeolithic or early Middle Palaeolithic origin. 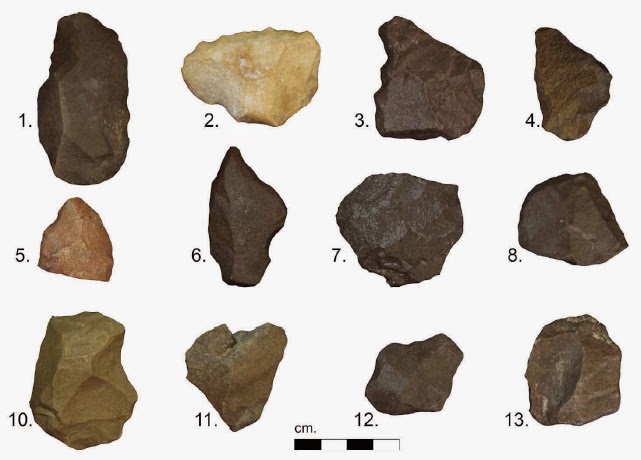 The Tayma Wildlife Reserve site (WR) comprises an area of exposed bedrock with eroded channels, with some infill material, leading downwards to an exposed mudflat. The material gathered here was trapped in the erosion channels. Scerri et al. recovered 94 flakes, two bifaces and 35 cores from this site, most made of local rock, but including some quartz, limestone, chert and rhyolite also used. This site is thought to contain material from several phases of occupation, but is of a broadly Middle Palaeolithic origin. 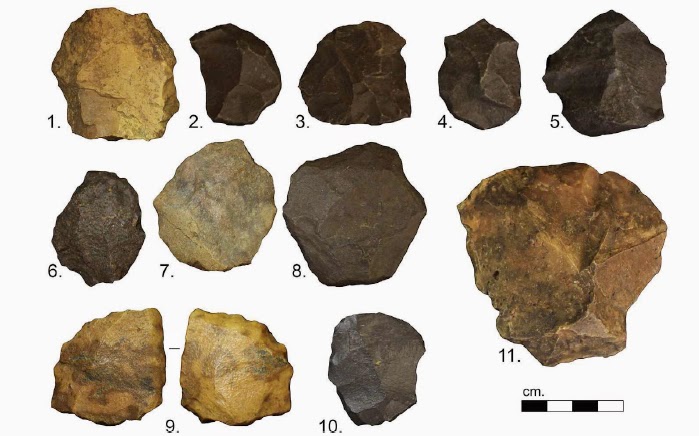 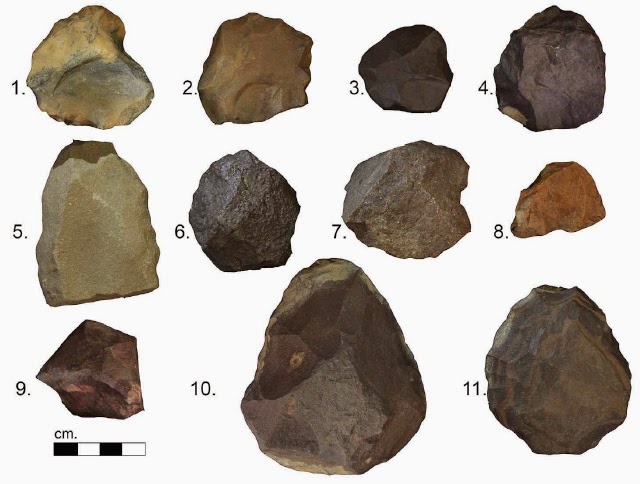 The Munasafiyah Basin  site (HIS 1) comprised a scattered Palaeolithic site along the lower slopes of a jibal (line of rocky hills). The site featured considerable rock art, as well as artefacts of Early and Middle Palaeolithic origin, including handaxes, bifaces, Levallois cores and flakes, débordant flakes, core tablets and other material. All appeared to be made of local quartzite, suggesting the toolmakers were using scree slopes at the foot of the jebel as a source of material. None of the material was collected, but the site was marked for further investigation.

The sites yielded a great diversity of Late Pleistocene material, but very little from the Holocene, suggesting that conditions were considerably more favourable in the Nafud then. The Early Palaeolithic material suggests a long period of continuous occupation of the area, associated with fairly stable lakes, which existed for long periods of time. The Middle Palaeolithic material is more scattered and suggests more temporary occupation, associated with ephemeral lakes, which were not always present. Scerri et al. suggest that the area was occupied repeatedly from neighbouring areas, such as Jordan and the Sinai, when conditions were favourable, then abandoned again when the lakes dried up. 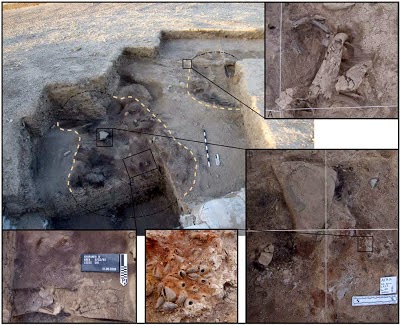