Jamaica is considered to be a biodiversity hotspot for Land Snails, with over 505 species considered to be endemic to the island (i.e. coming from the island and not found anywhere else) and 562 species found on the island in total. This is despite the island having a surface area of only 11 500 km2, and having been exposed above the ocean only since the Middle Miocene, about 11.6 million years ago. The neighbouring islands of Cuba and Hispaniola are also thought to be hotspots for Land Snail diversity, but reliable lists of species from these islands are not available. Puerto Rico is considered to have an impoverished Land Snail fauna (i.e. very few species are found here).

This makes the history of Snails on Jamaica of particular interest to Malacologists (scientists that study Molluscs), but unfortunately only a single site on the island, the late Pliocene Bowden Shell Bed, has yielded Snails from before the Late Pleistocene, and this contains highly mixed mass flow (landslip) deposits containing a mixture of terrestrial and marine fauna, from which only six species of Land Snail have been recovered. The situation for the Late Pleistocene is considerably better, with eleven previously recorded sites that have yielded over a hundred species of Snails. However, like the Bowden Shell Bed, the majority of these are mass flow deposits containing Snails that have been swept out to sea in landslides, and the majority of the remainder are cave deposits, which also yield Snails that are likely to have been moved from their native environment.

To date only a single site, Great Pedro Bluff, has been found which appears to contain Snails preserved at the location where they were living, in this case a lithified sand dune deposit in St. Elizabeth Parish in south central Jamaica.

In a paper published in the journal Alcheringa on 21 January 2013, Stephen Donovan of the Department of Geology at the Naturalis BiodiversityCenter in Leiden and Christopher Paul of the Department of Earth Sciences at the University of Bristol, describe a second site yielding Land Snails in situ from the Late Pleistocene of south central Jamaica. This site, Round Hill on Farquhar’s Beach, is 35 km east of Great Pedro Bluff, in Clarendon Parish.

The deposits at Farquhar’s Beach are conglomeritic (contain rocks of mixed types and sizes), with large boulders, cobbles and pebbles of white limestone mixed in with calcarious mudstones, sandstones and paleaosols (lithified soils) which have yielded numerous root casts and fossil Snails. The precise age of the beds has not been determined, but it is thought to be of roughly equivalent age to the Great Pedro Bluff site, and certainly less than 100 000 years old. 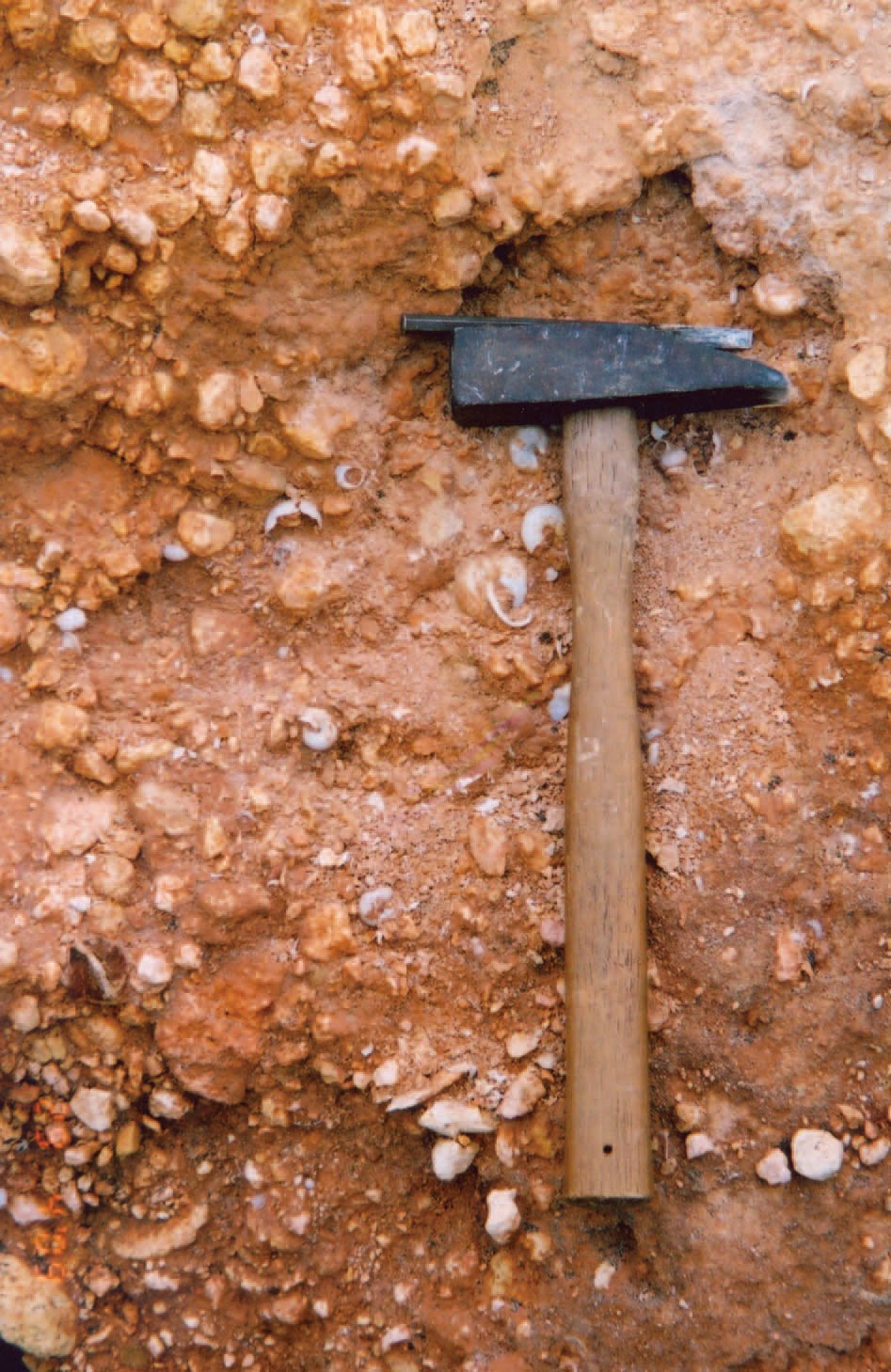 Bedding surface of a fallen boulder in the Farquhar’s Beachred beds to show the common association of white limestone cobbles in a matrix-supported red sandstone and with common terrestrial snails. Length of hammer is about 410 mm. Donovan & Paul (2013).

The first specimen described from Round Hill is assigned to the species Alcadia citrinolabris, which has previously been recorded from the Late Pleistocene of Clarendon and Manchester Counties, and is still found living in the area. It is a globular Snail shell, 13 mm in diameter by 10 mm high, and not well preserved.

The second specimen described is assigned to the species Lucidella yallahsensis, which is still found in southeast Jamaica, but is no longer found as far west as Farquhar’s Beach. Previous members of this genus, some of which may be assignable to this species, have been recorded from the Red Hills Road Cave deposits, which have been dated to about 30 000 years old, and other members of the genus have been found at other Pleistocene sites and the Pliocene Bowden Shell Bed. This is the smallest and most delicate specimen recorded from Round Hill, and was preserved inside the shell of another, larger Snail. It is a low, conical shell 3.0 mm in diameter and 1.8 mm high. 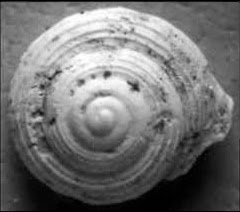 Forty four specimens are assigned to the genus Poteria, though poor preservation prevents the assignment of these to a specific genus; Donovan and Paul are unable to even determine whether the sample represents one or more species. Members of the genus have previously been recorded from the Pliocene Bowden Shell Beds and most of the Pleistocene Snail-yielding deposits on Jamaica, and are still found living on the island, including close to Round Hill. These are low conical shells with 4.5-4.75 whorls reaching up to 21 mm in diameter and 15 mm high.

A single shell is assigned to the genus Adamsiella, but not to a specific species. This is well preserved, even retaining some traces of pigmentation, however it does not conform closely to any known species form Jamaica, and as these tend to be quite variable, and only a single specimen was found, Donovan and Paul refrain from assigning it to a species. Members of the genus have been recorded from several Pleistocene cave deposits on Jamaica and are still found on the island, but not in the area around Farquhar’s Beach. 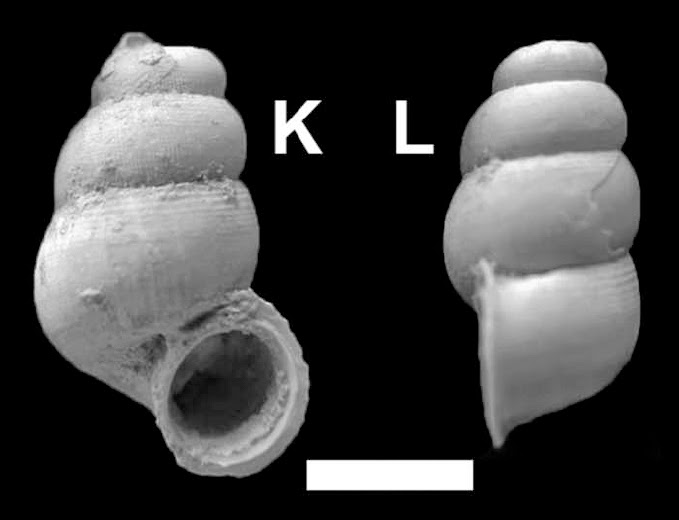 Nine specimens are assigned to the species Annularia mitis, which is still found in the area, apparently being restricted to St. Andrew, St. Catherine and Clarendon Parishes on Jamaica. Member of the same genus have previously been described from Pleistocene deposits in Coco Reef Cave and Sheep Pen Cave. These are broad, high shells with delicate decoration, reaching 19 mm high and 16 mm wide. 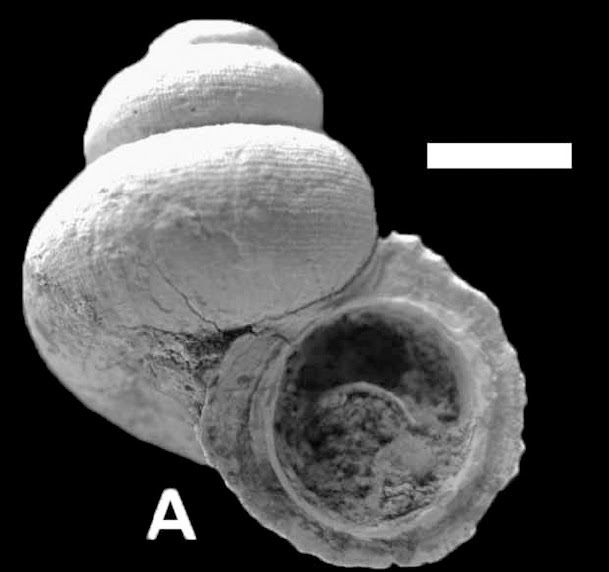 Eight specimens are assigned to the species Parachondria crenulosa, which is still found in Manchester, Westmoreland and Clarendon Parishes, and which has previously been recorded as a fossil from Clarendon Parish. Members of the same genus have been recorded from the Pliocene Bowden Shell Beds as well as several Pleistocene sites. 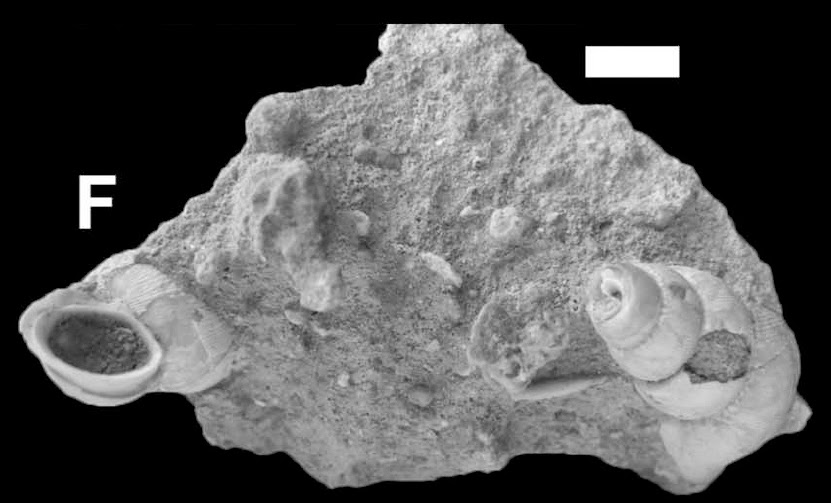 Twenty-one specimens are assigned to the species Urocoptis brevis, which is still common in dry limestone habitats along the south coast of Jamaica. Members of the same genus have been found in most Snail-yielding Pleistocene deposits from Jamaica. These are small cylindrical shells with 8.25-9 whorls, reaching 16-20 mm in height. 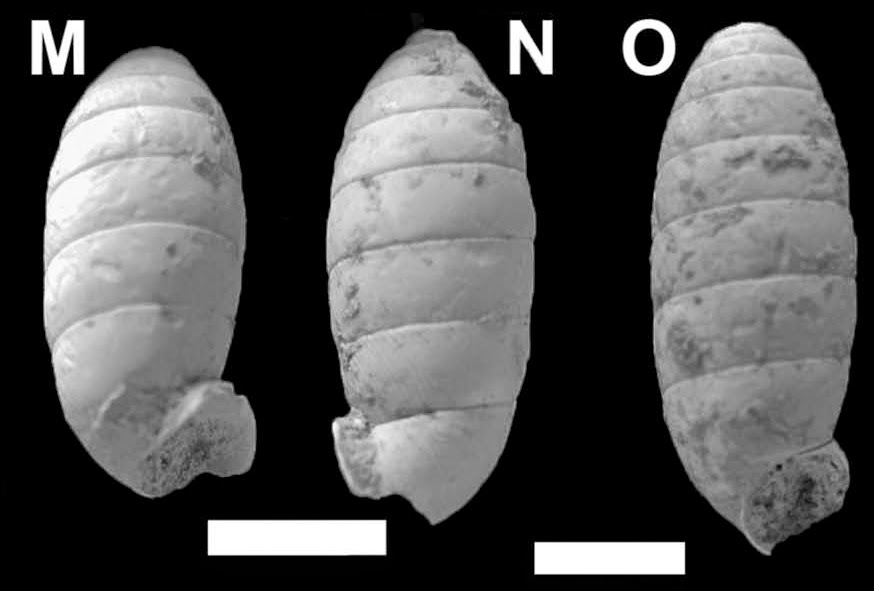 Eighteen specimens are assigned to a second species of Pleurodonte, Pleurodonte sublucerna. This species is common throughout southern and eastern Jamaica today. These are large lenticular snails with five flat whorls, reaching 27-34 mm in diameter and 15-17 mm in height.

Fifty-eight specimens, one of which has four juveniles of the same species preserved internally, are ascribed to the species Sagda centralis. This species is still found in the area, and members of the same genus have been recorded from every Snail-yielding Pleistocene deposit on Jamaica. These are high, conical, come-shaped shells with 8-9 whorls, reaching 19 mm high and 21 mm in diameter. 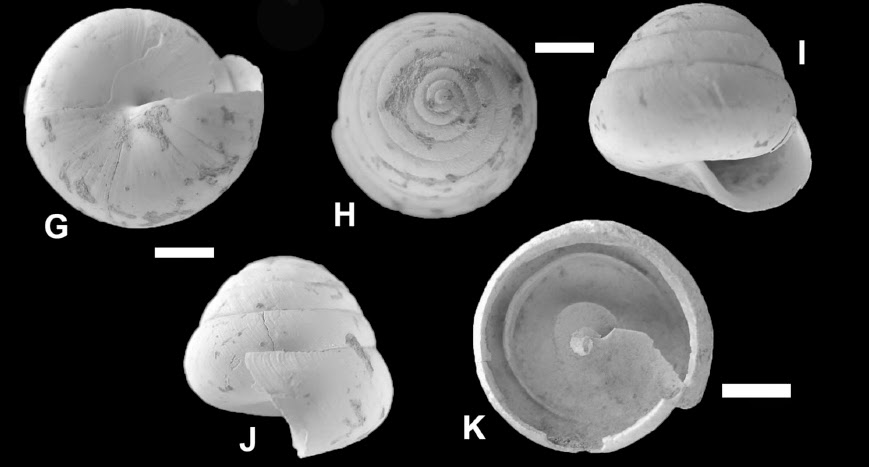 Two new species of Cyclophoroid Land Snails from Thailand and Peninsula Malaysia. The Cyclophoroidea are a large and diverse group of terrestrial Gastropods, occupying a range of ecological niches from species that live entirely below the soil surface to species that spend their entire life cycles within the tree canopy. The Snails are disk or... 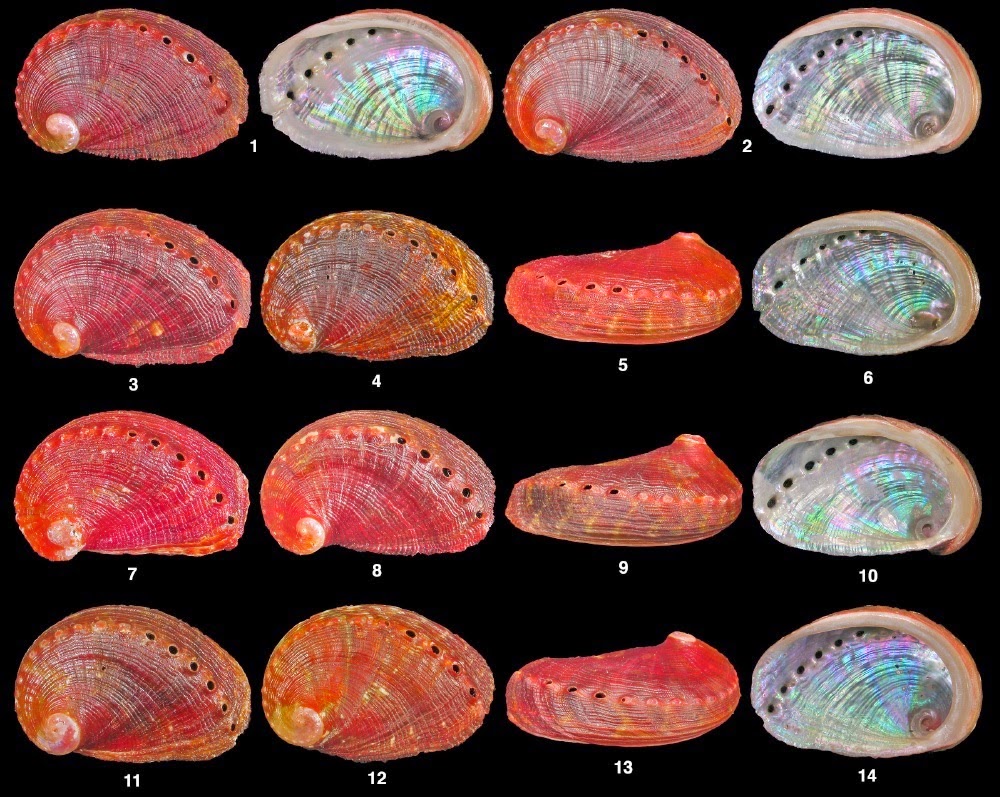 A new species of Abalone from São Tomé & Príncipe.
Abalones (Haliotidae) are large, flattened marine Gastropods with distinctive shells. They have a row of small circular openings on their shells used for breathing, and a mother-of-pearl interior. They are widely eaten, and farmed in many areas, though in...

Three new species of Vetigastropod Snails from the Plio-Pliestocene of The Philippines.
Vetigastropods are considered to be the most ancient, and primative, group of Snails. They are exclusively marine, but found in almost all marine environments, from the intertidal zones to the deepest abysal depths...