The ambers of Chiapas State, Mexico, were laid down in the Miocene (and possibly Oligocene) in shallow marine environments. The amber is thought to be derived from resin secreted from a Leguminous tree of the genus Hymenaea, which lived in mangrove forests along the Caribbean shoreline. This amber is almost identical to amber produced in similar mangrove forests during the Miocene in the Dominican Republic and to a lesser extent other parts of the Caribbean, and a thriving, and sometimes illegal, trade in these fossils, combined with poor recording by commercial fossil collectors (particularly those acting illegally) means that fossils in Caribbean amber derived from private collections can be hard to connect to their point of origin. To date two Scorpions have been described from Chiapas Amber, and at least four further specimens attributed to this source are known in private collections, however the exact provenance of these fossils is unclear as precise data on the outcrops which produced them is unavailable.

The new Scorpion is placed in the large (and probably paraphyletic – not containing all the descendants of the last common ancestor of the group) genus Tityus, within the Family Buthidae, and given the specific name apozonalli, which means ‘sea-bubble’ or ‘sea-foam’ in the Náhuatl language, and which was the term used amber by the pre-Columbian Aztecs. 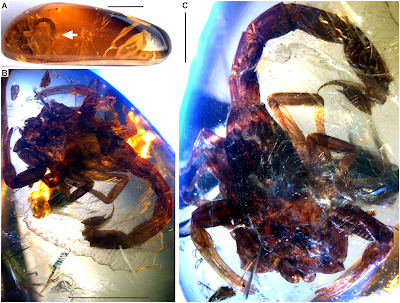 Tityus apozonalli is thought to be most closely related to the modern species Tityus clathratus and Tityus columbianus, which are known from the Caribbean Islands, Central America and northern South America, as well as showing features in common with members of the genus from Dominican Amber, and to a lesser extent Tityus knodeli, which is attributed to Chiapas Amber, though of uncertain origin. A single specimen assigned to the genus has been described from Baltic Amber from Europe, Tityus eogenus, however this was described in 1869 and is now missing, and so is considered somewhat dubious. 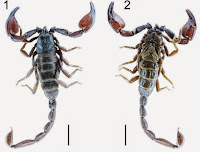 Scorpiops ingens: A new species of Scorpion from Tibet.
The Scorpion genus Scorpiops is a wide ranging and highly specious group of medium-sized, generally brown Scorpions. There are currently about a dozen species known from China, all of which are found in Tibet. 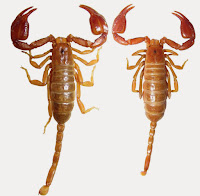 A new species of Wood Scorpion from Anatolian Turkey.
Wood Scorpions of the genus Euscorpius are found in Europe from Iberia to Russia, as well as North Africa and southwest Asia, and is therefore one of the best studied Scorpion genuses, with eighteen described species grouped into four subgenera, and numerous subspecies. Despite this it is thought that there is still much to be learned about its taxonomy, and that...