A fifteen-year-old boy was killed and two other people were injured  at about 6.15 am local time (0.30 am GMT) on Friday 31 May 2013, when house in the Khadapakhi  squatters settlement in Kathmandu was partially destroyed by a landslide, following heavy rains. The house was part of a settlement comprising around 250 buildings on a spoil heap left over from the construction of the Tribhuvan University Teaching Hospital in 1984. The settlement is considered to be at high risk during the monsoon system, when it is prone to such landslip events. 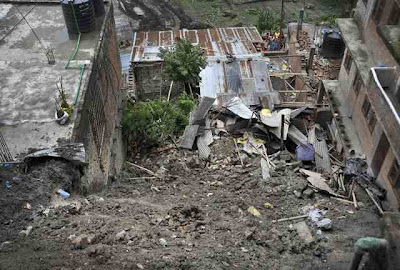 The aftermath of the Khadapakhi landslide, seen from above. Nimesh Jang Rai/The Himalayan Times.

The boy who died has been named as Ram Bhagat Ram of Saptari District, who was taken to the Tribhuvan University Teaching Hospital by police but pronounced dead on arrival. The two injured people were named as Shivanandan Ram, 25, and Devilam Mandal, 60, both also from Saptari District. The three were renting the property, the owner of which did not live on-site. The three had apparently arrived in Kathmandu this week, with the intention of traveling on to the Gulf States in search of work.

Landslides are a common problem after severe weather events, as excess pore water pressure overcomes the sediments cohesion and allows it to flow downhill. Approximately 90% of all landslides are caused by heavy rainfall.