A pregnant woman was reportedly shot and killed by security forces during rioting in the southern Tanzanian city of Mtwara on Thursday 23 May 2013, that led to the burning of 10 houses, as well as several government offices and buildings belonging to the ruling Chama cha Mapinduzi party and the demolition of a bridge connecting Mtwara to nearby Lindi. The rioting started on Wednesday 22 May after an announcement from the government that the construction a pipeline carrying natural gas from Mtwara to Dar es Salaam was to go ahead. Residents of Mtwara had been protesting against the proposed pipeline for some time, demanding that the newly discovered gas field be used to develop industries locally rather than transported to more developed parts of the nation. This is not the first time protests over the pipeline have turned violent; four people were killed in rioting in Mtwara in January. 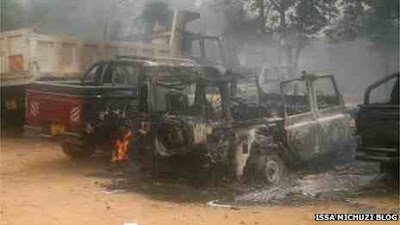 
The Tanzanian Government has reacted strongly to the protests, deploying large numbers of police and soldiers to the city. At least 90 people have been arrested in house-to-house searches for protestors, and residents are claiming some of the burned buildings were the result of police actions rather than rioting, while security forces have claimed the protestors are targeting journalists that the feel are pro-government.


The planned pipeline will cary gas extracted near Mtwara 500 km to a new processing plant in Dar es Salaam. However many people would rather see the plant, and the jobs it would bring, in Mtwara. Mtwara was constructed in the 1940s as a center for the groundnut trade, the plan being to grow the nuts in southern Tanzania in order to produce oil for the British market, however the climate proved to be unsuitable and the project was abandoned in 1951, leaving the city without an industry to support its economy. 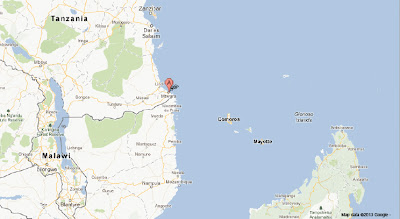 Mtwara is located in southern Tanzania, close to the border with Mozambique. Google Maps.

Tanzanian President Jakaya Kikwete has described the protests as 'unacceptable' and promised a crackdown on protestors. He went on to say that the resources belong to the nation and not the region. Tanzania has an economy largely based on agriculture, but has been seeking to expand its mineral and hydrocarbons extraction industries. However this has led to allegations of local communities suffering while the benefits accrue to central government and foreign companies.