CoRoT-27b, a massive, dense planet on a short-period orbit about a G-type star.

In a paper published in the journal Astronomy & Astrophysics on 21 February 2014 and on the arXiv database at Cornell University Library on 17 January 2014, a team of scientists led by Hannu Parviainen of the Instituto de Astrofísica de Canarias, the Departmento Astrofísica at the Universidad de La Laguna and the Department of Physics at Oxford University, describe the discovery of a large exoplanet in the 2MASS 1183241962 system using the CoRoT Space Telescope with backup observations by the 3.6 m telescope at the European Space Agency’s La Silla Observatory in Chile.

With the conformation of a planet in the 2MASS 1183241962 system discovered by the CoRoT Space Telescope it is renamed the CoRoT-27 system (i.e. the 27th system with a confirmed planet discovered by CoRoT), with the star becoming CoRoT-27A and the planet CoRoT-27b (when naming bodies in other stellar systems stars are given upper case letters and planets lower case letters). 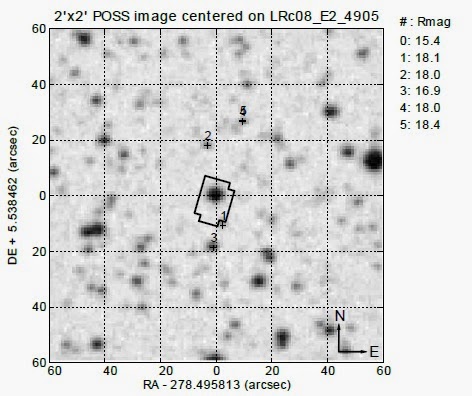 POSS image showing the surroundings of CoRoT-27 and the photometric aperture mask (solid line). One contaminating star (marked as 1) falls partially within the aperture mask, with an estimated contamination factor of 2:4% 0:95%. Parviainen et al. (2014).

CoRoT-27b orbits CoRoT-27A at an average distance of 0.0476 AU (i.e. 4.76% of the average distance at which the Earth orbits the Sun which is also 8.4% of the distance at which Mercury orbits the Sun), completing one orbit every 3.58 days (86 hours). It has an estimated mass of 10.39 times that of Jupiter and an estimated radius of 1.007 times that of Jupiter, giving it an approximate density of 12.6 grams per cubic centimetre (compared to 5.5 grams per cubic centimeter for Earth, the dens).

The high mass of CoRoT-27b takes it close to the range of smaller Brown Dwarfs; objects intermediate between planets and stars, where hydrogen fusion does not occur, but where deuterium (a heavy isotope of hydrogen) fusion can occur. The lower mass limit for this is thought to be between 11 and 16 Jupiter masses, though mass is not the only factor involved, the potential for deuterium fusion also depends on the metal and helium content of the body. It has been suggested that the two types of bodies could be differentiated by their formation, with planets forming by accretion and Brown Dwarfs by gravitational collapse, but with no obvious method for determining how bodies such as CoRoT-27b have formed this is not particularly useful. It is possible that CoRoT-27b’s mass does in fact exceed 11 Jupiter masses, but it is certainly less than 13 Jupiter masses, and Parviainen et al. therefore conclude that while Brown Dwarf status cannot be completely ruled out, it is, at best, highly unlikely.

Of these HAT-P-20b and CoRoT-20b have been the subject of modelling attempts, with the most likely explanation for the density of both planets being a high concentration of heavy elements in their cores. It is also worth noting that all of these planets were found in orbit about F-type stars, with the exception of Kepler-75b, which also orbits a G-type star, and which is also the closest match to CoRoT-27b in its other parameters.

Two Hot Jupiters found to be in triple star systems.

The discovery of a large number of Hot Jupiter type planets (large gas giant planets orbiting very close to their parent stars) in recent years has challenged out... 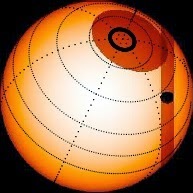 Kepler 63b; a giant planet in a polar orbit.


The atmosphere of Wasp 12b.

Wasp-12b is a super-Jovian Hot Jupiter type planet (a planet larger than Jupiter orbiting very close to its parent star) 871 light years from Earth in the constellation of Auriga. It orbits Wasp-12A, a G-type yellow dwarf star slightly bigger and hotter than our sun (1.35 × the...