A preserved Horse-foetus from the Middle Eocene Messel Shale.

Mammals have dominated almost all terrestrial ecosystems for the last 65 million years, however fossil Mammals, while not uncommon, are generally somewhat fragmentary, typically consisting of bone fragments and teeth, with larger more intact skeletons forming less than 2% of all know Mammal remains, and the preservation of other tissues even rarer. One location that does frequently produce more intact Mammal specimens is the early Middle Eocene Messel Shale of southern Germany, where a large number of Mammal specimens show exceptional preservation. Among the many remarkable fossils from the Messel Shale have been found a large number of specimens of the early Horse, Eurohippus messelensis, including a total of thirteen described examples of female Horses with preserved foetuses within their body cavities. 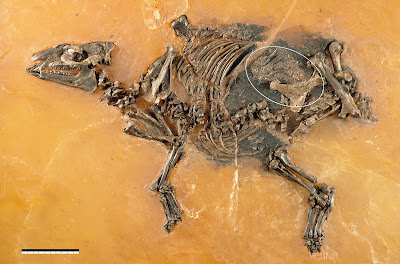 Skeleton of a mare of Eurohippus messelensis with foetus (white ellipse). The specimen was discovered and excavated by a team of the Senckenberg Research Institute Frankfurt at the Grube Messel, shoulder height ca. 30 cm, scale = 10 cm. Sven Tränkner in Franzen et al. (2015).

The new specimen is about 2 million years older than any previously described example, but is nevertheless considered to be the best preserved. It comprises a partially disarticulated post-cranial skeleton and crushed and disarticulated cranium, encased within what appears to be the preserved uterus of the adult, only the second such specimen to preserve traces of the adult reproductive tract as well as the more obvious bones of the foetus. 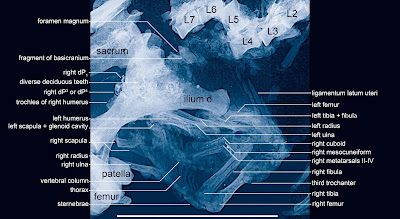 The foetus analyzed in detail by high-resolution micro-x-ray. Bones of the mare are indicated by black lettering, bones and teeth of the foetus by white lettering. L2-7 = lumbar vertebrae 2–7 of the mare. Scale = 10 cm. Jens Lorenz Franzen & Jörg Habersetzer in Franzen et al. (2015).

The reproductive biology of extinct animals is notoriously hard to interpret. In Mammals length of gestation is more closely tied to size than to phylogeny, however this is still only a rough guide, for example modern Horses carry their foals for about eleven months, compared to about nine months for Cows, which are approximately the same size. The modern Blue Duiker, Philantomba monticola, a small Antelope from the rainforests of Central and Southern Africa, is generally considered an approximate ecological equivalent for Eurohippus messelensis, being approximately the same size and living in a similar environment, and typically carry their young for between 201 and 213 days, giving birth to one offspring per year. The high proportion of pregnant female Eurohippus messelensis recovered from the Messel Shale suggests a similar lifestyle, with females pregnant for much of the time, but only carrying one foal per year. 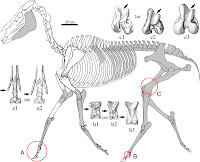 What a 4.6 million-year-old Three Toed Horse can tell us about the climate of Mid Pliocene Tibet.
The Indian Plate has been pushing into the Eurasian Plate from the south for about 55 million years, creating uplift in the Tibetan Plateau and Himalayas in the process. This has had a profound effect on the...