On 27 September 2015 volcanologists from the Icelandic Meteorological Office noticed a drop in the level of ice above a subglacial lake in the Grímsvötn caldera (a lake beneath the Vatnajökull ice-cap kept liquid by heat rising from the magma chamber beneath the volcano). On 29 September a monitoring station on the Skaftá River at Sveinstindur, 28 km downstream of the margin of the Vatnajökull ice-cap from which the river originates, detected a rise in the electrical conductivity of the river water, indicative of mineral ions present in the water, which is most likely explained by discharge from the mineral rich subglacial lake.

By 1 October the ice above the lake had subsided by 66 m, and the River Skaftá was discharging water at a rate of 1300 cubic meters per second at Sveinstindur, and 400 cubic meters per second at Skaftárdalur (further downstream), with visible ice fragments in the water. An investigation at the ice cap front revealed larger blocks of ice, 3-5 m in height and up to 10 m in length, deposited close to outflow points on the glacier, as well as a number of new outpourings from the ice at locations where these had not previously been recorded. The Icelandic Meteorological Office issued a warning to the public to keep away from the river, due to the risk of toxic hydrogen sulfide fumes. 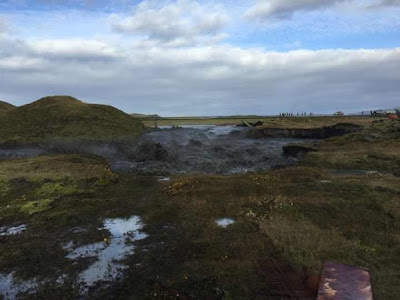 On 2 October the outflow at Sveinstindur was recorded as 2100 cubic meters per second, the highest measurement ever taken there, however this is known to be an under-estimate of the true rate of flow, as the river had overtopped the measured section of the watercourse and was visibly flowing outside the measured area. At Eldvatn near Ásar the peak outflow was measured as 2200 cubic meters per second at 1.00 pm local time. The high waters are reported to have damaged a bridge at Eldvatn, which was forced to remain shut until 5 October. 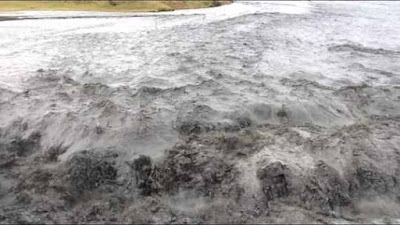 Grímsvötn is one of Iceland's most active volcanoes, and such flood outbursts, triggered by warming of the subglacial lake by magma rising into chambers beneath the caldera, can be an indicator of forthcoming eruptions. However such eruptions do not automatically follow after flood events, which happen on average every two years. 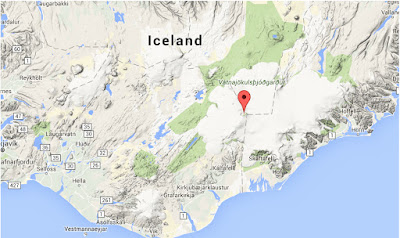 Iceland lies directly upon the Mid-Atlantic Ridge, a chain of (mostly) submerged volcanoes running the length of the Atlantic Ocean along which the ocean is splitting apart, with new material forming at the fringes of the North American and European Plates beneath the sea (or, in Iceland, above it). The Atlantic is spreading at an average rate of 25 mm per year, with new seafloor being produced along the rift volcanically, i.e. by basaltic magma erupting from below. The ridge itself takes the form of a chain of volcanic mountains running the length of the ocean, fed by the upwelling of magma beneath the diverging plates. In places this produces volcanic activity above the waves, in the Azores, on Iceland and on Jan Mayen Island. 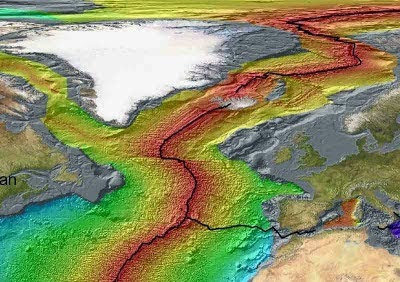 he passage of the Mid-Atlantic Ridge beneath Iceland. NOAA National Geophysical Data Center.

Sulphur Dioxide emissions from the 2014-15 Holuhraun Lava Field Eruption.
In mid-August 2014 seismic monitoring stations in Iceland began to record small Earth-tremors beneath the...