Landslide deisplaces about 150 000 tonnes of debris in Glacier Bay in southeast Alaska.

About 150 000 tonnes of debris are believed to have been displaced following a landslide onto Lamplugh Glacier in Glacier Bay in southeast Alaska on Tuesday 28 June 2016. Nobody directly observed the event, however it was detected by the Alaska Earthquake Center as a Magnitude 2.9 event occurring slightly after 8.20 am local time. A flight over the area by Paul Swanson of the Mountain Flying Service revealed a rock exposure suggesting about 1200 m of mountainside had collapsed. 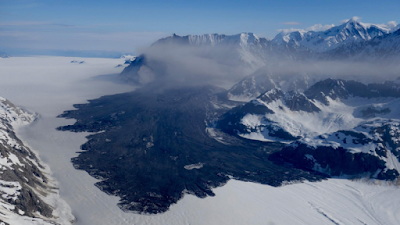 Without access to the site determining the cause of the event is not likely to be possible, and the cause of very large landslides and avalanches is often very difficult to determine even with close inspection. Such events are generally caused by the sudden release of a source of tectonic stress that has built up over a long period of time, with the actual trigger often being a very small event, the traces of which are typically wiped out by a large landslide.

Eruption on Mount Pavlof causes severe disruption to flights over Alaska.                  Mount Pavlof, a 2.5 km high stratovolcano (cone-shaped volcano made up of layers of ash and lava) on the Alskan Peninsula, underwent a significant...