The United States Geological Survey recorded a Magnitude 5.3 Earthquake at a depth of 10 km, in northeastern Guanacaste Province in northwest Costa Rica slightly before 7.00 pm local time on Saturday 2 June 2016 (slightly before 2.00 am on Sunday 3 June, GMT). There are no reports of any damage or casualties associated with this event, but it was felt across much of northern Costa Rica.

Costa Rica lies on the southern margin of the Caribbean Plate; to the south of the country the Cocos Plate, which underlies part of the eastern Pacific Ocean) is being subducted under the Middle American Trench, passing under Central America as it sinks into the Earth's interior. This is not a smooth process, and the plates often stick together until the pressure builds up enough to force them to shift suddenly, causing Earthquakes. As the Cocos Plate sinks deeper if is partially melted by the friction and the heat of the Earth's interior. Some of the melted material then rises up through the overlying Caribbean Plate, fueling the volcanoes of Central America. 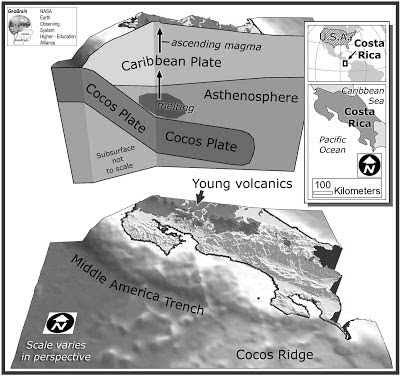 Diagram showing the passage of the Cocos Plate beneath Costa Rica (not to scale). Carleton College.
Witness accounts of Earthquakes can help geologists to understand these events, and the structures that cause them. The international non-profit organization Earthquake Report is interested in hearing from people who may have felt this event; if you felt this quake then you can report it to Earthquake Report here.
See also...