Photogrammetry as a tool in Morphometric Analysis.

Morphometric analysis is a tool used by palaeontologists, archaeologists, anthropologists and forensic pathologists to analyse and compare specimens. It relies on taking numerous measurements of an object such as a bone or shell, and comparing both these measurements and ratios between measurements to those obtained from other specimens in order to establish relationships between them. Traditionally these measurements have been obtained using tape measures and callipers, but modern scientists often use more sophisticated tools such as structured light scanners, which are capable of building highly detailed three dimensional models of specimens. Photogrammmetry has been used as a tool in landscape analysis since the mid nineteenth century. It relies on taking overlapping images of a landscape, from a number of different vantages, in order to help cartographers and geomorphologists build up a three dimensional model of the landscape. The advent of digital photography has led to a far wider use of photogrammetry in the archaeology and other fields in the past two decades, with it becoming regularly used to build models of archaeological sites or even individual buildings. Recently some scientists have begun using photogrammetry to build models of smaller items, including archaeological artefacts and Human remains.

In a paper published in the Journal of Archaeological Science: Reports on 18 July 2016 a team of scientists led by Allowen Evin of the Institutdes Sciences de l'Evolution at Université de Montpellier, the Department of Archaeology at the University of Aberdeen, and the Department of Archaeology, Classics and Egyptology at the Universityof Liverpool, describe a process by which three dimensional computer models were constructed using digital photographs, and the results compared to the results of a morphometric model made to by structured light analysis.

Evin et al. examined a series of five modern Wolf skulls from the collection of the Muséum Nationald'Histoire Naturelle in Paris, as part of a study into morphometric changes to the cranium during the domestication of Dogs. In order to do this they created two models, one using a Breuckmann StereoScan structured light scanner and the other a model constructed from a series of photographs taken with a an 8 mega-pixel digital single-lens reflex (DSLR) Canon EOS 30D camera, mounted with a CanonEF 24–105mmf/4 L IS USM lens.

In order to take the photographs the specimens were placed on a rigid cardboard sheet with a calibrated referential pattern, and photograped from three different elevations (approximately 0°, 15° and 40°) using a tripod mounted camera, which was moved around the specimen taking images at 10° intervals (i.e. 36 sets of three images in a circle). This was then repeated with the skull the other way up, to give a model of the complete specimen. These images were then turned into a three dimensional model using a VisualSFM software package. 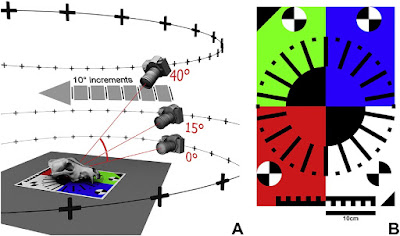 (A) Schematic representation of the set-up and camera positions used for the acquisition of the photographs. (B) Fixed dimensions reference pattern used to scale the models and enhance the performance of key-points detection/matching and camera calibration algorithms. Evin et al. (2016).

The photogrammatic model was then compared to the model made using the Breuckmann StereoScan structured light scanner (which rotates the specimens on its own automated turntable, creating a model using its own Optocat software package) using a computed mesh-to-mesh deviation map to compare the topology of the two models. This found that the two models matched to an average of 0.088 mm, with the only significant differences occurring within the nasal cavity and occipital foramen, areas which are generally considered extremely difficult to measure accurately, and which are not usually included in morphometric analyses. 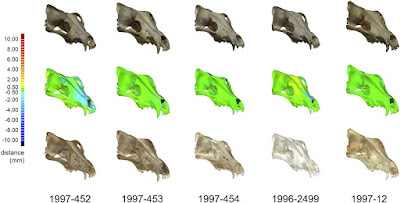 
However since the Breuckmann scanner is not portable and is reliant on specimens being brought to it, Evin et al. felt that on the whole the advantages of the camera outweighed those of the scanner, as it could potentially be used in situations where specimens could not be moved, was considerably cheaper and captured additional information about the colour and surface texture of the specimen that were not recovered with the scanner.