Identifying the clothes of Ötzi the Iceman.

In 1991 two German hikers in the Ötztal Alps of the South Tyrol Region of Italy discovered a Human body partially exposed on the surface of a glacier. Careful examination of this body revealed it to be, not as originally thought a modern corpse, but the mummified remains of a 5300-year-old Chalcolithic (Copper Age) hunter, the oldest mummified remains ever discovered in Europe. The mummy, dubbed Ötzi the Iceman, became an overnight sensation, and has been the subject of numerous studies, due to the unique insight he offers into the lives of Chalcolithic Europeans. 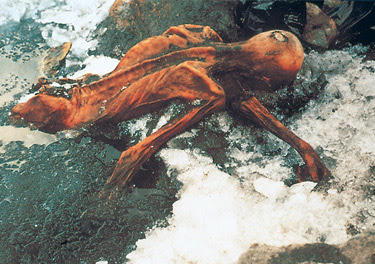 Ötzi the Iceman as he was originally discovered. South Tyrol Museum of Archaeology.

As well as the body of Ötzi himself, the site yielded numerous items of personal effects, the clothes worn, and goods carried by, Ötzi at the time of his death. One area that has interested scientists since the time of the discovery has been the animals from which the Ötzi's cloths were made. A variety of approaches have been tried in trying to solve this puzzle, including DNA analysis, proteomic analyses (analyses of proteins) and study of the microstructure of the leather, but all have been thwarted by the advanced state of decomposition of the material.

Mitochondrial DNA (mtDNA) is found in the mitochondria, organelles outside the cell nucleus. It is passed directly from mother to child without being sexually recombined each generation, enabling precise estimations of when individuals shared common ancestors, at least through the female line. Importantly, for the purposes of this study, mtDNA comes in much shorter packages than chromosomal DNA (it contains the code for making and operating the mitochondria only, not that for the whole body), and there is much more of it, since each mitochondria has its own DNA and there are typically 1000-2000 mitochondria in each cell, making it much more likely that enough mtDNA will survive for useful analysis. 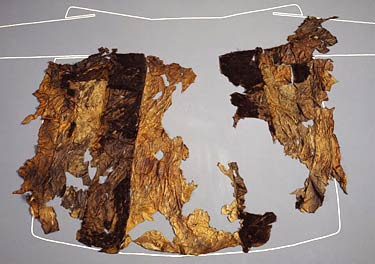 The remains of Ötzi's coat, made from pieces of different skins. South Tyrol Museum of Archaeology.

At first sight the number of different skins, and the fact that these skins came from different animals, in the coat appears to suggest that clothing was assembled in a haphazard way from whatever materials were at hand. However making such a garment from different cuts of leather or cloth would not be unusual today. The fact that Ötzi's leggings were made out of Goatskin is illuminating, since a similar pair of leggings from a 4500-year-old Chalcolithic site in Switzerland were also made of Goatskin, suggesting that people were consistently using the same material to make the same garments, implying that the skins were being actively chosen for properties that made them suitable for certain garments. 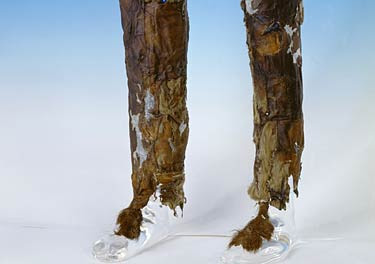 Ötzi's leggings were made from several different peieces of skin, although mtDNA was obtained from only one fragment. South Tyrol Museum of Archaeology.

The Sheep and Goat skins used to make Ötzi's clothing, as well as the Cow leather of his shoelace all appear to have come from domestic animals, but the Deerskin of the quiver and Bearskin of the hat were almost certainly from wild animals, indicating that the Chalcolithic Alpine people were utilizing material from both sources. Interestingly an earlier study had previously revealed that Ötzi's stomach contents included meat from a Red Deer, as well as identifying several hairs found on Ötzi's body as also having come from Red Deer, indicating that he was able to utilize at least two Deer species. 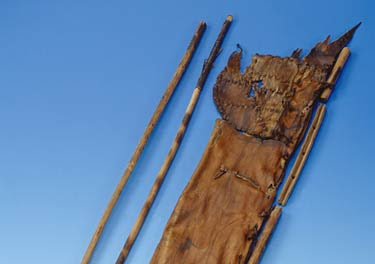 Ötzi's quiver, made from the skin of a Roe Deer. South Tyrol Museum of Archaeology. 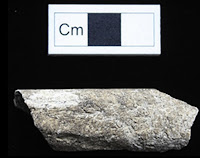 Determining the diets of Late Mesolithic Humans at Cnoc Coig, Scotland.                   In recent years isotopic and molecular analysis methods have transformed archaeology, enabling modern archaeologists to study the diets of and relationships between ancient peoples in a way that would have been unthinkable a few decades ago... 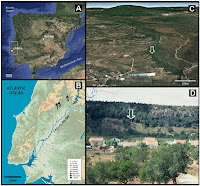 The first dairy farmers in Finland.                  Dairy farming (keeping Mammals in order to consume their milk or products derived from it) spread through Europe as part of the ‘Neolithic Package’ of technologies, which originated in the Middle East about 11 000 years ago. Despite this development...
Follow Sciency Thoughts on Facebook.