The United States Geological Survey recorded a Magnitude 4.8 Earthquake at a depth of 10 km in southern Teton County in northwest Wyoming, slightly after 2.45 pm local time (slightly after 8.45 pm GMT) on Saturday 27 August 2016. There are no reports of any damage or casualties associated with this event, though people have reported feeling it across much of northwest Wyoming and southeast Idaho.

The approximate location of the 27 August 2016 Teton County Earthquake. Google.

Wyoming typically suffers two or three moderate sized Earthquakes per year, though quakes large enough to cause significant damage are rare. The mountainous areas of the west of the state have a number of deeply buried faults where occasional movement occurs. This can be caused by movement around the Yellowstone Magma Chamber in the northeast of the state, an area that suffers more-or-less constant small tremors due to the movement of magma beneath the surface, but which seldom experiences larger quakes. The constant small movements around Yellowstone can lead to stress building up in rocks further away, leading to Earthquakes as the rocks release the strain by readjusting their positions, which can affect Wyoming as well as neighbouring Idaho and Montana. The same faults also suffer stress due to more distant rock movements, notably on the subduction zone on the American west coast. 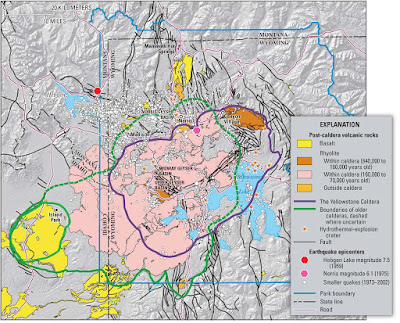 Yellowstone is home to one of the world’s largest active volcanic systems. Cataclysmic eruptions in the past few million years created huge volcanic depressions called “calderas.” The youngest, the Yellowstone Caldera, was formed 640,000 years ago. Since then, about 80 eruptions of rhyolite (thick, sticky lava) and basalt (more-fluid lava) have occurred. The caldera’s interior is largely covered by rhyolites, most erupted in the past 160,000 years. Large hydrothermal (steam)-explosion craters formed in the past 14,000 years are located near Yellowstone Lake and in major geyser basins. Recent earthquakes (1973 to 2002) were concentrated between Hebgen Lake and the Norris Geyser Basin and along faults. USGS.