Saturn's moon Titan is known to have three small seas in its North Polar Region, Kraken, Ligeia, and Punga Mare, in which the Cassini Space Probe has been able to confirm the presence of liquid hydrocarbons by using synthetic aperture radar which produced a reflection from both the surface and floor of the ocean. Much of the surface of Titan is also known to be covered by an extensive network of channels and canyons that resemble similar structures carved by water on Earth, though the Cassini Probe has been unable to detect any liquid in these narrower structures using synthetic aperture radar.

The northern polar area of Titan and Vid Flumina drainage basin. (left) On top of the image, the Ligeia Mare; in the lower right the North Kraken Mare; the two seas are connected each other by a labyrinth of channels. On the left, near the North pole, the Punga Mare. Red arrows indicate the position of the two flumina significant for this work. At the end of its mission (15 September 2017) the Cassini RADAR in its imaging mode (SAR+ HiSAR) will have covered a total area of 67% of the surface of Titan. (right) Highlighted in yellow are the half-power altimetric footprints within the Vid Flumina drainage basin and the Xanthus Flumen course for which specular reflections occurred. At 1400 km of spacecraft altitude, the Cassini antenna 0.35° central beam produces footprints of about 8.5 km in diameter (diameter of yellow circles). It is easy to note that we do not have a specular reflection at each intersection of the altimetric track with the channels. This is mainly due to the very limited area covered by the Fresnel zone (~250 m) and to the 0.6 s of the Burst Repetition Interval of the radar. The result is that in some cases the Fresnel zone just missed the strong reflection from the liquid coming from nadiral direction. Poggiali et al. (2016).

The Ku band (λ = 2.17 cm) radar altimeter nadir observation has previously been used to detect liquids on Earth, when the probe flew by Earth in 1999, and was able to detect the dammed Paranaiba River in Brazil. The method works by detecting backscatter - the level of smoothness of a surface - which can indicate whether it is a liquid or a solid. The floors of canyons around the equatorial region of Titan were found to have relatively radar bright surfaces, which is likely to indicate dry river beds or similar, with course gravels or cobble-sized rocks. In contrast two areas studied in the North Polar Region, the Vid Flumina and Xanthus Flumen, did not appear to have a refracting bottom to its canyons at all, but instead a smooth surface similar to the nearby Ligeia Mare. 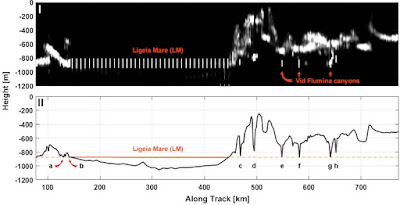 Radargram and results. ( I) Each column of the radargram represents an incoherently averaged echo received during the T91 flyby from the region hosting Ligeia Mare and channels. Pixel intensity indicates the received backscatter as function of time. The surface of Ligeia Mare is dotted because of the peculiar design of the T91 flyby, which consisted in an alternated acquisition of echoes from a nadir and a slight off-nadir antenna pointing geometry. Arrows indicate specular reflections from the main trunk (feature g) of Vid Flumina and from two of its tributary branches (features e and f). (middle, II) Titan’s heights given by the Cassini Processing of Altimetric Data (CPAD) are reported as relative to a 2575 km sphere, centered at Titan’s center of mass. Observations featuring specular reflections from the liquid are indicated with progressive letters from north to south; the position of Ligeia Mare can be recognized by the extremely flat region extending from about 140 to 440 km along track; Vid Flumina hydrographic basin interests an area ranging from about 440 to 680 km along track. The altimetry profile shown here is useful to give an idea of the geomorphologic shape of the area and highlines the relative flatness of the surface, whose greatest elevation difference between higher and lower points is about 630 m. This profile has been produced by means of a centroid tracker, which is a leading edge estimator based on the Offset Centre of Gravity algorithm. In particular, we used the I moment tracker, which sets the altimetric echo two-way travel time by computing the centroid of the observed power distribution, as described by the first moment of the echo with respect to time. For all the echoes relative to channels, the centroid has been computed only on that portion of the signal reflected from the liquid. Poggiali et al. (2016).

Both of these geographical features had canyons with smooth bottoms, which had elevations apparently the same as that of the nearby Ligeia Mare, despite considerable differences in the topology of the surrounding area. This appears to suggest the presence of a liquid in the bottom of the channels at the same level as that in the sea. The studied area of the Xanthus Flumen is close to the Ligeia Mare, flowing into Puget Sinus, an arm of the northern part of the sea, but the studies areas of the Vid Flumina are some distance away. This for of structure, with inciced channels running a considerable distance from the sea but with a similar water level is more consistant with a fjord structure, in which a pre-existing channel eroded by past activity is flooded by an arm of the sea, than with a river, which flows down to the sea from a source at a higher altitude (although some smaller channels around the Vid Flumina did appear to have a liquid surface at a higher level, possibly indicating flow into the lower channels and then the sea).

Methane storms as a possible cause of Titan’s equatorial dune fields.                  Observations by the Cassini Space Probe have revealed vast dune fields, similar to those observed in the great sandy deserts of...

Cassini Probe finds 400 km river on Titan.
NASA scientists have released an image of a 400 km long river on Saturn's moon Titan, imaged by the Cassini Space Probe during a flyby on 26 September 2012. The river meanders for some...

The Cassini Space Probe was launched on 15 October 1997 from Cape Canaveral Air Force Station and entered orbit around Saturn on 30 June...