Oesia disjuncta was originally described from the Walcott Quarry site by Charles Walcott in 1911, and has been variously described as an Annelid Worm, an Appendicularian Tunicate (free-swimming Tadpole-like animals related to Sea Squirts) or a Chaetognath (Arrow Worm). However none of the Walcott Quarry specimens is well preserved and the identity of the species has remained a mystery.

Nanglu et al. describe the discovery of 45 new specimens of Oesia disjuncta from the Marble Canyon locality, plus another six from Raymond Quarry (close to the original Walcott Quarry site). These enable a far better inspection of the anatomy of Oesia disjuncta than was previously possible, enabling a revision of the taxonomic affinities of this fossil. 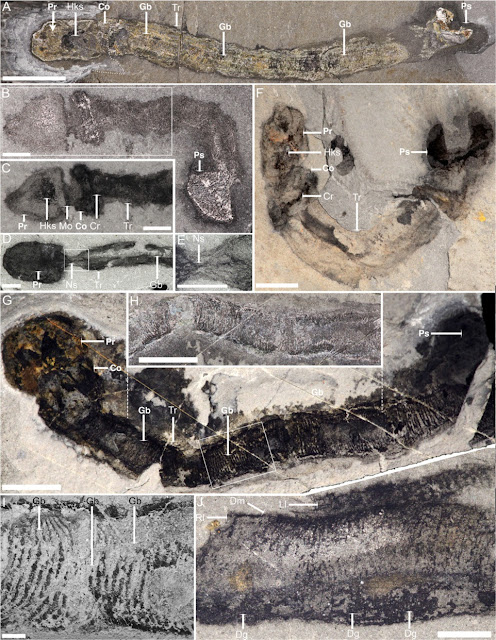 Oesia disjuncta has a fairly typical Hemichordate bodyplan, with a distinct proboscis, collar and trunk, but has a bilobed structure behind the pharynx, rather than an elongate gut. The specimens range from 2.4 mm to 120 mm in length, with an average of 53 mm.

Many of the Oesia disjuncta specimens were found in association with another fossil, Margaretia dorus, which has previously been thought likely to have been a Green Macroalga (Seaweed), and which is known not just from the Burgess Shale deposits in Canada but also from the contemporary Spence and Wheeler Shales of Utah. 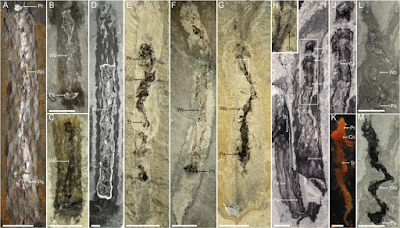 Margaretia dorus tubes and associations with Oesia disjuncta from the Burgess Shale. Specimens in (a) and (d) come from the Raymond Quarry; all other specimens come from Marble Canyon. (a–h) Taphonomic gradient of the Worm inside its tube from generally poorly preserved (a) to better preserved (h); the tubes tend to preserve more poorly at Marble Canyon relative to tubes from the Raymond Quarry showing similar amounts of decay of the Worm. (a) Margaretia dorus with Worm preserved as a dark/reflective band along the central axis of the tube (USNM 83922). (b), (c) Small fragments of tubes containing worms showing only few recognisable features (b): (ROM 63955), (c): (ROM 63956). (d) Part of a tube excavated to reveal a poorly preserved Worm inside (ROM 63715). (e) Tripartite body plan recognisable but Worm heavily decayed (ROM 63953). (f) Clear posterior structure but indistinct proboscis and trunk (ROM 63957). (g) Poorly preserved trunk and faded tube (ROM 63952). (h) Close-up of framed area in g on counterpart, showing gill bars readily visible. (i), (j) Specimen showing clear tripartite body plan and evidence of gill bars (ROM 63715). (k) The extant Acorn Worm Saccoglossus pusillus after 48 hours of decay at 25 °C showing dissociated parts, although the tripartite body plan is still recognisable. (l), (m) Oesia disjuncta outside of its tube, showing extreme signs of decay comparable with (k). Direct light (l) is contrasted with polarised light (m) to reveal different aspects of fossil morphology (ROM 63954). The ectoderm is fraying off, the proboscis is indistinct and the trunk has lost turgidity. Most Worms preserved inside their tubes show a similar level of preservation. Direct light images: (a), (b), (d), (l); polarized light images: (c), (e)–(i), (m). Bi: node of bifurcation, Fe: fibrous elements, Wo: Worm, other acronyms see keys to above images. Scale bars: (a)–(c), (e)–(g), (k)–(m) = 10mm, (d), (i) = 5 mm. Nanglu et al. (2016).

Nanglu et al. note that Margaretia dorus does not appear to resemble any other Cambrian (or extant) Green Macroalga, with a tubular structure and fibrous composition, together with an elaborate arrangement of pores, and interpret this as being a tubular structure, built and dwelt in by the Worms. 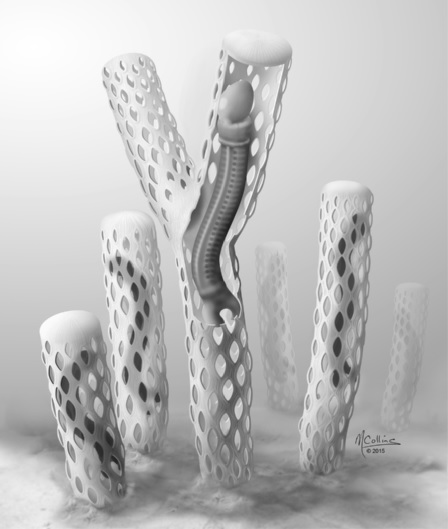 Life reconstruction with hypothetical closed terminal ends of the tubes — part of one tube partially removed to show a Worm. Marianne Collins in Nanglu et al. (2016).

However Nanglu et al. also note that many of the Oesia disjuncta specimens are not found in tubes, indeed many of those at Marble Canyon are found in groups on a single bedding plain in a way that suggests some sort of mass mortality event. They therefore suggest that the Worm was capable of leaving its tubes, either spending part of its natural life cycle outside the tube, or possibly abandoning its home as some sort of emergency response when threatened. 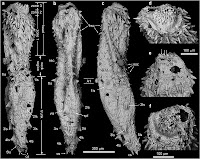 Yuganotheca elegans: An Early Cambrian Lophophorate Animal with affinities to Brachiopods and Phoronids.                   Lophophorates are animals which feed using a filte...
Follow Sciency Thoughts on Facebook.