Palaemonid Shrimps are one of the most numerous and diverse of the Decapod Shrimp groups. The family is split into two subfamilies, the free-living Palaemoninae, which are active carnivores found in almost all marine environments, and the Pontoniinae, which form a variety of associations with other invertebrates, living on Sponges, Cnidarians, Molluscs and Echinoderms as Cleaner Shrimps, parasites, or commensals.

In a paper published in the Raffles Bulletin of Zoology on 26 August 2016, Qi Kou and Xinzheng Li of the Institute of Oceanology of the Chinese Academy of Sciences, describe a new species of Palaemonid Shrimp from off the coast of Houhai Beach on Hainan Island.

The new species is paced in the genus Philarius, which contains a number of Coral-dwelling species, and given the specific name venustus, meaning elegant, in reference to the pale, hairless body of the Shrimp. The species is described from a single male specimen. pale in colour and 9.2 mm in length collected from an unidentified slender-branched Scleractinian Stony Coral of the genus Acropora found growing at a depth of 2-8 m. 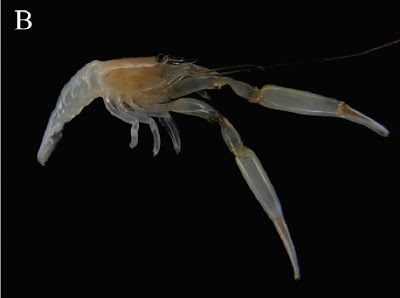 Ghost Shrimps from the Oligocene and Miocene of Central Europe.                       Ghost Shrimps (Callianassidae) are Decapod Crustaceans noted for the large, complex burrows they build. They excavate their burrow systems in intertidal or shallow subtidal waters in the tropics and... 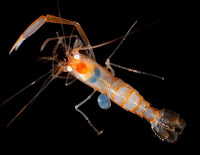