Understanding the ecological niche of the Neanderthals.

The Neanderthals were an early Human group living in Europe during the Late Pleistocene, from about 250 000 to about 40 000 years ago. They are considered by some palaeoanthropologists to have been a separate species of Humans, closely enough related to Modern Humans to have occasionally interbred with us, while others see them as a distinct group of Modern Humans adapted to living in Pleistocene environments that have now disappeared. The traditional view of Neanderthals is of a cold-adapted group, able to survive in harsh, Ice Age environments that Modern Humans could not tolerate, but unable to compete with Modern Humans in the milder climate of the Holocene. However an expanding number of Neanderthal finds and work upon these has painted a different picture, with the Neanderthals reaching their maximum range of expansion during the Last Interglacial Climatic Optimum, 125-119 000 years ago, when temperatures were on average 2°C warmer than today across Europe, and the last Neanderthals having lived around the Mediterranean Basin close to the Last Glacial Maximum, 40 000 years ago, at a time when Modern Humans, with more advanced textile manufacturing capabilities, were already moving into parts of Central Europe. 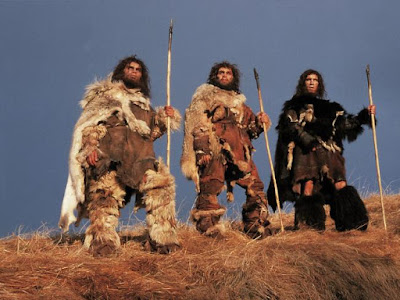 Neanderthals have traditionally been thought of as a cold-adapted Human group, but this may not be the case. Walking with Cavemen/BBC.


Benito et al. mapped the known distribution of Neanderthal sites in Europe and the Middle East against factors likely to have effected their distribution, notably maximum temperature of the warmest month, minimum temperature of the coldest month, annual precipitation, precipitation during the warmest quarter, topological variability and average slope. Neanderthal populations from Central Asia and Siberia were not included in this study as insufficient information on these was available.

Some previous studies have suggested that parts of Central Europe were covered by dense forests during the Last Interglacial Climatic Optimum, which would have excluded large game upon which Neanderthals were dependent, and therefore the Neanderthals themselves, from these areas. However more recent studies have suggested that these areas were covered not by a single homogenous dense forest, but by a more patchwork environment with forested and open areas, which would not have excluded big game, implying that if Neanderthals were absent from these areas it would have been for other reasons. Benito et al. observe that the addition of detailed mapping of vegetation in Europe during the Last Interglacial Climatic Optimum would have been useful, but that such information is not available at a sufficiently detailed level at the current time.

It has also been suggested that the biggest limiting factor for Neanderthals in Northern Europe would be a short growing season, which would have limited the available food for prey animals both large and small, thereby limiting the amount of food available to Neanderthals. At the other extreme Neanderthals could have been excluded from some more southerly areas by a warm dry climate, with low summer rainfall again limiting plant growth and available food for herbivorous animals, again limiting the Neanderthals by reducing their hunting opportunities. This latter theory has been undermined somewhat by the discovery of a large number of Neanderthal sites around the Mediterranean Basin, leading to suggestions that Neanderthals may have been able to cope with an absence of game animals in these regions by substituting seafood such as shelfish gathered on the shore.

Neanderthals were found to be able to tolerate a high temperature range, with a maximum average warmest month temperature of 38.4°C and an average minimum coldest month temperature of -19.3°C. Reasonably high rainfall levels also seemed to be important, with Neanderthals favouring areas with about 900 mm of rain per year and high summer rains. Neanderthals also favoured areas with high topological variability (on average 73.8%) and an average slope between 0.5 and 6.8°. In layman’s terms this means they needed a reasonably varied terrain, enabling foraging in a variety of habitats, and avoided both flatlands and mountainous regions. The absence of Neanderthals from mountain ranges such as the Alps and Pyrenees has been noted before, and it has been suggested that this may be due to the loss of archaeological remains by glacial scouring. However a number of recent finds of Pleistocene Cave Bears from sites in the Alps has suggested that such remains can survive here at least in caves, and Neanderthals are known to have taken advantage of such natural shelters just as Bears do. 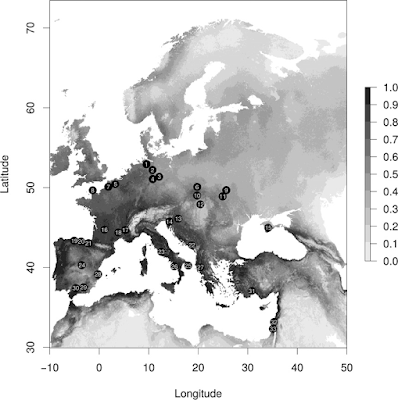 This model indicates that the optimum environment for Neanderthals was found in Southern Europe and the Mediterranean Basin, in central and southern France, Italian Peninsula, the Mediterranean islands, along the Atlantic coast of the Iberian Peninsula, the southern coast of the Black Sea and the Levantine coasts of the Mediterranean Sea. A less optimal environment was found in inland areas of Southern Europe and coastal areas further north, such as the continental areas of the Iberian Peninsula, British Isles, Dinaric Alps, Balkan Mountains, continental areas of Anatolia and the southern coasts of the Baltic Sea. Others areas, such as high-altitude regions of the Alps and Pyrenees, across the Scandinavian Shield, and the current Arabian Desert, were highly unsuitable for Neanderthal occupation. 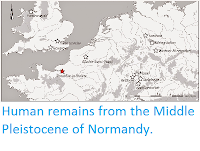