Snakes are one of the most successful groups of living vertebrates, with over 3000 living species found in all but the very coldest environments on Earth. Modern Snakes exhibit a wide range of habitat preferences, from totally marine species to species found entirely in the treetops, but it is thought that the earliest members of the group were either burrowers of swimmers, lifestyles which have led to limb-reduction and loss in a variety of other groups. By the beginning of the Late Cretaceous (about 100 million years ago) Snakes are known from all major land-masses, and are presumed to have been global in distribution. All of these Late Cretaceous Snakes appear to have been aquatic in nature, though this may have been because aquatic animals, which are more likely to be quickly buried by sediment, are more likely to enter the fossil record, rather than an indicator that all Snakes of the time were aquatic.

In a paper published in the journal Science Advances on 18 July 2018, a team of scientists led by Lida Xing of the State Key Laboratory of Biogeology and Environmental Geology and the School of the Earth Sciences and Resources at the China University of Geosciences, describe an embryonic-to-neonate Snake from Cretaceous Burmese Amber.

The new Snake is named Xiaophis myanmarensis, where 'Xiaophis' mean's 'Xiao's Snake', in honour of Xiao Jia, the amber specialist who donated the specimen to the Dexu Institute of Palaeontology (since 'Xiao' trnaslates as 'Dawn', the name could also be interpreted as 'Dawn's Snake'), and 'myanmarensis' means 'from Myanmar'. The specimen is an articulated postcranial skeleton, with 97 vertebrae, 87 of which have associated ribs, and the remaining 10 of which are interpreted to be caudal (from the tail). This very high number of vertebrae and ribs is only seen in a very limited range of Animals, notably Snakes, Amphisbaenians and Dibamids (both types of legless burrowing Lizards), and the structure of the vertebrae in Snakes is different from those of the other two groups. 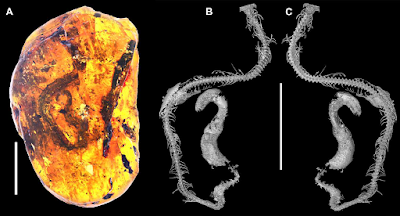 Xiaophis myanmarensis closely resembles neonatal specimens of a range of modern Snakes, suggesting that development in Snakes has changed little in the past 100 million years. The fact that the specimen was preserved in amber makes it highly unlikely that this was an aquatic Snake, and Xing et al. suggest that an interpretation as a tree-dwelling Snake is far more likely, which, if correct, would make Xiaophis myanmarensis the oldest known Snake from this important habitat for modern Snakes. This is particularly interesting as Myanmar is interpreted as having been part of an island chain connecting Laurasia (Eurasia plus North America) to Australia and colonised by island hoping species from both ends of the chain. This suggests that either tree-dwelling Snakes were capable of island-hoping by this time, or that Xiaophis myanmarensis evolved from an aquatic lineage into a tree-dwelling species on a fairly small island. 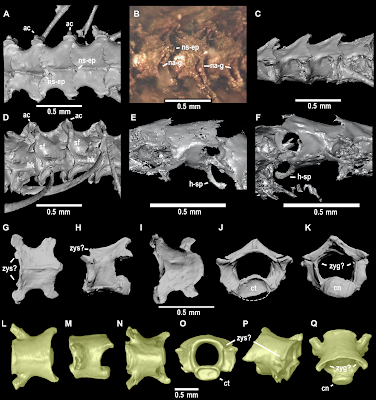 Xing et al. also describe a section of Snake skin from a second piece of Burmese Amber, interpreted as having come from the shed skin of a much larger animal. This is not assigned to a species, but is taken as evidence that adult as well as juvenile Snakes were dwelling in the trees of Cretaceous Myanmar. 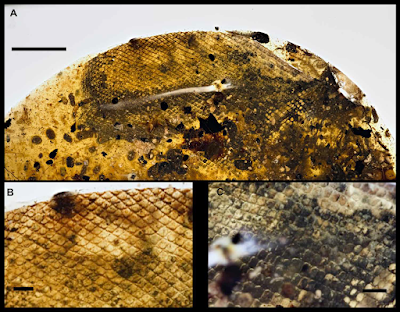 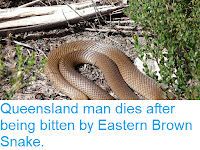 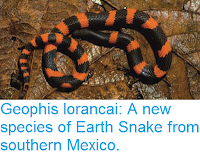