Ancestor of all modern Snakes more likely to have been a burrower than a swimmer.

Snakes are one of the most successful groups of living vertebrates, with over 3000 living species found in all but the very coldest environments on Earth. Modern snakes exhibit a wide range of habitat preferences, from totally marine species to species found entirely in the treetops, but it is thought that the earliest members of the group were either burrowers of swimmers, lifestyles which have led to limb-reduction and loss in a variety of other groups.


The most reliable way to assess the lifestyle of a modern Snake is to examine the trunk-to-tail ratio, i.e. the number of trunk and tail vertebrae it possesses. At first sight this would seem a useful tool to palaeontologists studying the origin of the group, as vertebrae are the most robust bones in the body of a Snake, with excellent potential to enter the fossil record. However in order for this analysis to be used all of the vertebrae of an individual snake have to be preserved, which is a very rare occurrence, making most known fossil Snakes useless for this purpose.

In a paper published in the journal Science Advances on 27 November 2015, Hongyu Yi of the School of Geosciences at the University of Edinburgh and the Divisionof Paleontology at the American Museum of Natural History and MarkNorell, also of the Division of Paleontology at the American Museum of Natural History, discuss the results of a study which examined the inner ear bones of Dinilysia patagonica, a Cretaceous fossil Snake thought to have been closely related to the last common ancestor of all living Snakes, though not actualy ancestral to such Snakes itself, as well as those of a variety of living Snakes, Lizards and Amphisbaenians (limbless Squamates which lost their limbs separately to the Snakes).


Ear bones are a potential good indicator of the habitat the medium in which an animal is living as solid ground, liquid water and gaseous air all reflect sound waves in different ways, so that in order to achieve good hearing (and most Snakes have very good hearing) the earbones of the Snake should reflect the environment in which it lives.

(A) Snake skulls in right lateral view, showing that the inner ear (orange) locates inside the braincase and opens to the stapes (blue) in the middle ear. Ear and skull models are not to scale. (B) Inner ear of Laticauda colubrina, an aquatic species. (C) Ptyas mucosa, terrestrial generalist (D) Xenopeltis unicolor, a burrowing species. Yi & Norell (2015).

The inner ear of Dinilysia patagonica was found to conform closely to the burrowing form with an enlarged and almost spherical vestibule, enlarged formamen ovale and slender semicircular cannals. This suggests that this species was extremely likely to have been a burrower, suggesting that this was the ancestral ecological preference for Snakes. A cladistic analysis of Snake evolution (computerised analysis of relationships within the group based entirely upon shared common features rather than assumed relationships) also suggested tha trait was ancestral within the Snakes, with the earliest derived groups allexclusively or predominantly burrowing and terrestrial or aquatic lifestyles arrising as specializations within several groups. This held true even when Mosasaurs, a group of Mesozoic Marine Reptiles thought to have been closely related to Snakes, were added into the matrix. 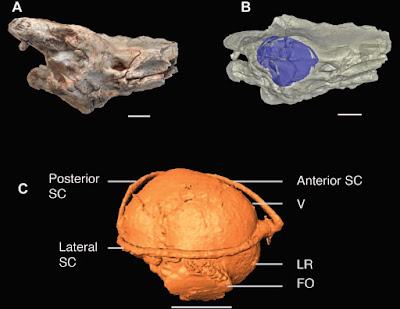 Subfossil Reptile remains from a garbage dump on Yoronjima Island.
Many small tropical and subtropical islands are thought to have impoverished faunas, due to extinctions of local animals caused by human activity, notably habitat modification and the introduction of exotic...

A fossil Snake from the Cretaceous of Brazil. Snakes are generally accepted to have appeared and diversified during the Mesozoic, though their fossil record is not extensive. This is due to their lightly mineralized, easily disarticulated skeletons, which...
Follow Sciency Thoughts on Facebook.