Typhoon Yutu kills at least one and causes widespread devastation in the Northern Mariana Islands.

The Northern Mariana Islands, a Commonwealth of the United States in the Pacific Ocean, has suffered severe damage to infrastructure after Typhoon Yutu swept across the two main islands of Saipan and Tinian on Wednesday 24 October 2018. The island of Saipan has reportedly lost all electricity and mains water supplies, but remains in telephone contact with the outside world, with one person reported dead. The islands of Tinian and Rota have not been contacted since the storm passed, and the extent of the damage there is unclear. 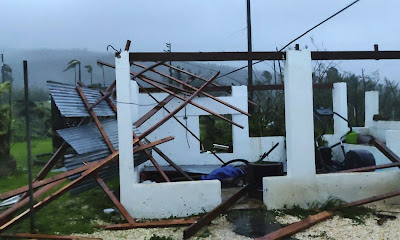 The remains of a house on Saipan Island, Northern Marianas, destroyed during the passage of Typhoon Yutu this week. Glen Hunter/AP.

The storm was a Category 5 Typhoon when it hit the islands, bringing with it sustained wind speeds (wind speeds maintained for a minute or more) in excess of 290 kilometres per hour. The storm is reported to have caused widespread flooding, with a large storm surge hitting the islands, and to have triggered a number of landslides. Landslides are a common problem after severe weather events, as excess pore water pressure can overcome cohesion in soil and sediments, allowing them to flow like liquids. Approximately 90% of all landslides are caused by heavy rainfall. The storm is currently sweeping towards the Philippines and Taiwan, where it is expected to cause further problems. 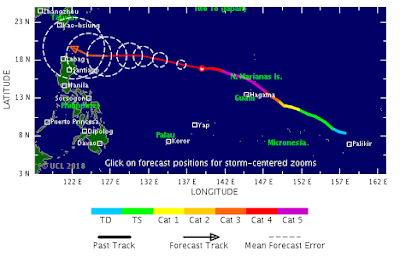 Tropical storms are caused by the warming effect of the Sun over tropical seas. As the air warms it expands, causing a drop in air pressure, and rises, causing air from outside the area to rush in to replace it. If this happens over a sufficiently wide area then the inrushing winds will be affected by centrifugal forces caused by the Earth's rotation (the Coriolis effect). This means that winds will be deflected clockwise in the northern hemisphere and anti-clockwise in the southern hemisphere, eventually creating a large, rotating Tropical Storm. They have different names in different parts of the world, with those in the north Pacific being referred to as typhoons. 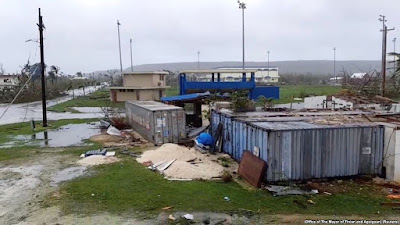 Damage on the island of Tainan in the Northern Marianas before contact with the island was lost. Office of the Mayor of Tainan and Aguiguan/Reuters. 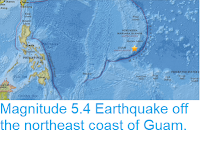 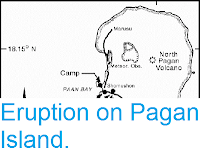