Ediacaran trace fossils suggest that scavenging predated predation in the evolution of animals.

Predation is a highly efficient way for animals to obtain nutrition, and both the seeking of prey and the avoidance of predators are thought to have been major drivers of animal evolution from the Cambrian Explosion onwards. However, several adaptations have to be in place before such a diet can be adopted, including a digestive system capable of processing animals as food and a sensory system sophisticated enough to detect prey. Unicellular Eukaryotes may have begun feeding on one another around two billion years ago, but the first direct fossil evidence of this dates from the 780-740 million year old (Tonian) Chaur Group of Arizona and Utah, and the first evidence of predation by macroscopic animals comes from the very end of the Ediacaran, when boreholes have been found in the mineralised tubes of Cloudinia in Shaanxi Province, China.

In a paper published in the journal Emerging Topics in Life Sciences on 28 September 2018, James Gehling of the South Australian Museum and Sprigg Geobiology Centre at the University of Adelaide and Mary Droser of the Department of Earth Sciences at the University of California, Riverside, describe a series of trace fossils from the Ediacara Member of the Adelaide Rift Complex, which they interpret as evidence of scavenging behaviour by the trace-maker.

The Adelaide Rift Complex is a succession of sedimentary and volcanic rocks of Cryogenian to Cambrian age which outcrop across the Flinders and Mount Lofty ranges of South Australia. Within this group, the Ediacara Member of the Rawsley Quartzite Formation produces numerous Ediacaran fossils (which take their name from this strata), laid down in a deep, outer shelf environment, below the influence surface waves, but where they were regularly buried by turbidites, submarine landslips likely to have been caused by storms further up the slope.

Gehling and Droser record frequent examples of the trace fossil Helminthoidichnites, a meandering furrow1-3 mm wide, found both as an indentation on the top of layers of thins sandstone beds, and as in negative relief on the bottom of higher layers. These deposits also include body fossils of Ediacaran organisms such as Dickinsonia, Beltanelliformis, Aspidella, and Funisia. The usual path of the Helminthoidichnites furrows is aparently random, but where they come close to a macrofossil they frequently turn towards this, crossing the border of the external boundaries and internal structures of these megascopic organisms. 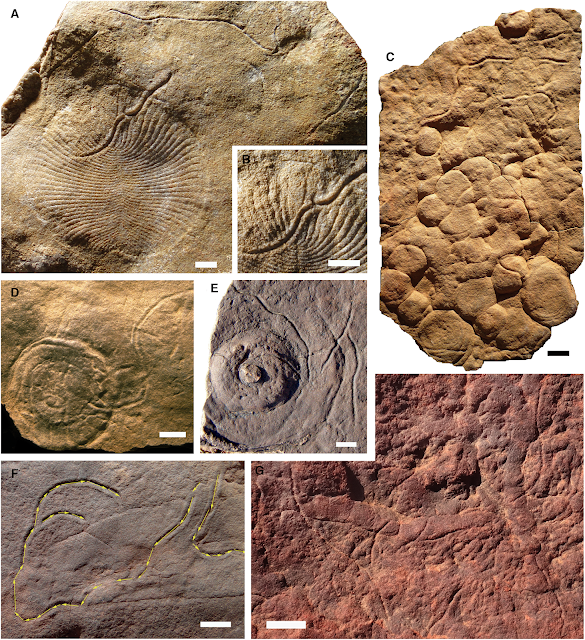 Gehling and Droser interpret this as evidence of a unknown trace making animal which normally inhabited algal mats at the sediment-water interface, but capable of burrowing if these mats were overlain by thin layer of sand (probably not more than about 15 mm). Where these trace-makers encountered buried corpses of soft-bodied Ediacaran macro-organisms, they were apparently capable of recognising them as a rich source of nutrition and responding accordingly, 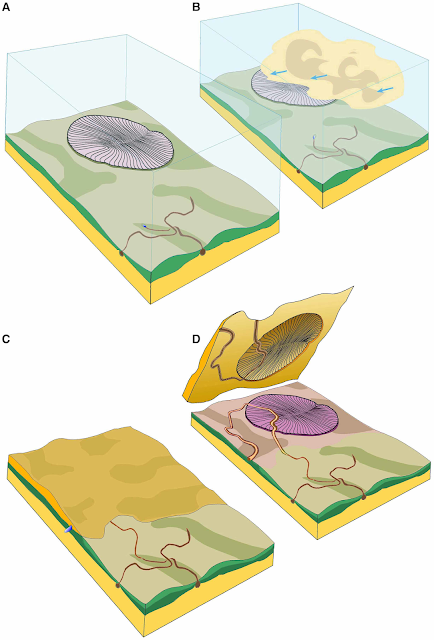 (A) Dickinsonia costata on microbial mat, burrowed by small scavenging metazoans leaving bed top grooves and levees in sand below the mat. Only mat–sand interface traces are preserved; intra-mat burrowing is not preserved. (B) Partial smothering of seafloor assemblage below fair-weather wave-base by storm-deposited sand transported from the shore face. (C) A small bilaterian scavenger penetrates the interface between the burial sands and the partially smothered, feeding on the mat and decaying organisms buried below a thin (less than15 mm) veneer of sand, and avoiding the lower levels of the mat and thicker sand cover where the ambient oxygen was too low for vital activity. (D) Bed-sole external mold of mat-mediated TOS and groove traces made where a scavenging organism moved between the mat and smothering sand, cutting through decaying bodies. Gehling & Droser (2018).

The nature of the trace-maker is unclear, as no known fossil from the Ediacara Member is a likely candidate. Gehling and Droser note that modern marine algal mats typically have oxygen levels higher than the surrounding environment, and that such an environment in the Ediacaran might have supported more active animals with higher energy requirements than was possible elsewhere, possibly leading to the evolution of organisms that would play an important role in the later Cambrian Explosion. 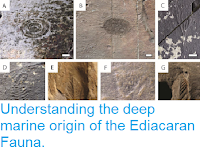 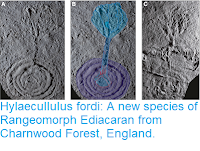 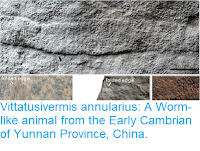 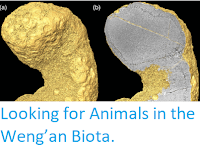 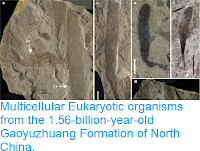 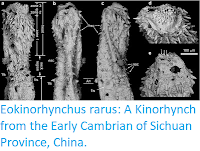