Mesophotic Coral Reefs from the Middle Silurian of Gotland, Sweden.

The Middle Silurian Period saw a great expansion of reef ecosystems, which spread across a far higher proportion of the seafloor than is the case today, and reached much higher latitudes (i.e. extended further north and south). These reefs, were largely constructed by three distinct types of organisms, Tabulate and Rugose Corals, and Stromatophorids, a type of calcareous Sponge, and persisted until the Frasnian-Famennian Extinction in the Late Devonian, when a sudden increase in sea temperatures, followed by an equally sudden drop, is thought to have led to their demise. It is thought that, as with modern Corals, the success of these ancient Corals was due to the acquisition of symbiotic Algae, zooxanthellae, which enabled them to gain energy through photosynthesis and thereby survive in environments with very low nutrient levels. Exactly when the first Corals gained zooxanthellae is hard to determine. It has been suggested that the development of such an association might have been one of the causes of the Great Ordovician Biodiversification Event (during which many dominant Cambrian animal groups were replaced by groups which persisted to the end of the Permian or beyond), or that it immediately preceded the development of the Silurian reefs, though both theories would require that the Silurian reefs were actually built by photosynthetic organisms.

In a paper published in the journal Coral Reefs on 26 December 2018, Mikołaj Zapalski of the Faculty of Geology at the University of Warsaw, and Błazej Berkowski of the Institute of Geology at Adam Mickiewicz University, describe a Coral Reef from the Silurian Visby Beds of Gotland Island, Sweden, and discuss the implications of this for photosynthesis in Silurian Corals.

The Visby Beds are split into two units, the Lower Visby Beds, which are interpreted at having been laid down below the photic zone (i.e. too deep for photosynthesis to have occurred), and comprise heavily bioturbated limestones and marls, and the Upper Visby Beds, which are interpreted as having been laid down in a shallower environment, with erosional surfaces and ripple marks, and a range of fossils including Algae, Tabulate Corals, solitary Rugose Corals, Trilobites, Brachiopods and Bryozoans. The boundary between these units is marked by a layer of large, flat, Tabulate Corals. 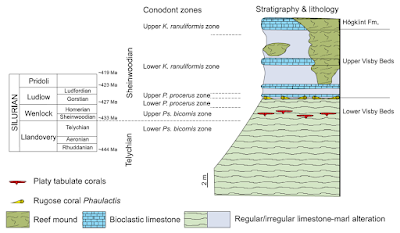 Tabulates were colonial Corals thought to have been ecologically similar to modern Scleractinian Corals, and like modern Corals, their colonies were capable of forming a variety of shapes. In modern Corals, the shape of the colony is closely related to the environment that the colony inhabits, and it seems a reasonable assumption that the same would have applied to Tabulate Corals. Flat shapes in Coral colonies today are associated with two environments. Corals resting on soft sediments tend to assume flattened shapes to avoid sinking into the sediment. The Visby Beds Corals are preserved on top of bioturbated marls, which would have been soft sediment when they were laid down, making this a possible interpretation of the flat shape of these Corals. However modern corals adopting such a strategy tend to be a at most a few centimetres across, while the Visby Corals are typically tens of centimetres in width, suggesting that if this is why the Corals were flat, then they are still not an exact ecological match. Photosynthesising Corals in the mesophotic zone on the lower part of reefs today also adopt this shape, forming plates that spread out as much as possible to catch the maximum amount of thin light; these Corals closely resemble the Visby Corals in both size and shape, suggesting a good ecological match. 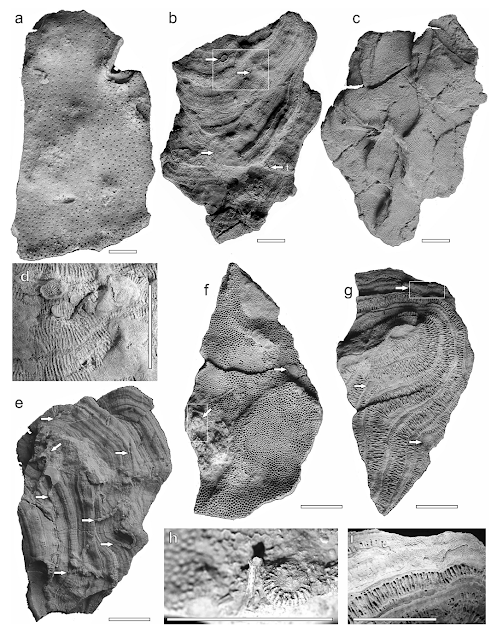 Zapalski and Berkowski further observe that many of the Coral colonies have encrusting organisms, such as Broyzoans and Brachiopods, on their undersides. Such organisms can grow on the underside of a Coral colony sticking out from the lower part of a reef, or one that rests upon soft sediment that has become overturned. The Lower Visby Beds are thought to have been laid down below the storm wave base, where currents sufficiently fierce to overturn large Coral colonies would have been rare, and all of the colonies that could be found in place within the beds were in the correct orientation, which would require that colonies were overturned by a freak strong current, colonised by encrusting organisms, overturned again, and then buried, a highly unlikely set of circumstances. 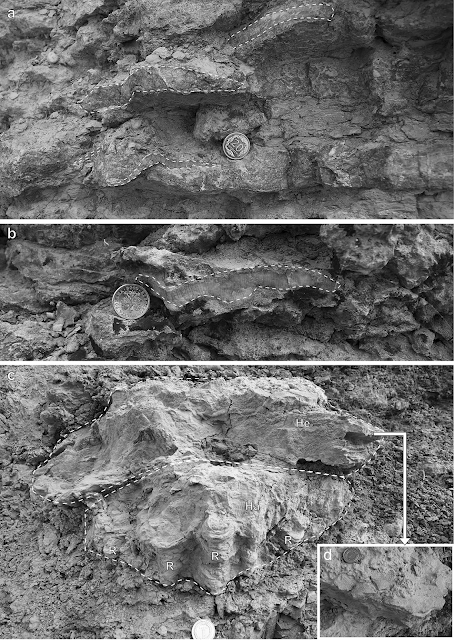 Examples of platy Tabulate Corals in situ in Högklint and Ireviken. (a), (b) Dashed lines show the platy colonies in situ, Högklint. (c) Micro patch reef, with massive Halysitid Coral (Ha) at the bottom, with incorporated solitary Rugose Corals, all in situ (R) is probably a Cystiphyllid overgrown by a platy, possibly photosymbiotic Heliolitid, Ireviken. (d) Top view of Heliolitid Tabulate, with corallites and colony structure visible. (a), (b) Coin diameter is 18.5 mm; (c), (d) coin diameter is 23.0 mm. Zapalski & Berkowski (2018).

Zapalski and Berkowski reason that Corals on reefs within the upper layers of the photic zone show a wide range of morphologies, making it hard to identify exact analogues in the fossil record, while photosynthetic Corals in the mesophotic zone, where just about enough light is available for photosynthesis, show a much more limited range of morphologies, and therefore should be easier to detect in ancient deposits. The Visby Beds Tabulate Corals show very similar morphologies to modern mesophotic zone Corals, and appear to have grown in a similar environment, making it highly likely that these Corals were also photosynthetic. The strata that produce these Corals have been dated using Conodont biostratigraphy to about 430 million years ago (Conodonts were small, worm-like animals related to Vertebrates, which had highly distinctive jaw elements; importantly each species had its own, easily identifiable jaw elements, and a very limited time range, so that when found these jaw elements can be used to date rocks by correlation to other areas where the same Conodont fossils are found and which can be dated by other methods), implying that Corals had acquired photosynthetic zooxanthellae as symbionts by 430 million years ago. They further observe that similar beds are known to exist on the nearby Estonian island of Hiiumaa which are thought to be about ten million years older, though this will require further exploration to confirm. 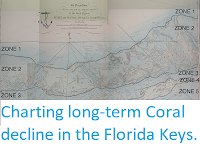 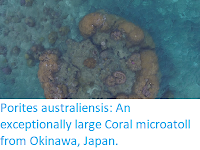 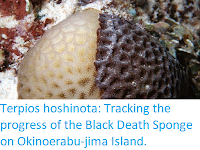 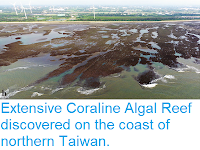