The trachea of Mammals is a relatively flexible cartilaginous and membranous tube that extends from the cricoid cartilage of the larynx to the middle mediastinum, where it bifurcates into the main bronchi. The framework of the trachea is formed by C-shaped plates of hyaline cartilage ('tracheal rings'). These vary in shape according to the species and in some cases according to the location on the trachea. The number also varies according to the species. The cartilaginous rings provide the tube: (i) some rigidity, otherwise it would collapse as the lungs expand; (ii) some expansion, to be able to accommodate any increase in air volume, by means of the flexibility of the hyaline cartilage, and the dorsal incompleteness of the rings; and (iii) flexibility and extensibility, to be able to follow the movements of the head, neck and larynx. Tracheal cartilages originate from the splanchnic mesoderm and form the true tracheal skeleton.

Xenarthrans are a particular group of Mammals, characteristic of the Neotropical Region, widely represented in the South American fossil record, both in temporal extension and frequency of records. The Family Glyptodontidae is a group of armored Xenarthrans, whose representatives reached large to very large sizes, even exceeding 2300 kg, and are recorded from the middle Eocene to the early Holocene. From an evolutionary stand point, the evidence strongly suggests that Glyptodonts are a monophyletic group.

In a paper published in the journal Acta Palaeontologica Polonica on 7 February 2020, Martín Zamorano of the División Paleontología de Vertebrados at the Museo de La Plata, describe several fragments of tracheal rings and the cricoid cartilage assigned to Panochthus sp. Zamorano intends to contribute to the understanding of these cartilages, which allow the indispensable entry of oxygen into a Mammal body, an issue that is poorly studied in the extant Mammals and seemingly never studied in extinct forms.

The fossil material was found on the right margin of the Salado River, near the city of General Belgrano, Buenos Aires, Argentina. The remains were collected in sediments of the Luján Formation dated between about 14 and 12 thousand years ago (Late Pleistocene), in the transitional limit between La Chumbiada Member (about 14 to 12 thousand years old, Lujanian Stage/Age) and Gorch Member (about 11.5 to 5 thousand years old), downstream the Paraje La Chumbiada, near Estancia La Invernada. In Paraje La Chumbiada, a gray to black clayey deposit has been interpreted as a palaeolagoon, in which several remains of fossil Mammals were collected (Hippidion principale, Smilodon populator, Doedicurus clavicaudatus, and Megatherium americanum, among others), which corroborated the age of the level. 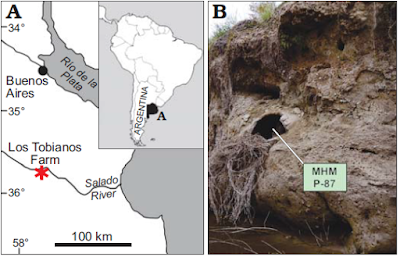 (A) Geographic location of studied area within Buenos Aires Province, Argentina (inset) near General Belgrano city, Los Tobianos Farm, asterisk indicates where the studied specimen was discovered. (B) Photo of the outcroup along the Salado River right bank, the site where Panochthus sp. (MHM-P 87) was found. Zamorano (2020).

In general, the material recovered in the area where the remains studied here were collected are exceptionally preserved. Fossils of Mammals recovered in this area contain large amounts of preserved collagen, and mummified exoskeletons of Insects were found. The high percentage of collagen preserved is a rare condition with respect to the rest of the Pleistocene deposits of the Pampas region, and this is probably what allowed the exceptional preservation of the cartilage studied by Zamorano.

The specimen, MHM-P 87, comprises twenty-three fragments of tracheal rings, including fragments that probably belong to the crioid cartilage. The specimen consists of part of the skull (badly preserved), mandibular rami, postcranial bones (both humeri, radii-ulnae, both femurs, tibiae-fibulae, several elements of the carpus and tarsus, thoracic and lumbar vertebrae, cervical ribs) and the almost complete dorsal carapace. Because of the exceptional preservation of this material, fragments of tracheal rings, the crycoid cartilage and, some elements of the hyoid apparatus could be identified.

The tracheal cartilages are mostly small and fragile fragments; their thickness does not exceed 3 mm. Twenty-three fragments of these tracheal rings were found, twelve of them belong exclusively to lateral sectors 19–54 mm in length and 6–8 mm in width. The three longest of these last fragments are fully curved (none of them cover the lateral sector completely), whereas the other nine are almost straight. Eight fragments belong to ventral portions of the rings; in this category are also included fragments of fused ventral and lateral portions, three of them, the largest ones, probably belong to the cricoid cartilage (this latter is similar in shape to a tracheal ring, although larger). A tracheal ring was reconstructed; it is 80 mm high and 60 mm wide. Its diameter occupies approximately 15% of the skull height (without the mandible). The tracheal rings of Panochthus sp. would belong to a cylindrical trachea, slightly flattened on the dorsal and ventral sides, the free ends of each ring (that is, on its dorsal side) overlap, the left one above the right one. 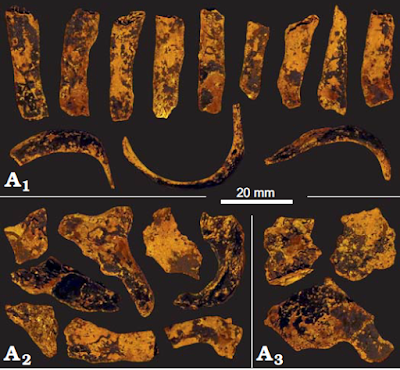 During inspiration the air pressure is lower in the trachea than the atmospheric pressure, and without the tracheal rings, the trachea would collapse. For this reason the tracheal rings are totally indispensable for animals with lung breathing. In Mammals these rings have the only basic and fundamental function of maintaining an open channel that allows the circulation of air from the larynx to the lungs and vice versa. A previous comparative analysis studied the structure and rigidity of the tracheae of Marine Mammals and observed how the flow of air circulating through the tracheae behaved during diving. The rigidity of the trachea, deduced from the shape of the rings, is expressed in the capacity not to collapse. For some authors, this rigidity is an adaptation of Marine Mammals. However, several previous studies stated that it is similar to the rigidity of the tracheae of Terrestrial Mammals. In this sense, it has been suggested that Sus scrofa (Sus scrofa crofa and Sus scrofa domestica) is the Terrestrial Mammal most similar to Marine Mammals. In turn, Donald Harrison and Susan Denny suggested that the influence of the shape and size of tracheal rings has to be taken into account on the running speed reached by mammals. To test this hypothesis, they used the relationship between the area occupied by the glottis lumen, the tracheal lumen (generated by the tracheal ring) and the body mass. In fossil Mammals, these relationships cannot be calculated as a whole. Although the body mass has been estimated in several species of different groups the surface of the glottis lumen is unknown, and as for the lumen of the trachea, Zamorano's contribution is the first to report, figures and describes a tracheal ring of a fossil Mammal. Tracheal rings have only previously been published in extinct Birds: Llallawavis scagliai (Cariamiformes, Phorusrhacidae) and Vegavis iaai (Anseriformes, Vegaviidae); and other dinosaurs: Scipionyx samniticus (Theropoda, Coelurosauria).

In the literature, data on cricoid cartilage and tracheal rings of living Xenarthrans are very scarce. Virginia Naples states that the cricoid cartilage is partially ossified in the skull of the Giant Anteater Myrmecophaga tridactyla, and that small movements between this and the back of the tracheal rings are likely; in Myrmecophaga tridactyla the trachea begins at the sixth cervical. For the Folivores, it has been reported that the differences in length of the trachea between the Tree Sloths, Choloepus, in which it is extremely short and Bradypus, in which it is very long (25-28 cm) and would be probably correlated with the wide range of movement between the neck and the head.

Thanks to exceptional preservation conditions, three cartilaginous structures of the neck of a Glyptodontid referred to the genus Panochthus are preserved, corresponding to a first record in an extinct Mammal. Two of these structures belong to the laryngeal zone, the thyroid cartilage described in was described in a previous study and the cricoid cartilage, and the third originates in the tracheal zone, the cartilages of the tracheal rings; the last two structures are presented in Zamorano's new communication.

In summary, the tracheal rings of Panochthus sp. correspond to a cylindrical trachea, slightly flattened on the dorsal and ventral sides, the free ends of each ring overlap, the left one above the right one. Similar to those of Sus scrofa domestica and Zalophus californianus, but those of  Zalophus californianus resemble even more those of Panochthus sp., since these rings are flattened dorsally and ventrally.

There are currently no other studies on tracheal rings in extinct Mammals and in extant Xenartrans; similar studies in extant Xenartrans would provide valuable information on their adaptations. Future, more detailed analyses of the MHM-P 87, and possibly new findings of exceptionally preserved fossils could provide information on the palaeobiological implications of this structure in Glyptodonts. Likewise, the new data on the trachea and its adaptations in Glyptodonts would allow to make inferences in other fossil Mammals. 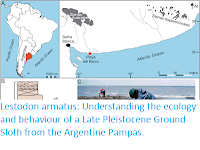 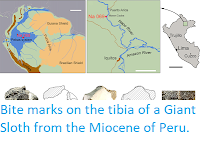 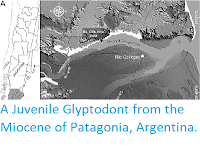 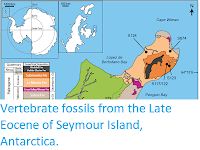 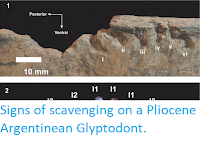