Signs of scavenging on a Pliocene Argentinean Glyptodont.

Glyptondonts were large, heavily armored mammals related to Armadillos that evolved first appeared in South America in the Miocene, spread to North America in the Pliocene and became extinct at about the same time as the earliest humans entered the Americas (this is almost certainly not a coincidence). The largest members of the group are thought to have weighed over a tonne and exceeded 3 m in length.

In a paper published in the journal Palaeontologia Electronica on 23 May 2013, a team of scientists led by Martín de los Reyes of the Facultad de Ciencias Naturales y Museo de La Plata describe a Glyptodont specimen from the late Pliocene of the Pampean region of Argentina. This is the first Glyptodont showing signs of predation from South America (several are known from North America, mostly associated with archaeological, i.e. human, sites), and is from an early stage in the Great American Interchange, when many of the large Marsupial predators that had dominated earlier South American faunas had disappeared, but before the arrival of Placental Carnivore groups such as Cats, Dogs and Bears that dominate modern faunas.

The Glyptodont specimen is referred to the species Eosclerocalyptus lineatus. It is buried on its side in fine-grained fluvial sediments, but with the hemimandible, ribs and vertebrae outside the dorsal carapace, suggesting disturbance of the corpse by a predator or scavenger.

One of the extracted bones, a vertebrae has a distinct bite-mark, which de los Reyes et al. interpret as closely matching the dentition of Capalmalania altifrontis, a large member of the Racoon Family known to have been present in the area at the time when the Glyptodont lived. While Capalmalania altifrontis had a (muscle supporting) sagittal crest and short snout similar to that of a Bear or Hyena, it is unlikely to have been able to actively predate the much larger Glyptodont, leading de los Reyes et al. to suggest this was the result of scavenging activity rather than predation. 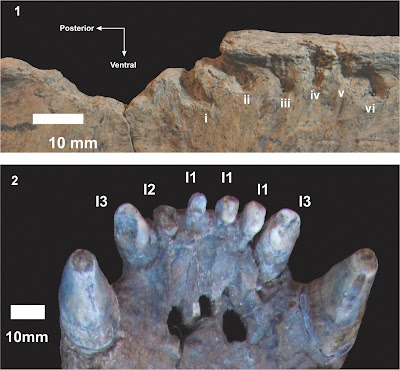 (1) Rib of Eosclerocalyptus lineatus showing a row of pits interpreted as a bite mark. (2) The dentition of the snout of Capalmalania altifrontis. De los Reyes et al. (2013). 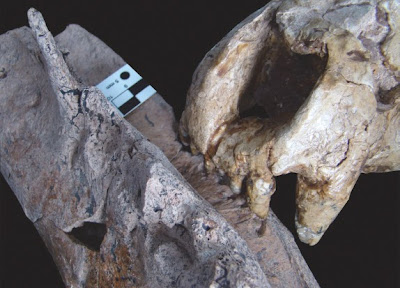 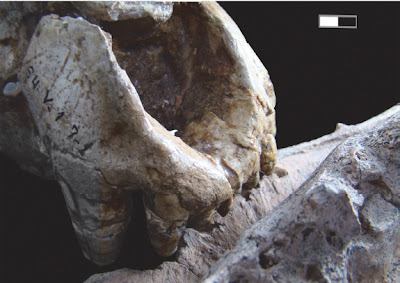 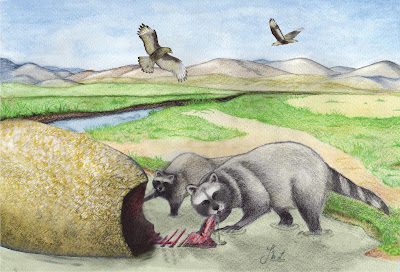 See also A Giant Camel from the mid-Pliocene of Ellesmere Island in the Canadian Arctic, New Caviomorph Rodents from the Early Oligocene Tinguiririca Fauna of the Andean Main Range of central Chile, Three new species of Tapir from the Early Eocene of Pakistan, What killed the Australian Thylacine and New species of Bat discovered in Vietnam.