South Africa is considered to be a key area for the understanding of the history both of Hominins as a group and Modern Humans as a species. Despite this importance, only a limited number of sites attributed to the Middle Stone Age, an important developmental stage for Modern Humans, have been excavated within South Africa, and only six from KwaZulu Natal. The Holly Shelter site on Fountainhill Estate near Wartburg is one of only two such rockshelters in KwaZulu-Natal which are not located in coastal areas, the other being Border Cave, on the western scarp of the Lebombo Mountains.

Holly Shelter was first investigated by archaeologist Gordon Cramb in the 1950s. The site produced both organic material and stone tools, a combination with the potential to yield a great deal of information about the period using modern techniques unavailable in Cramb's time. Recent re-examination of Cramb's material has suggested that it is similar to the assemblage recovered from Sibhudu Cave, about 40 km to the north of Durban, which would make the material likely to be 50-60 thousand years old, although the site itself has not been dated.

In a paper published in the South African Journal of Science on 30 November 2022, Gregor Bader of the Senckenberg Centre for Human Evolution and Palaeoenvironment at the University of Tübingen, and Manuel Will of the Department of Early Prehistory and  Quaternary Ecology, also at the University of Tübingen, present the preliminary results of a new investigation at Holly Shelter, which aimed to establish whether there are any intact archaeological deposits left at the site, whether the site features a discernible stratigraphic sequence which can be dated, is there any useful preservation of organic remains at the site, and whether distinct techno/typological units can be identified within the stratigraphic sequence. 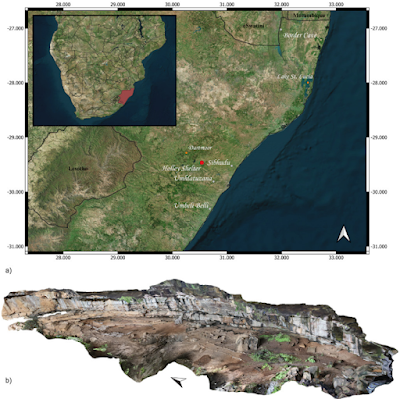 (a) Location of Holley Shelter and other archaeological and palaeoenvironmental sites mentioned in the text.  (b) Three-dimensional model of the site produced with Agisoft Metashape Professional. Gregor Bader in Bader & Will (2022).

In the early 1950s Gordon Cramb excavated two areas close to the entrance of Holly Shelter, uncovering two distinct layers of occupation, the upper one producing a Later Stone Age technology, and the lower a Middle Stone Age technology, including bone tools. Bader and Will refrained from carrying out excavations close to this area, as there are now several large rock slabs lying on the surface here. Cramb's later investigations concentrated on an are further north, and deeper within the cave, an area which Bader and Will also concentrated on, as it was clear of large surface debris, and appeared more likely to yield a full stratigraphic sequence, excavating two new test trenches. 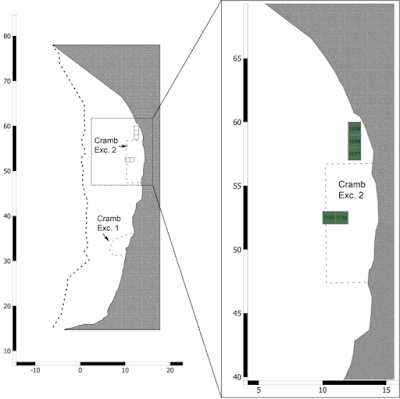 Excavation plan of Holley Shelter. Cramb Exc. 1 and 2 mark the areas of Cramb’s excavations in the 1950s. Exc. 1 was described by Cramb as the ‘Smaller habitable area’, Exc. 2 as the ‘Larger habitable area’. Green squares were excavated in 2022. Gregor Bader in Bader & Will (2022).

Both of Bader and Will's new trenches confirmed the existence of layered archaeological remains. The northern trench produced an upper layer of disturbed soil 5-10 cm thick, beneath which was a layer of orange-brown sandy silt, with charcoal inclusions. This layer contained several small hearths (former fire sites) as well as Middle Stone Age stone artefacts, predominantly made from hornfells, and a significant amount of faunal remains. Beneath this was a grey sandy silt layer. At the southern site this grey sandy silt produced a large hearth which covered most of the excavated area, as well as a large number of stone artefacts, including numerous splintered pieces similar to the ones identified in the Cramb collection, unifacial points, and frequent blades and points with faceted platforms. This layer also produced a lot of faunal remains, along with large charcoal fragments and Plant fossils. In both layers the finds were concentrated at the hearth sites, with little material in the surrounding area. 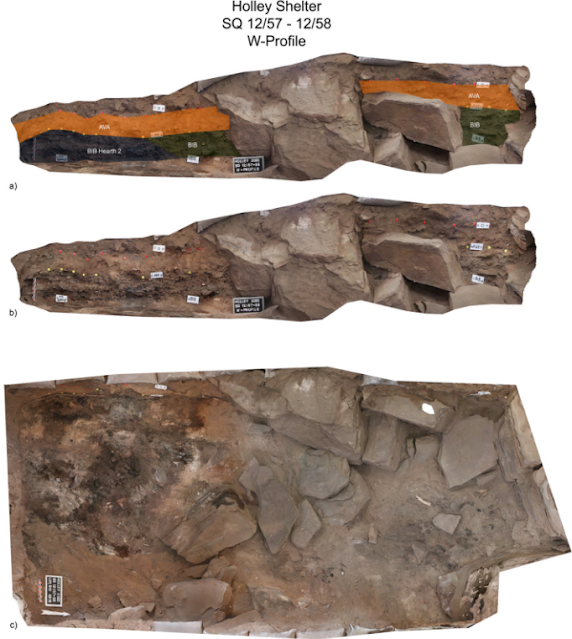 The lithic assemblage recovered by Cramb contained a high proportion of modified tools compared to debitage (flakes). This was previously assumed to be bias on the part of the mid-twentieth century archaeologist, who was operating at a time when the importance of small flakes was less well understood, and these were commonly overlooked. However, Bader and Will's assemblage contains a similarly high proportion of large tools, with  splintered pieces and unifacial points being the most common items in both collections. 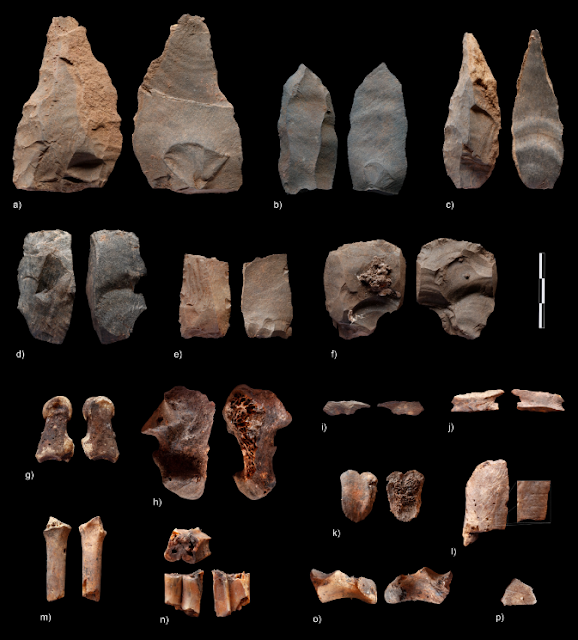 Bader and Will's excavations revealed a clear stratigraphic sequence at Holley Shelter, with archaeological evidence including material excellent organic preservation and clearly delineated anthropogenic hearth features. The sedimentology of the tool-bearing layers clearly matches Cramb's original description, as does that of the underlying layers, providing support for the accuracy of Cramb's descriptions.

The low proportion of debitage to finished tools, particularly when compared to assemblages from coastal sites in KwaZulu-Natal, suggests that the tools were not being manufactured on site, and the combination of these with the presence of multiple small hearth features, suggests that the site was repeatedly used as a location for short stays, while the coastal sites were likely to be more permanent settlements.

Bader and Will uncovered numerous pieces of charcoal from both artefact-producing layers at Holley Shelter, which opens the potential to establish a timeline for the site based upon radiocarbon dating. The excellent preservation of much of the organic material recovered from the site also has the potential to reveal much about the climate and ecology of the interior of KwaZulu-Natal during the Late Pleistocene, data which is at present not available. Furthermore, the archaeological evidence has much to tell us about the people living in this area at the time, and how they interacted with the wider environment.