An early Cricket from southeast India.

The Protogryllidae are a family of early Crickets known mainly from the Jurassic of Eurasia, with some members known from the Late Triassic of South Africa and the Early Cretaceous of England. It is doubtful that the group is truly monophyletic (including all the species descended from the first member), but rather it includes a number of early Crickets which cannot be placed into any other group; it is likely that all other Cricket groups are derived from this one.

In a paper published in the January 2012 edition of the Journal of the Kansas Entomological Society, Ricardo Pérez-de la Fuente of the Departament d’Estratigrafia, Paleontologia i Geociències Marines at the Facultat de Geologia at the Universitat de Barcelona, Sam Heads of the Section for Biodiversity & Systematics at the Illinois Natural History Survey at the University of Illinois, and Ismael Hinojosa-Díaz and Michael Engel of the Division of Entomology (Paleoentomology) at the Natural History Museum and Department of Ecology & Evolutionary Biology at the University of Kansas, describe a new species of Protogryllid from Andhra Pradesh State in southeast India, the first Protogryllid from India, which was not attached to Eurasia in the Jurassic. 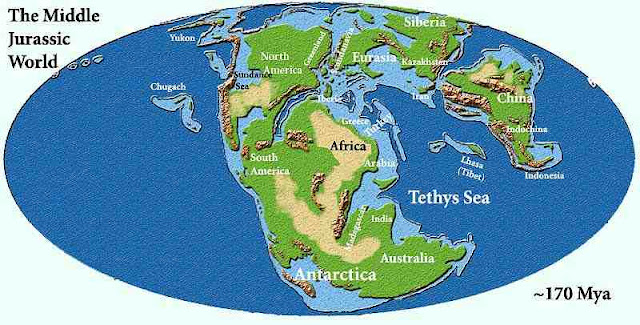 Map showing the positions of the Earth's continents during the Middle Jurassic. Palaeos.

The new species is placed in the pre-existing genus Protogryllus, which has previously been used to describe fossils from the Late Triassic to Early Cretaceous of England, Germany and South Africa. This does not imply that these species are particularly closely related, as would be the case with modern species placed in the same genus, but rather that, given the fragmentary nature of the fossils, there is little to differentiate them, and that they are probably all more closely related to one-another than any of them is to anything else. It is highly likely that should more complete specimens become available, that many species would be removed from this genus.

The specimen is given the specific name lakshmi, after the Hindu goddess of wealth and prosperity. Protogryllus lakshmi is described from a partial forewing of a female animal, measuring 9.5 × 4.2 mm. It was found in the Middle Jurassic Kota Formation at the Tasch Outcrop, 2.5 km southeast of Kadamba Village in Adilabad District, Andhra Pradesh.

See also What Jurassic Katydids did.