On Thursday 9 August 2012 the Royal New Zealand Air Force spotted a raft of pumice-stone (volcanic rock filled with gas bubbles that floats on water) covering an area nearly 26 000 km², roughly 1000 km north  of North Island, in the Kermadec Islands, a New Zealand possession. This discovery was later confirmed by the Royal New Zealand Navy ship HMNZS Canterbury, and by NASA's Aqua Satellite. This is believed to have originated from an eruption on Mount Monowai (or Orion Seamount), a submarine volcano between Tonga and the Kermadecs. 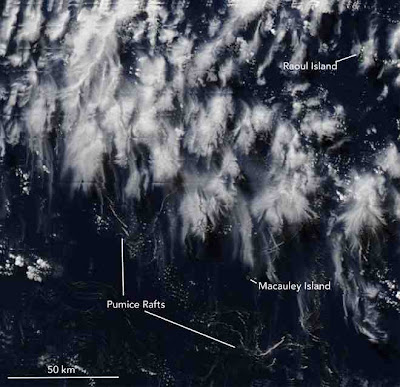 
Mount Monowai lies on the Tonga/Kermadec Ridge, halfway between the two groups of islands. It rises from a seafloor 1500 m deep to 132 m below the surface. It is an active volcano, with at least six eruptions since 2000. Like all the volcanoes of the Kermadec and Tonga Islands it is fed by the subduction of the Pacific Plate beneath the  Australian Plate along the Kermadec/Tonga Trench. As the Pacific Plate sinks into the Earth it is warmed by a combination of heat from friction with the overlying Australian Plate, and heat from the planets interior. This leads to partial melting of the Pacific Plate, with some of the melted material rising through the overlying Australian Plate as magma, fueling the volcanos of the Kermadec/Tonga Ridge. 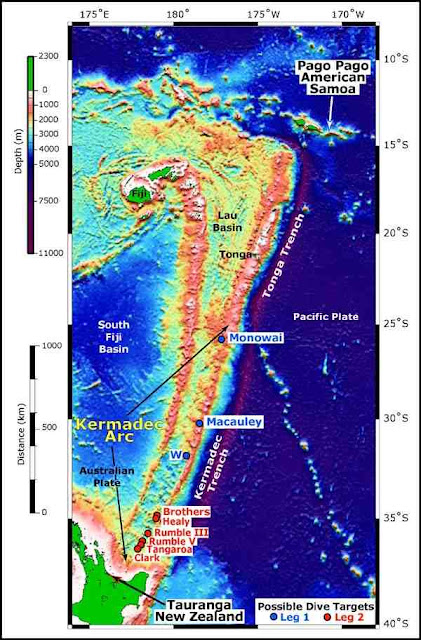