Massive deep Earthquake beneath the Sea of Okhotsk.

On Tuesday 14 August 2012, slightly before 1.00 pm local time (slightly before 3.00 am, GMT), a massive Earthquake occurred beneath the Sea of Okhotsk, roughly 50 km to the east of Sakhalin Island  in the Russian Far East, which the United States Geological Survey recorded as measuring 7.7 on the Richter Scale, at a depth of 625.9 km. This is a very large Earthquake, but very deep and not therefore particularly dangerous, as much of the energy from the quake is dispersed by the rocks between the quake center and the surface. There have been no reports of any casualties or damage associated with this quake, but it was felt as far away as Japan. 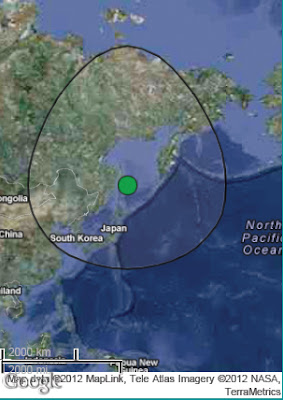 Map showing the area over which the 14 August 2012 quake could potentially be felt. The area would be circular on a globe but is distorted on a flat map. Google Maps/Geoscience Australia.


The Sea of Okhotsk and the Kamchatka Peninsula lie on a separate tectonic plate, the Okhotsk Plate, which is bounded by the North American Plate to the northeast, the Eurasian Plate to the Northwest, the Pacific Plate to the southeast and the Amur Plate, which underlies much of China, to the southwest. The Pacific Plate is being subducted beneath the Okhotsk Plate, fueling the volcanoes of the Kamchatka Peninsula, and to the west, occasional deep Earthquakes beneath the Sea of Okhotsk, due to friction between the two plates.

See also Earthquake shakes the Kamchatka Peninsula, Russian oil rig capsizes and sinks in under 20 minutes in the Sea of Okhotsk and Earthquakes on Sciency Thoughts YouTube.