Curiosity about to set down on Mars.

On Monday 6 August 2012, at 5.31 am GMT, NASA's Curiosity Rover is due to touch down in Gale Crater, on the surface of Mars. It will do this using a unique descent method designed to cope with the difficulties caused by Mars's thin atmosphere, which is to thin for parachutes to work as effectively as they do on Earth, but thick enough to cause stability problems during a rocket-assisted descent like those used by the Apollo Lunar landers. Curiosity will aerobrake (slow by friction with the atmosphere) inside a carbon-impregnated ceramic heatshield to within 10 km of the surface, during which time it should decelerate from 5800 m/s to 470 m/s. It will then deploy a parachute to slow it further, hopefully reaching 100 m/s at an altitude of 1.8 km. For the final part of the descent Curiosity will be using an entirely new technology, the Sky Crane, which will slow the landing platform further using rocket thrusters, while the rover itself is lowered to the ground on a 7.6 m cable. Once the rover reaches the ground the rocket thrusters will accelerate, lifting the landing platform away from the rover to crash-land at a safe distance. 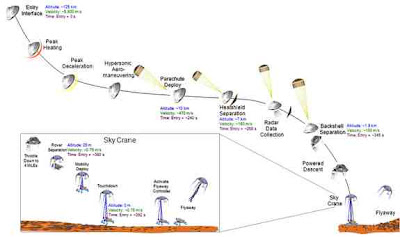 
Curiosity was launched from Cape Canaveral on 26 November  2011. It is designed to study the geology and climate of Mars, with a view to determining whether the planet could ever have supported life, and paving the way for a future manned mission. The Gale Crater landing site was chosen as it is one of the lowest points on Mars, so if Mars did once have oceans that have subsequently evaporated away due to the thin atmosphere and low gravity of the planet, they should have persisted longest here, and therefore, logically, any geological evidence of this is more likely to have survived here than on other parts of the planet, where the oceans would have disappeared longer ago.