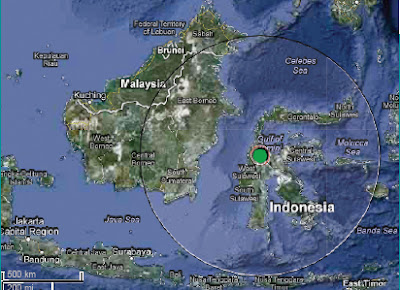 Map showing the area affected by the quake, which would have been felt within the black circle, and caused damage within the red circle. Geoscience Australia.

The tectonic situation beneath Sulawesi is complex, as it is caught in the collisional zone between the Eurasian, Pacific and Australian Plates. The north of the island is located on a breakaway section of the Eurasian Plate, called the Sangihe Plate. To the east lies the remnant Molucca Sea Plate, which is being subducted beneath both the Sangihe Plate and the more easterly Halmahera Plate, leading to Earthquakes and volcanism on Sulawesi and the islands of the Sangihe Ard in the west and the islands of the Halmahera Arc in the east. 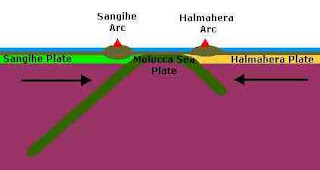 The subduction of the Molucca Sea Plate beneath the Sangihe and Halmahera Plates. What on Earth.

The south of the island mostly lies on the Banda Sea Plate, which is being subducted beneath the Timor  Plate to the south, leading to further Earthquakes, as well as volcanism in the Timor Arc. The southwesternmost tip of Sulawesi lies on the Sunda Plate, with a complex system of convergent and transform faults bisecting the South Sulawesi Peninsula.