On Friday 3 August 2012, the Indian Cabinet gave the go-ahead to a planned unmanned mission to Mars by the Indian Space Research Organisation, which could now launch as early as November 2013. The exact details of the probe have not yet been published, but it will apparently study the geology, climate and evolution of the planet, as well as its suitability to sustain life. The probe will carry   about 25 kg of scientific experiments and will cost an estimated 4-5 billion rupees. It will be launched with a Polar Satellite Launch Vehicle rocket, similar to the one that launched the Chandrayaan-1 Lunar Probe in 2008. 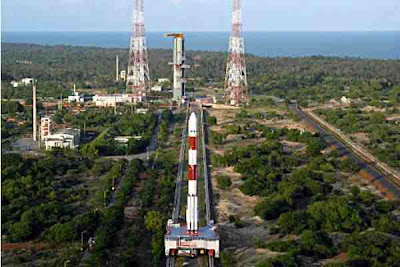 The Polar Satellite Launch Vehicle carrying the Chandrayaan-1 Probe on the launch pad at the Satish Dhawan Space Centre in Sriharikota. ISRO/AP.


India has been launching space vehicles since 1980, and is becoming increasingly ambitious, despite occasional setbacks, such as the crash of a satellite launch vehicle into the Bay of Bengal in 2010, and concerns that it diverts money from more vital infrastructure projects. The Chandrayaan Probe was internationally recognized for its scientific achievements, notably the discovery of water-ice on the Moon. The nation hopes to begin manned space missions within a decade.

See also Curiosity about to set down on Mars, Dutch team plan colony on Mars, Human Rights Watch reports on mining in India, Fobos-Grunt crashes into the Pacific Ocean and Mars on Sciency Thoughts YouTube.